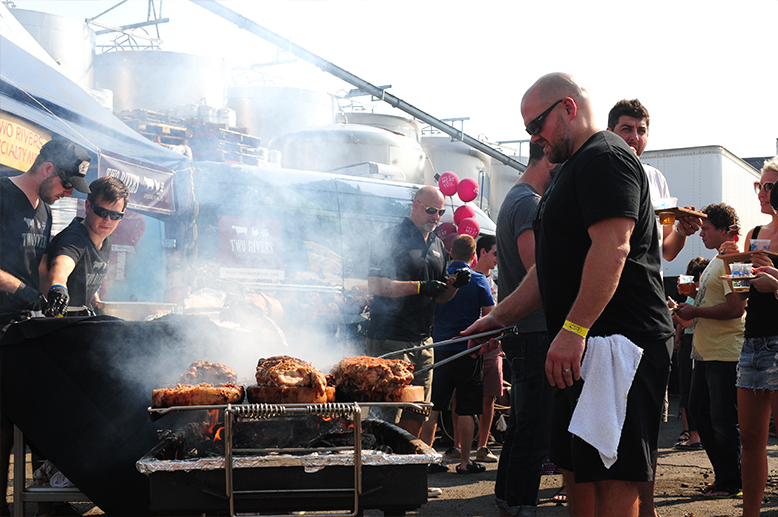 Just after 1pm on a hot Sunday afternoon I arrived to find a long, snaking line-up of people shuffling along Government Street toward the entrance of the Phillips Brewery’s “backyard”. The mood was upbeat, the smoke rising from dozens of grills shading the sky and, as I sniffed the air, whiffs of meat cooking drifted my way. All was good. I joined the back of the line and by the time I was inside, I found the party in full tilt boogie mode.

I went from table to table, driven to try as many bites as I could within the allotted time. With around 40 participating restaurants, I could see that wouldn’t be an easy mission to pull off. Although my efforts were heroic, my apologies go out to the beasts and chefs I missed.

A selection of Spanish charcuterie

Blood infused rye bread! (a partnership of The Whole Beast and Fry’s Bakery)

But it was not all indulgence. Plenty of local farms and suppliers were showcased. I saw signs that told the story of the farms on hand. It was good to see farms like Parry Bay, Ravenstone Farm, and Quist given their due. Thanks to the chefs for staying true to the local-is-better mission statement without sacrificing great flavor, creativity, and fun.

This year’s reiteration of the Brewery and The Beast: A Festival of Meat was the perfect synthesis of hot sun, near endless beer, and more meat than you could shake a grilled skewer at.  The gathered meatophiles left happy, sated, and vowing to return next year.

Brewery and the Beast