This is my favorite recipe to make on the first long day of teaming rain in the fall. The lengthy simmering and stewing times of the chili, mixed with the baking of the cornbread, keeps the house nice and warm, all the while filling it with wonderful aromas. Even though it’s a lot of work to make the chili from scratch (there are substitutions that make it faster), it is well worth the effort. The smell and taste of a homemade tomato sauce is beyond good. Sometimes when I make the sauce, I double all the ingredients so that I can make a pasta sauce with half the batch for a future night’s dinner.

Top with sharp cheddar cheese and/or sour cream. Serve with cornbread (recipe below) or dinner rolls.

14 fresh tomatoes (if really, really pressed for time, you could use canned tomato sauce, about 2 large cans which will cut the time down by a few hours)

4 tsp chili powder (or to taste)

Salt and pepper to taste

*If cooking from dry, you’ll need to at least start the beans the day before. I won’t explain how to cook beans from dry here. Check your favourite cookbook or website for directions, if needed. One good source is here at: Frugal Living in the Northwest 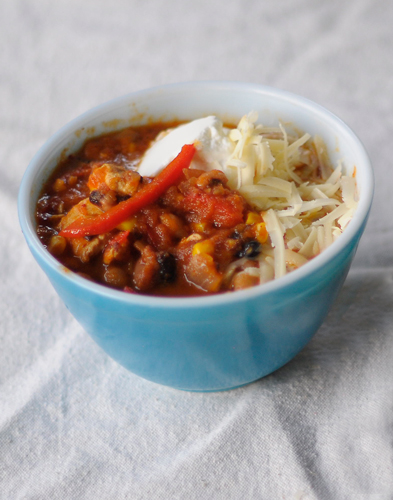 Start by removing the skin from the tomatoes. Score the bottoms of the tomatoes with an X (this will make peeling easier), and then blanch the tomatoes in boiling water for about 15-30 seconds or the skin starts to pull away from the flesh. Remove the tomatoes from the water and place in a colander until cool enough to peel. Remove the skin by pulling gently away from flesh (you can substitute the 4 cans of tomatoes here), chop them up to a uniform large dice and put them into a large pot on a medium heat and bring to a boil. Add the bay leaf and turn down the heat to a simmer, stirring the tomatoes often during the first hour of stewing. Stew for another hour, stirring occasionally.

While the tomatoes are stewing, fry the onions in a medium-size pan over medium-low heat in a little olive oil until they are translucent and just are just starting to brown, then remove the pan from the heat and set aside.

Once the tomatoes have been reduced, they are ready to strain. Remove from heat and pour the stewed tomatoes through a large colander into a large bowl to remove the seeds (this step is especially important if using canned tomatoes, as there might still be some skin or stems left in the can).

Place the tomatoes back in the stewing pot and add in the cooked onion and the garlic. Stir the pot thoroughly to mix the flavors. Let simmer on medium-low heat until desired thickness is achieved, approximately another 30 minutes for a thinner chili sauce and an hour for thicker chili.

While the tomatoes are simmering, get your beans ready by rinsing them in water until the water runs clear (whether using canned beans or you’ve cooked them from dry, you still need to rinse thoroughly) and set aside. Start to gently cook the cubed chicken in a frying pan on low heat in a little olive, turning the cubes to cook evenly, until done but still tender. Do not overcook the chicken cubes, as they will continue cooking in the sauce. The object here is to cook the chicken without overly browning it. (Do not cook the chicken cubes until they are crunchy or hard on the outside.)

Add the cooked chicken, beans, corn and red pepper to the tomato sauce and mix thoroughly. Let the combination cook for a few minutes until the red pepper has started to soften. Now is the time to season. Add the chili powder, red pepper flakes, and cumin to the pot and stir to mix the spices in thoroughly for a few minutes. Let everything simmer for another half hour over low heat until the vegetables are tender. Season with salt and pepper to taste. Take the pot off the heat and serve immediately. Ladle into bowls, top with a dollop of sour cream and shredded cheddar cheese and tuck a piece of cornbread on the side for dipping.

I have always found cornbread to be one of the greatest sides to any hot and thick style soup or stew. While still warm, it absorbs sauce faster than any dinner roll I’ve ever eaten. This recipe is great, because although it uses whole-wheat flour, it still yields the rich, characteristic golden-yellow colour and taste of traditional cornbread.

In a large mixing bowl, whisk together the dry ingredients until combined. In another bowl, melt shortening in either a microwave or on low heat in a small pot. After the shortening is melted, quickly cool it be placing it in the freezer. Do not let it re-harden; you want it just cool enough that it won’t cook the eggs when it is added to them.

While the shortening is cooling, whisk the milk and egg together until light bubbles form. Add the cooled shortening and stir until combined.

Add the liquid to the dry ingredients a third cup at a time. Stir often while you are combining. Mix until smooth—no lumps.

Grease an 8×8 pan, a 10-inch cast iron skillet, or a cast iron cornbread mold and add the mix to it. Place it in the oven on the middle rack. Bake for 25-30 minutes or when a toothpick inserted in the middle comes out clean. Let cool in pan for a few minutes, then flip it onto a cooling rack. Cut and serve while still warm, with plenty of butter to slather on it!