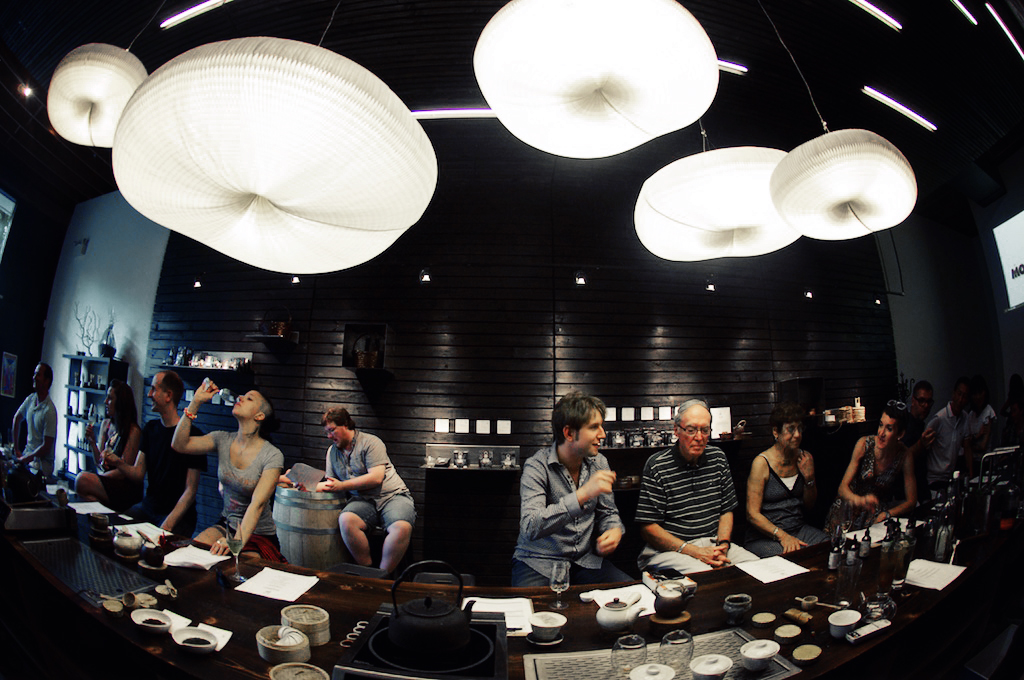 If coffee is in its third wave—Nabob (first wave), Starbucks (second wave), Stumptown and Intelligencia (third wave)—then tea is a little behind. It’s still in its second wave, where consistency is the definition of quality, and artificial flavours and other additives are still AOK. Kitsilano’s O5 (which stands for “Origin” and the five elements of earth, wind, fire, water, void) is ahead of its time, having more in common with Stumptown than David’s Tea. It’s one of the few Third Wave tea shops in the region, boasting some of the highest quality teas in the region, transparency of sourcing, single origin products (no blended teas), rare pu erh (a type of fermented dark tea produced in the Yunnan province of China), some of the freshest matcha around, and an active social calendar.

Co-owner Pedro Villalon is a chemical engineer who spent a decade in advertising and marketing. He discovered rare and high-quality teas after landing a job in China marketing for Proctor & Gamble. Eventually he moved to the safer streets and scenery of Vancouver. Here he met business partner Brian Noble, who had been involved with coffee and tea for many years. They started as an online specialty tea wholesaler offering tea tastings before opening the shop in August 2012.

The store is a breath of fresh air. O5’s design suggests a lab or workshop, with no doors separating staff from customers, and also borrows heavily from Asian tea culture, exemplified by the counter to stool height ratio, which replicates the effect of sitting cross legged on the floor. The result is a warm, open, relaxed, and deeply interactive space. A visit usually turns into a comfortable hangout of an hour or more.

And then there’s the tea. O5 offers the usual varieties found at specialty shops—green, white, black, oolong, tisanes, and, increasingly, pu ehr. But the quality is above and beyond anything on the market. There is a maximum of twenty teas at O5 at any time, and the selection changes constantly. O5 follows no specific tradition, essentially buying whatever tastes good. “85% to 90% of our teas are purchased directly from growers,” says Villalon. He and Noble hit the road for a few weeks twice a year. They visit farmers and suppliers in China, Taiwan, and Japan, armed with an iPhone and Google Translate. O5 often deals with growers who produce only 100 to 300 kgs annually, compared to the hundreds of tonnes from big commercial tea plantations.

“We have very few teas that are certified organic. Working with micro-farmers, many of whom are illiterate, it is not common to have certificates of any kind. We do strongly favour farmers who do not use pesticides or synthetic fertilizers.” They also inspect farms for biodiversity, signaled by the presence of insects, reptiles, amphibians and other crops, healthy trees, and healthy farmers. “If the farmers are over forty and look sick, flags are raised.” 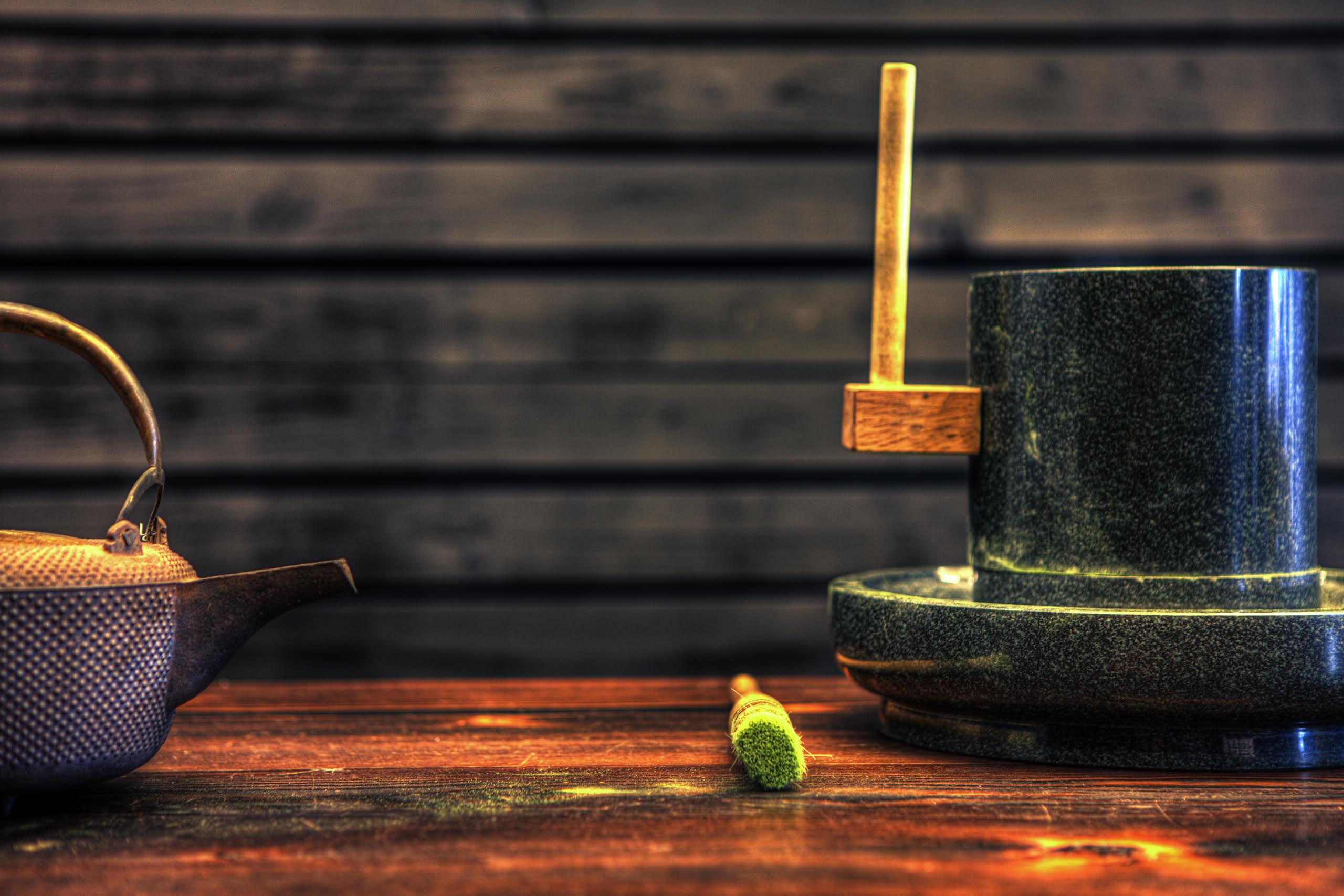 This attention to detail shows in the flavours. Korean Balhyocha Noeulb smells like it’s blended with chocolate nibs, while the Balhyocha MLH has a spicy fragrance. And the pu erh puts O5 into another league. Rare pu erh is expensive (up to $1120 per cake), and difficult to source. Access to the good stuff requires the backing of a local. That’s where O5’s relationship with Mr. Ming is vital. 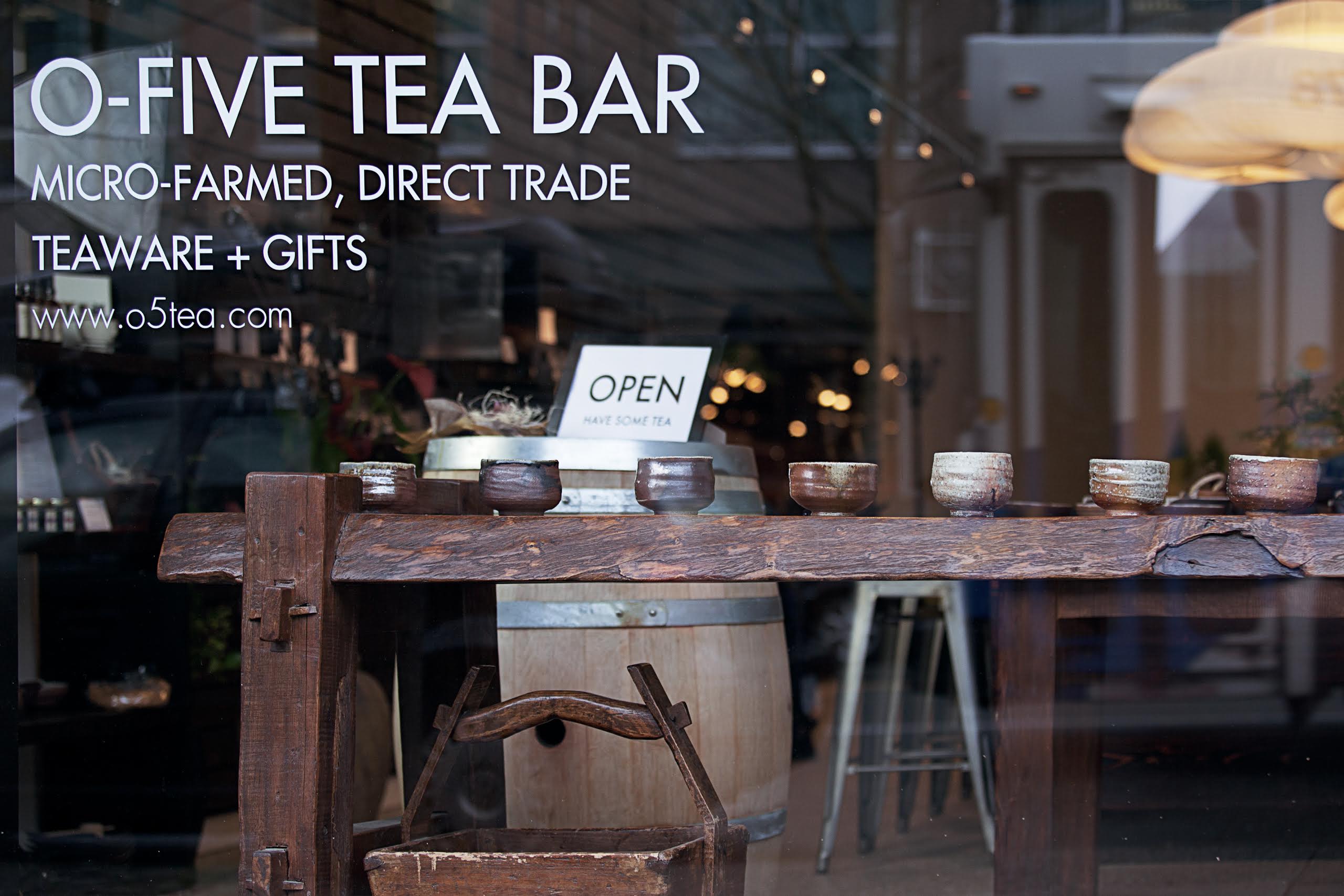 Villalon met Mr. Ming back in 2008 in Guangzou, China, in his tiny tea shop specializing in pu erh. Mr. Ming was eventually persuaded that it would be cool to set up something in North America. O5 offers tastings of high-quality pu erh which are surprisingly affordable when split between two or three people. O5 is also one of the few tea shops to make kombucha, the healthy, naturally fizzy fermented beverage derived from sweetened green or black tea. O5’s kombucha is unfiltered, non-pasteurized, and micro-brewed, without additives, in batches of sixty litres. Batches are kept for no longer than sixty days, but usually sell out before long that. I’m not the biggest kombucha fan, but I will go back for this since it was so fresh and tasty, with a minimal vinegary smell. In fact, I ordered their bottled product this weekend. They do offer food, but have kept the menu, according to Villalon, “Outrageously simple… It’s a complement to the tea.” It includes matcha macarons, mochi (Japanese sweets), chocolates, and quiche.

I suggest trying one of O5’s tasting flights. One I sampled recently included green, oolong and black teas chosen by one of the knowledgeable staff. The entire experience lasted about an hour, the perfect thing for a cold fall evening. To check out some of the rare pu erh, grab two friends and set up a tasting. For a set price, one of the senior tea severs will dish up about 20 cups of tea over an hour with a selection of fruits and nuts (they do the same thing for matcha). If you enjoy whisky tastings, you’ll love this. O5’s only drawback is that it might be a little too ahead of the tea curve. I did an informal poll of tea-lovers who all knew David’s Tea, but not one had heard of O5. This needs to change. Escaping the cold wet winter by tasting some of the finest teas in the region at O5 is a damn fine idea.   o5 website * Photos courtesy of o5 Tea

November | December issue on the stands. Read ...
Read More
For the ninth year in a row Rancho Vignola is setting up its Vancouver Island Harvest Sale here at the Mary Winspear Center in Sidney. Many of ...
Read More
Season’s Greetings EAT readers! We at EAT are looking forward to all the wonderful seasonal baking on offer around the city. One of the great joys ...
Read More
Masterclass Candied Citrus Holiday ...
Read More
One of BC’s newer wineries, Clos du Soleil is a collaboration of friends, nestled in the Similkameen, and fostered by the respected Lawrence and ...
Read More