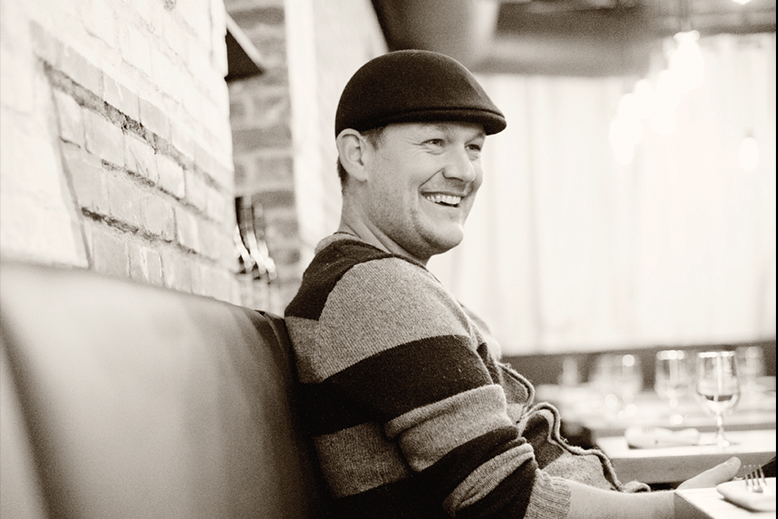 Down the Hall, 506 Fort St. Victoria | (778) 433-5535 | www.littlejumbo.ca There’s a new elephant in town, and its presence can’t be ignored. Little Jumbo is the brainchild of Shawn Soole, and the culmination of his 16 years in the industry. That’s right – at just 32 years, Soole has worked in the restaurant and bar industry for half his life, and his commitment to Little Jumbo is highly evident when you see the striking elephant logo tattooed on his forearm. “This restaurant is not just a whim, not just a flash in the pan,” asserts Soole. “I’m as committed to this as I have been to anything, and when I put my word on something, there is nothing stronger.”

Strong words indeed. I first met Shawn when he landed in Victoria eight years ago, one of the most recognized bartenders in his homeland of Australia at the time, and newly relocated here for love with the city’s honest and unpretentious food and drinks (and for his lovely now-wife). In his years here, he has spearheaded the craft cocktail revolution in Victoria, influenced bartenders across BC and elevated the BAR bar in Canada. His name and influence was cemented during his tenure at Clive’s Classic Lounge, where he was twice nominated by Tales of the Cocktail for Best Hotel Bar in the World, and where Shawn himself garnered a nomination for Best International Bartender – the only Canadian bar ever to be nominated in any category at that prestigious event. Shawn has hosted, emceed, judged, organized and competed in almost 50 cocktail competitions internationally, bringing a worldview approach on both the classics and the trends to Victoria.

So when he told me his plans to open his own place unlike anywhere in Canada, and to compete with the best in North America and beyond, I believed him without a doubt. I followed Shawn’s process of taking possession of the historic space down the hallway at lower Fort Street, documenting his progress with my camera during the 12 week strip down and complete rebuild. Shawn was there daily – and most times nightly too – overseeing the construction and collaborating with investors and designer Sara Gillespie every step of the way.

The space is a tribute to classic cocktails bars of old, and the pioneering spirit of Victoria. Housed in the ca. 1907 Pacific Transfer Building, the interior is warm exposed brick and worn wooden pillars. Antique light fixtures are juxtaposed with industrial light bulbs, a library of spirited books and shelves of period glassware have found a new home here, and a wall of black cushioned banquettes and booths beckon to sink into. And oh the bar – three hefty pieces of end grain western maple, assembled on site and hand stained with Fernet Branca for the perfezione patina. Even the name, Little Jumbo, is tribute to the Little Jumbo Saloon in New York, founded in 1966 and owned by ‘the father of American mixology”, Harry Johnson.

This Little Jumbo however, is more than ‘just’ a bar. The “unpigeonholeable” Shawn insisted that this project elevate hospitality beyond cocktails. It’s a restaurant first, overseen by Chef Justin Hardiman, and showcasing local producers every step of the way. Guests are greeted with Silk Road Tea’s Little Jumbo blend, the charcuterie features a rotating selection from Whole Beast and cheeses are selected by the team at Charelli’s. The small plates sharing menu includes dropping-juicy tender porchetta from Sloping Hills, locally procured vegetables (don’t miss the grilled kale with red wine gastrique!) and an ever-evolving salt program curated by NaCl Salt Works. Chef Hardiman and team prep nearly everything on site, from mustard to Porchetta di Testa and Duck Rillette, to Fernet-spiced mixed nuts and house pickles. The beverage program follows suit – Shawn focused on producers from the Island and Okanagan first, along with his cherry-picked international selections. The Vault (wine preservation machine) rotates, but when I was there included Vancouver sommelier Tom Doughty’s extremely rare 2007 Montagu Cellars 3 Barrel Merlot alongside legendary 2004 Chateau Musar from Bekaa Valley, Lebanon. Glassware is welcomed Riedel throughout, and a dozen+ wines by the glass highlight a love affair with boutique producers from BC: Clean Slate, Unsworth, Synchromesh, Averill Creek, Orofino, Terravista, Blue Mountain, Little Farm and more were listed when I was in. The printed cocktail list is small (a dozen rotating selections) but the back bar is mighty (250 spirits) and the bar team is able and willing. Shawn certainly hasn’t cut any corners – the plan was custom designed to his exacting specifications, and includes liquid nitrogen (ideal in classic gin martinis), the Perlini carbonation system, the cutest 1.5 inch ice globes and an the in-bar hydroponic unit for tenderly raising fresh herbs.

Though Little Jumbo has been opened just 6 weeks as of press deadline, word has spread fast and a no-reservations policy has meant queuing for a seat on busy Friday and Saturday nights. It does and does not feel like Victoria all at once – everything around you is local, historic and familiar, but with scope and breadth of the space, you could easily be in San Francisco or London. Keep an eye on this Little Jumbo, for it’s not going to be a little secret for long.

The article on L’Apéro in the May|June issue should have stated Chef Andrea Maiolo staged at The Courtney Room and Zambri’s and that he held the ...
Read More
May|June issue on the stands. Read ...
Read More
Jill Heffner, owner of the new Venus Sophia Tea Room on Fisgard, shares her family’s favourite recipe for scones. Perfect with a cup of Earl ...
Read More