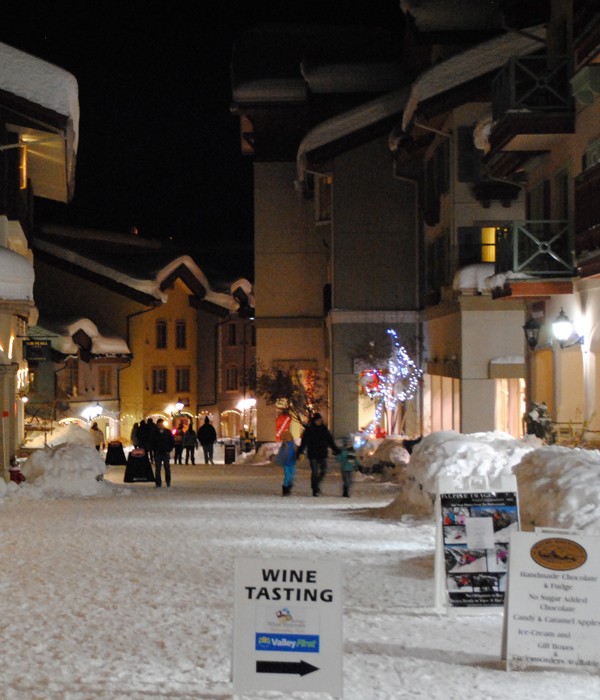 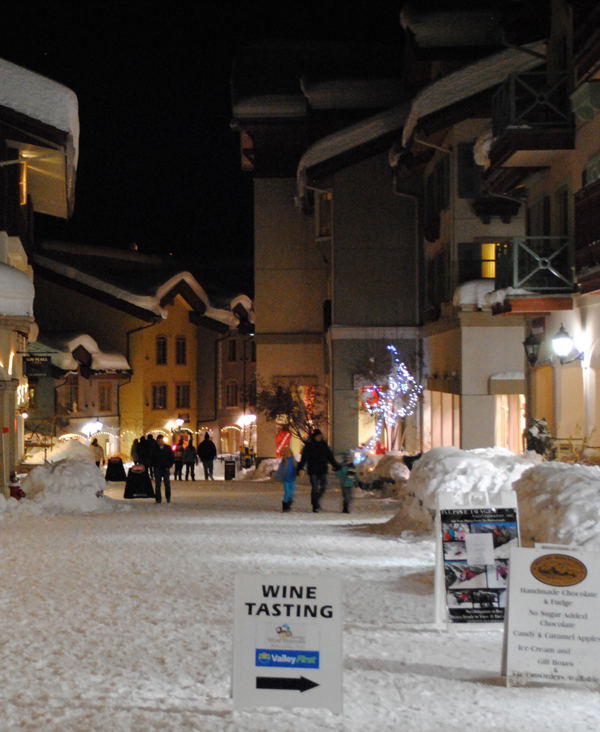 When we think of ski resorts, we imagine hot tubs and hearty appetites. Fresh powder calls to those inclined to hurtle down hills, and “après” is on the tip of every tongue. But there’s an evolution of taste happening on our slopes – and Sun Peaks Resort is on the right trajectory.

About one hour northeast of Kamloops, BC is the municipality of Sun Peaks, incorporated in June 2010. The resort community is home to more than 370 full-time residents and welcomes approximately 340,000 skiers annually. The original two-chair Tod Mountain 1961 version has grown into a comprehensive resort with 3,678 acres of skiable terrain, 882m (2,894’) of vertical, 124 trails and glades, 30 acres of cross-country trackset, 124 runs, 11 lifts, a 9-acre terrain park… and 2,000 hours of sunshine.

For the last 15 years, Sun Peaks Resort has also been home to the Winter Festival Of Wine.  Initially celebrated as an Icewine Festival, organizers changed the name to better reflect the increasing number of wines and wine-related activities at the weeklong event. This year, I attended on behalf of EAT for four wine and food-filled days (and nights).

2013 was the third year that Delta Sun Peaks Resort Executive Chef Steve Buzak cooked for guests at the Festival’s Wine Masters Dinner. Buzak’s culinary background spans almost two decades, including nine years on the Rocky Mountaineer  – bringing new meaning to a “mobile kitchen.” For those of us who have difficulty walking while a train’s in motion, it’s astounding to consider the level of skill (and balance) required to produce excellent cuisine on rails. Favourite dish: cold-smoked Ted’s Trout with caramelized fennel and macerated blueberry, paired exquisitely with Red Rooster Winery’s Reserve 2011 Pinot Noir.


A few favourite spots for good eats on the mountain are: Mountain High Pizza (grab a slice, or a whole pie), The Voyageur Bistro (Canadiana-cool abounds), and Sun Peaks Bakery (chef Megan’s carrot cake is light and cheerful, as is she).

When at a wine festival, one must do one’s best to appreciate the bounty presented. After cautious sipping and careful spitting (those spittoons fill quickly), a few standouts shone through:

The mountain is full of liquid chefs concocting drinks worthy of mention. I was invited to judge the Festival’s Winetenders Cocktail Shake-Off, where local bartenders compete to create a signature wine cocktail. Judges had the delicious task of sampling every beverage – though with seven contenders vying for top prize, the job wasn’t for the feint of palate. The winner: Angie Lafferty of Masa’s Bar with “Night of Seduction.” From its rich colour to edible sparkles, judges and guests were equally seduced – Angie took home both Peoples’ and Judges’ Choice. 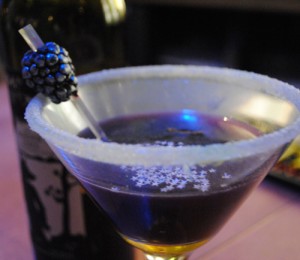 To make 1 cocktail:  Sugar the rim of a martini glass. Squeeze a dime size amount of honey in the bottom of the glass, and pour in ½ oz of Hpnotiq simple syrup*. Throw in a pinch of orange zest, and mix in a shaker. Add 1oz Moon Curser Border Vines wine, ½ oz Absolute Vanilla, ½ oz Bols Blue, 1 oz Cranberry juice, ½ oz Orange juice. Shake the mixture with ice, and pour into glass. Sprinkle with edible sparkles on top, and drop in the blackberry.

*   Hynotiq, sugar and vanilla heated until sugar completely dissolved
** Edible sparkles can be found in the cake decorating section in craft stores

The mountain is spectacular, no question about it. Sun Peaks is an appropriate name – all that sunshine inspires even the least active of us to get outdoors. Though my schedule didn’t allow for much playtime, two activities remain on my to-do list for next year’s festival: snowboarding lesson, and dogsledding.

With its bright mountain peaks, a quaint village of shops, and a burgeoning culinary scene, Sun Peaks Resort is a traveller’s mecca. Add a splash of BC wine country, top it off with an educational wine seminar or two, and you’ve got a wine festival unlike any other.

November | December issue on the stands. Read ...
Read More
For the ninth year in a row Rancho Vignola is setting up its Vancouver Island Harvest Sale here at the Mary Winspear Center in Sidney. Many of ...
Read More
Season’s Greetings EAT readers! We at EAT are looking forward to all the wonderful seasonal baking on offer around the city. One of the great joys ...
Read More
Masterclass Candied Citrus Holiday ...
Read More
We are pleased to welcome the Aura Restaurant at Nita Lake Lodge in Whistler BC, into the curated Storehouse. Aura at Nita Lake offers a unbelievable ...
Read More