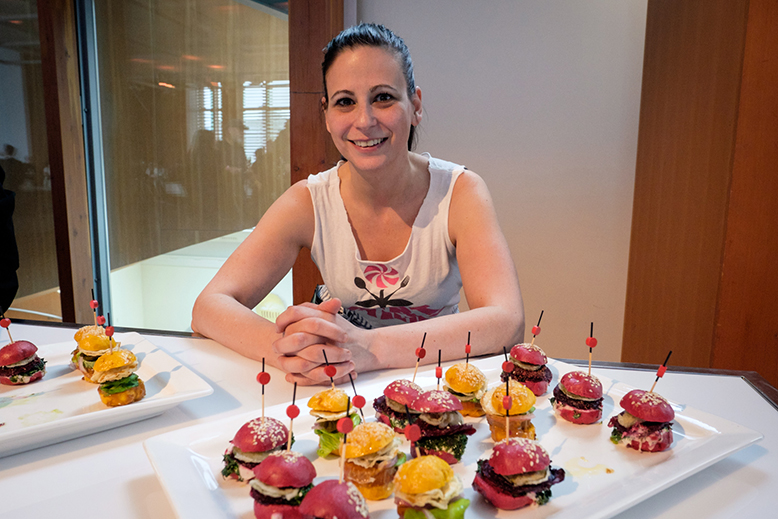 An annual highlight for the hospitality industry, the not-for profit organization has grown from a Southern Ontario-based conference to an international gastronomic event. Not only a rich learning environment for busy industry insiders, it’s a forum that continue to encourage the development of a strong community, attracting headliners including Fergus Henderson, Rene Redzepi, Albert Adria, David Chang, and Dominique Crenn, recently recognized as the World’s 50 Best’s “Best Female Chef.”

This edition saw over 700 chefs, food and beverage experts, and business leaders take over the Art Gallery of Ontario. A fitting venue for the theme of art, culture and technology, the spectacular space provided the room required for the numerous concurrent workshops and curated experiences scheduled.

For some attendees, Terroir is about having access to and learning from influential presenters. Speakers were challenged to present Pecha Kucha-style, sharing their concise story in 20 slides at 20-seconds each.

“Be different” was the message from up-and-comer Edouardo Jordan of Seattle’s Salare. The Food & Wine Best New Chef spoke about his training (The French Laundry, Per Se and Lincoln), being a black chef in fine dining, and the lack of relatable mentors.

Welcoming Mark Best (Marque, Australia) and Quique Dacosta (Spain) to this year’s podium, the renowned chef-restauranteurs shared their stories, a glimpse into the new culinary approaches at their restaurants, which may include finding inspiration beyond physical stimuli. In fact, Dacosta opened minds with how he is able to tap into emotions to create his avant-guard cuisine.

It seemed apropos to have such a progressive thinker at the decade-old forum: never resting on its laurels, Terroir has evolved. Replacing the classroom format, it’s now amphitheaters bursting with social media savvy attendees Instagramming seminar highlights. From “celebrating traditions,” themes actively pursue a “sense of place” and attempt to “pioneer change.”

Others appreciate the networking opportunities at Terroir – valuable connections that have led to collaborations, business opportunities, or influence policy change, like it did in 2015 for direct fisher-to-restaurant sales in Newfoundland and Labrador.

Jam-packed with new ideas and relationships, the day ended as most good parties do, with more food – a collaborative dinner between 16 chefs charged to create their rendition of “the idea of North” that included smoked sturgeon, caviar, and canard roti. At a rural retreat the next day at Ocala Orchards, the celebration continued over a wood-fire pit cooked feast and plenty of cake, and many raised glasses to founder Arlene Stein and her team’s continued work in enhancing the Canadian hospitality industry.

Terroir will return in 2017. Watch their website for details and dates.

—Photos and story by Renée Suen

EAT Magazine is a sponsor of Terroir 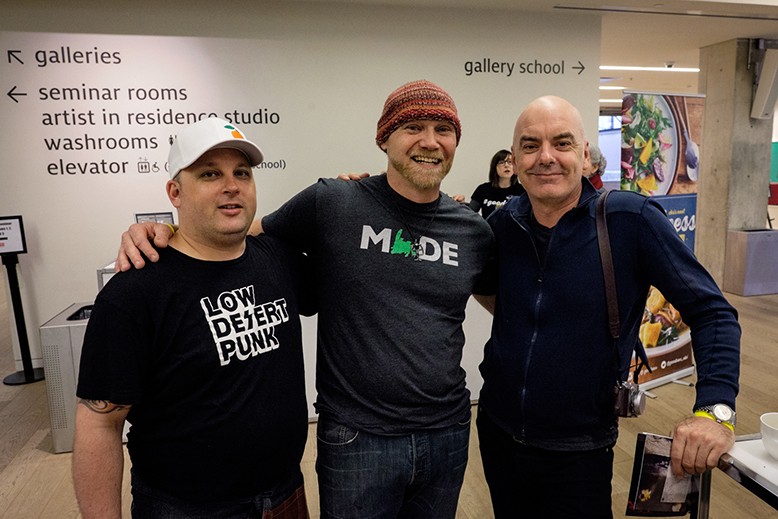 Hans Vogels (Momofuku Noodle Bar) who served a breakfast ramen that kicked off the symposium takes a quick break to chat with Todd Perrin (Mallard Cottage) and Mark Best (Marque). 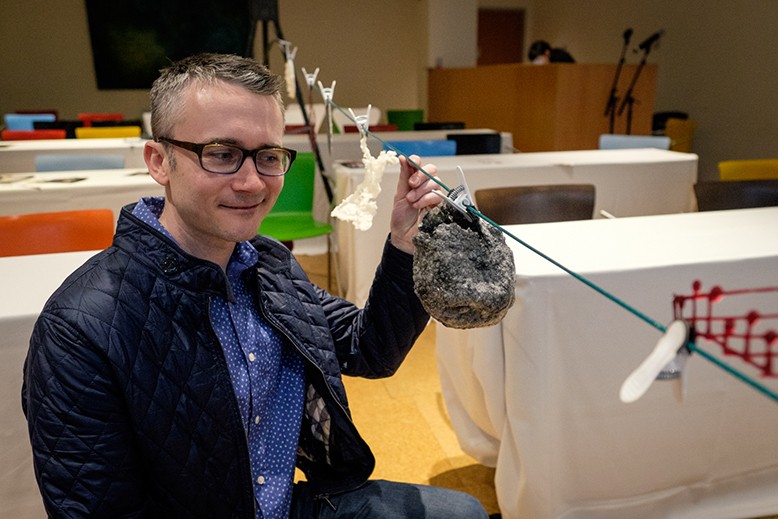 Ottawa chef Marc Lepine eyes one of the edible potato starch creations he made for the palate-to-plate workshop. 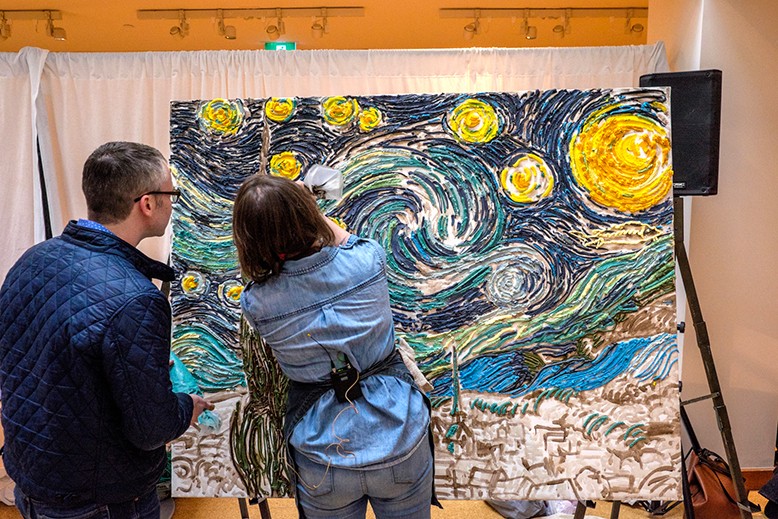 Attendees were also introduced to Christine Flynn, executive chef of Toronto’s iQ Food Co, but known worldwide as the mastermind behind the satirical Instagram account @chefjaqueslamerde. 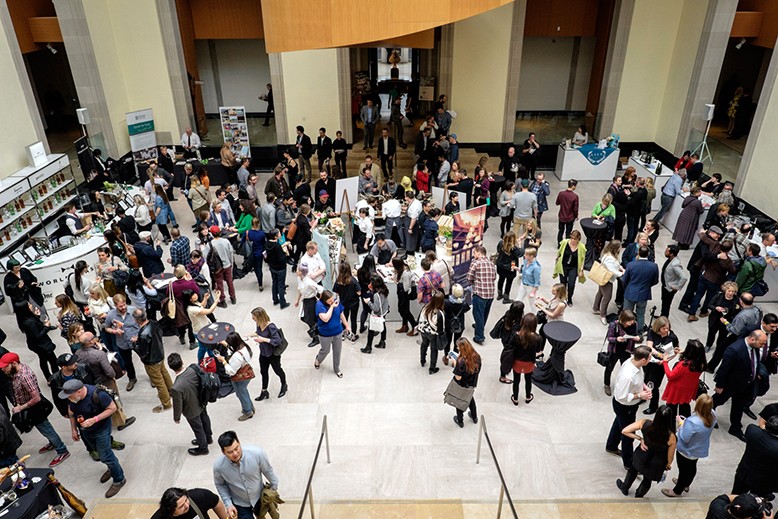 The Art Gallery of Ontario’s Walker Court buzzing with delegates feasting on desserts and cocktails prior to the afternoon sessions. 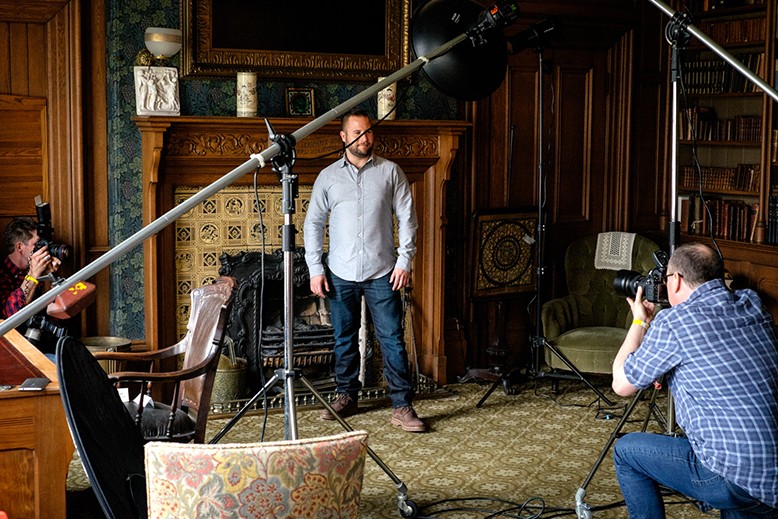 Montreal’s François Chartier, a pioneer in creating recipes through food and wine pairings, surprises audience members with the tip that chocolate pairs well with asparagus. Innovative Spanish chef Quique Dacosta speaks about how he taps into emotions to create his avant-guard cuisine, and how those plates evolve as he similarly evolves. 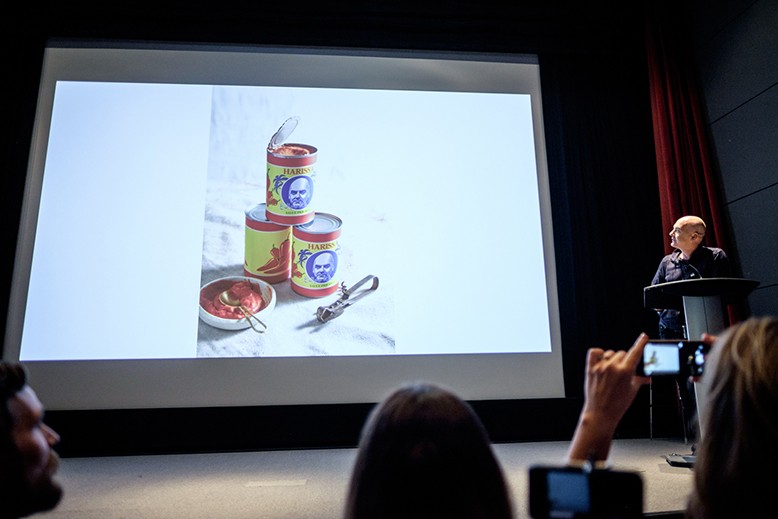 Mark Best of Marque in Sydney, Australia shares a glimpse of images from his new cookbook, Best Kitchen Basics: A Chef’s Companion For Home. 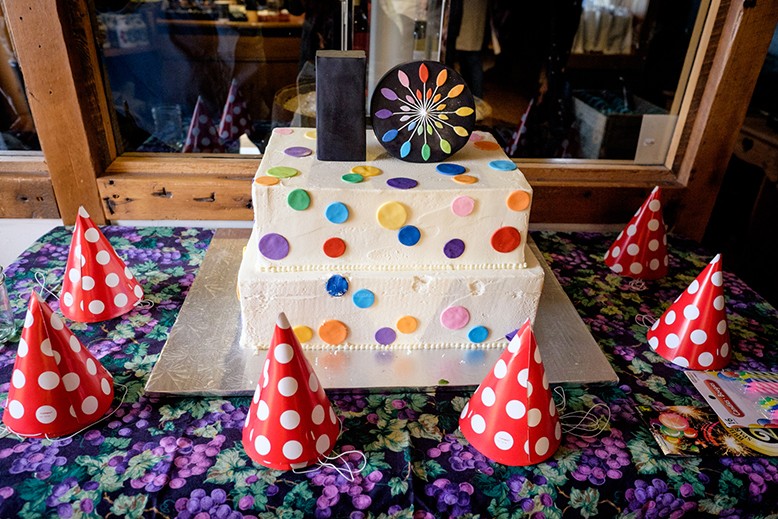 Yummy Stuff Bakery made the two-tiered – white and carrot – birthday cake to celebrate the symposium that founder Arlene Stein dreamt up at the top of her basement staircase back in 2006. Starting with a focus on Southern Ontario, Terroir has grown into a national, and now, international event attracting the likes of Quique Dacosta (modern movement in Denia and Valencia, Spain), Mark Best (Marque in Sydney, Australia), who joins Fergus Henderson, Rene Redzepi, Ben Shewry and David Chang as notable international speakers. 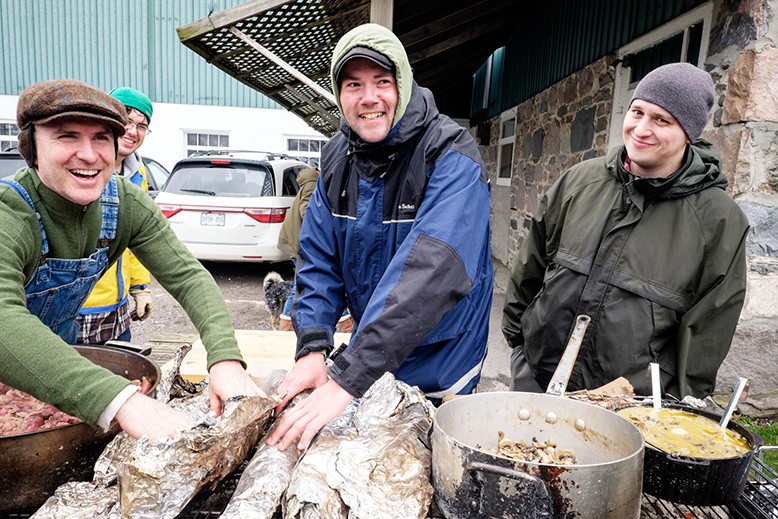 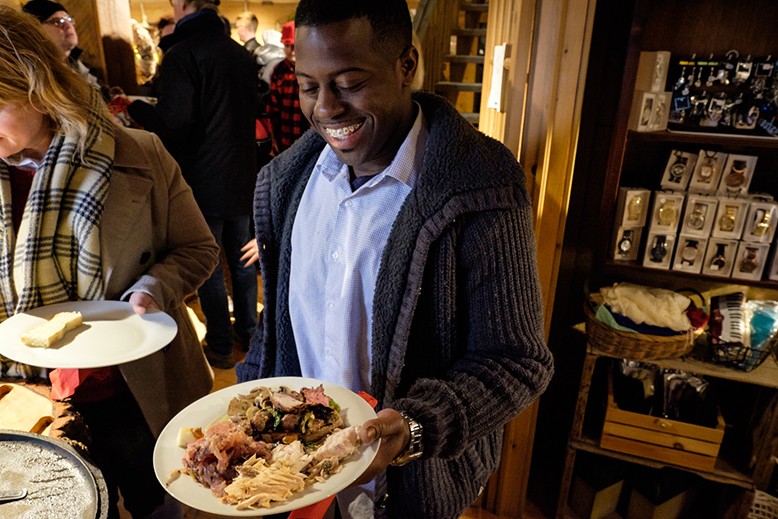 Food & Wine’s Best New Chef, Edouardo Jordan of Seattle’s Salare, shows us how a professional (who trained at The French Laundry, Herbfarm, Per Se and Lincoln) plates his food. 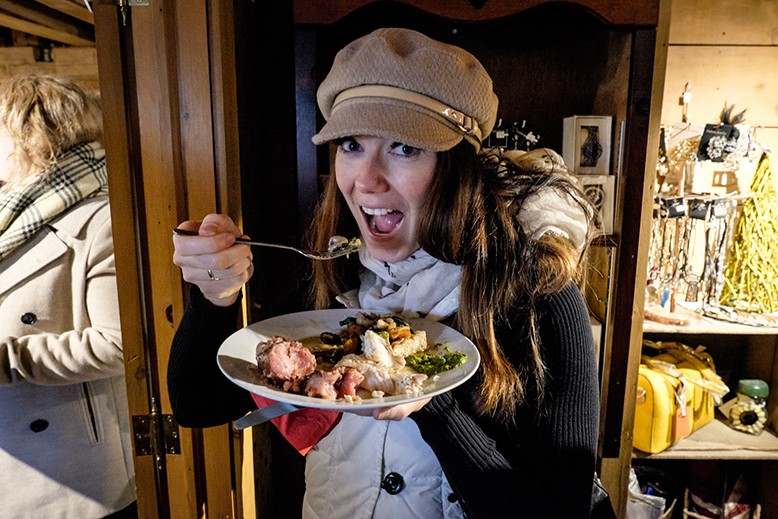 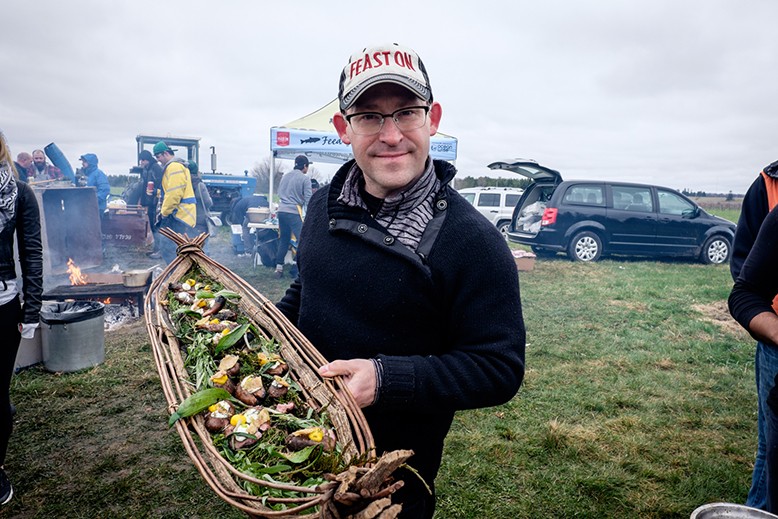 Along with the vegetable platters from Jason Bangerter of Langdon Hall (Cambridge) and Nick Benniger from Nick & Nat’s/Taco Farm (Waterloo), there was grilled whole salmon by Ryan O’Donnell of Mercer Hall in Stratford. 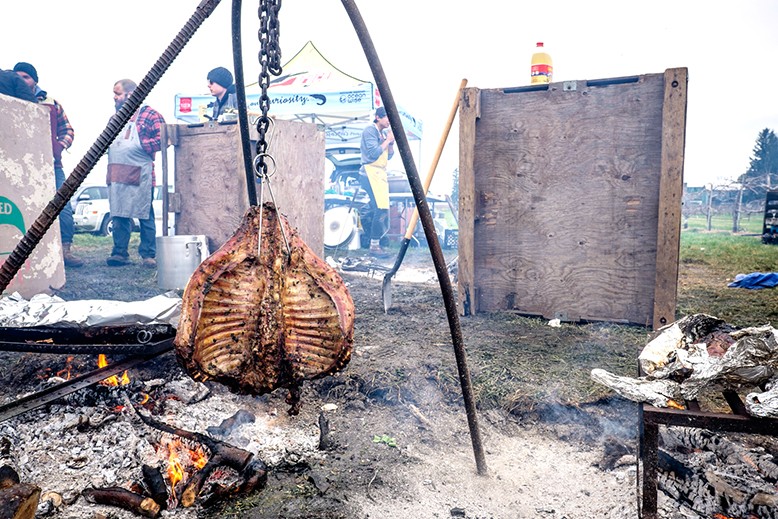 Travis Barron from Northwinds Brewhouse (Collingwood) and Shaun Edmonstone of Bruce Wine Bar (Thornbury) did a scene-stealing roasted lamb – done in pieces, hanging from a tripod set up in Ocala’s orchard. 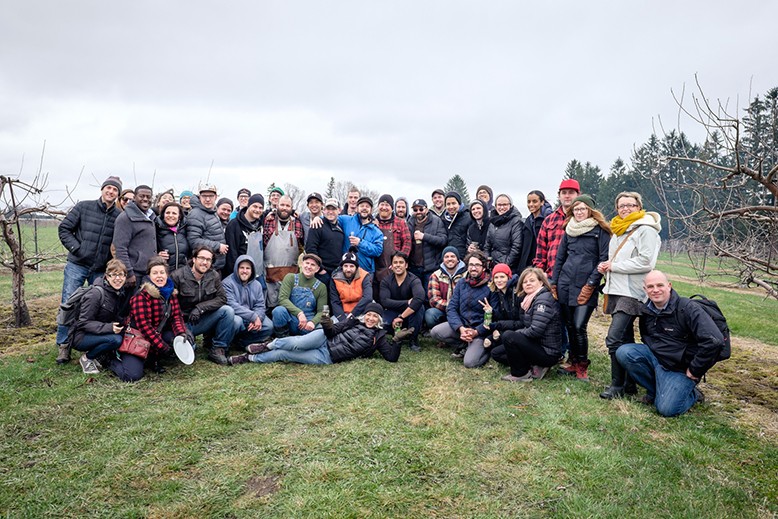 The delegates who braved the chilly weather to hang out by the wood fire pits outside. 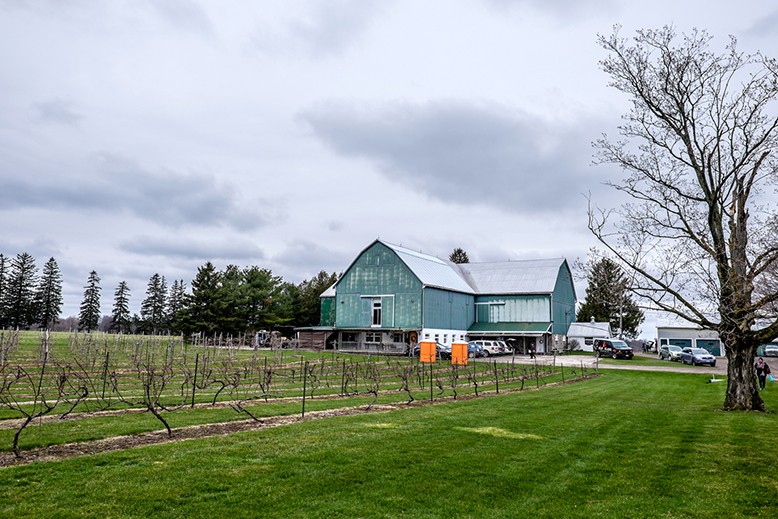 Ontario chefs from Thornbury all the way to Niagara-on-the-Lake cooked up a feast for the hungry crowds, with Port Perry’s Ocala Orchards & Winery acting as the backdrop where presenters mingled and sipped on Sapsucker maple water and Ontario wines and beers. November | December issue on the stands. Read ...
Read More
For the ninth year in a row Rancho Vignola is setting up its Vancouver Island Harvest Sale here at the Mary Winspear Center in Sidney. Many of ...
Read More
Season’s Greetings EAT readers! We at EAT are looking forward to all the wonderful seasonal baking on offer around the city. One of the great joys ...
Read More
Masterclass Candied Citrus Holiday ...
Read More
Even though the weather of late would seem otherwise, it is still winter. Apples are one of the few local fruits that are available through February ...
Read More