If you’ve ever had Thai food, or made a Vietnamese or Cambodian recipe, you are probably familiar with fish sauce. Its English name is somewhat frank, and doesn’t exactly conjure up a delicious image. But Fish Sauce adds a hallmark flavour to many dishes and enjoys a similar mainstay status in Southeast Asian cuisine, just as salt and pepper do in the west. Not unlike soy sauce in Chinese food, fish sauce lends a savoury taste to soups, meat dishes, noodles and curries.

Simply put, fish sauce is the liquid collected from fish––usually anchovies––that have been left to ferment in salted water for 8 months to 2 years. Fish sauce may also be derived from dried fish, shellfish, or by-catch (an assortment of whatever is brought up from the nets that is unwanted). Though mainly used in Thai, Cambodian, Vietnamese, and Filipino cuisine, it is also used (sometimes with slightly different ingredients) in Japanese, Chinese, and Korean food as well. 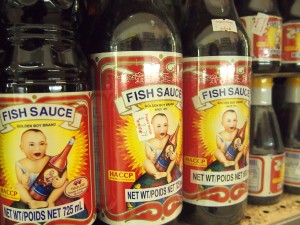 Like the specialty salts we love in the West, fish sauce also comes in many varieties and quality grades. Generally speaking, the longer the sauce has been aged, the finer the quality will be, and the less ‘fishy’ it will smell and taste. The ingredients in the premium brands are simple: water, anchovy extract, salt, and sugar. Cheaper fish sauces can contain additives such as MSG and other flavour enhancers, so check the ingredients before buying. At less than five dollars a bottle for a premium aged fish sauce, it is certainly worth going for the better brands.

Fish sauce is available at many grocery stores, although the selection will be broader in Chinatown. Fisgard Market has a decent selection in the rear right corner of the store; look for Three Crabs, Squid Brand, or Golden Boy (pictured).

With Phase 2 beginning, restaurants and patios, tasting rooms and coffee shops are reopening. This is an ongoing process, with many changes, so we ...
Read More
“Michael Williams’ legacy of art and philanthropy gives Swans an atmosphere of deep, resonant tradition.” Swans Hotel and Brewpub has ...
Read More