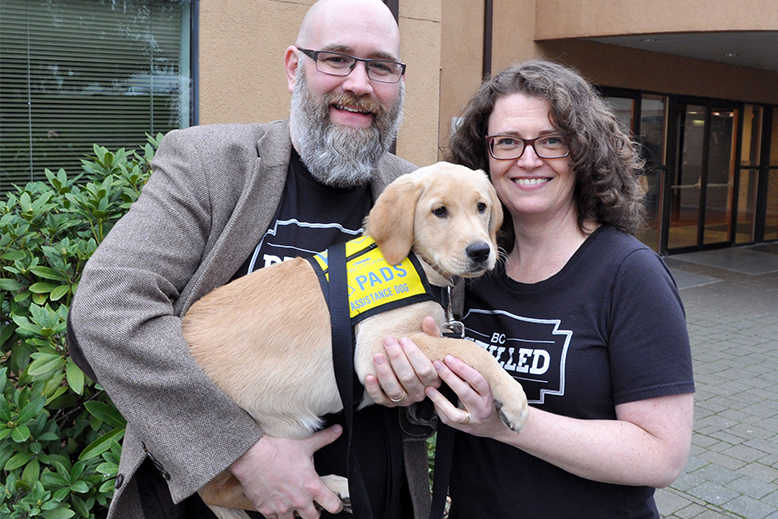 The fourth annual main tasting festival will take place on Saturday, April 8, 2017 at the Croatian Cultural Centre in Vancouver. 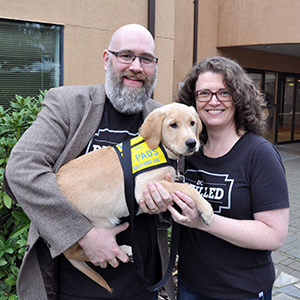 Alex Hamer and his wife Katherine, with a PADS puppy.

EAT: Give us a brief origin story for BC Distilled.

Alex Hamer: We all have ideas along the lines of ‘wouldn’t it be great if someone did X …’. Mine was a distillery festival focused solely on local spirits. I saw the signs that the industry was about to explode, and I thought that instead of just wishing someone would create this kind of event, I would do it myself. I wanted a break from working in an office in IT, and this seemed like a pretty good left turn to my career!

EAT: What do you look for in a good spirit?

AH: I love products that take something traditional and apply a different technique or modify ingredients to push the boundaries: a different botanical in a gin, or barrel aging a product that is usually served unaged.

EAT: What are some of the most interesting spirits being offered this year?

Long Table Distillery is releasing a 5 Year VSOP Reserve Pear Brandy made in collaboration with Deep Cove Brewery and Distillery. I haven’t tried this product yet but I’m happy to see a collaboration between two local distilleries.

Odd Society Spirits recently released their Mia Amata Amaro (a bittersweet Italian liquor), and this will be its first year at the show. It’s an excellent product and joins a few other BC Amaros, including one from North Vancouver’s Woods Spirit Co, which attracted a lot of attention last year, and probably will again this year.

EAT: How has the spirit industry grown since BC Distilled made its debut.

AH: In 2013 when I first starting thinking about BC Distilled, there were about a dozen distilleries. By the time I ran the first event in2014 I had 16 out of 20 distilleries in the province participating. This year, even in the time that I’ve started planning the festival, at least two new distilleries have opened, making 41 operating in the province (34 of which are in this year’s festival).

EAT: What does British Columbia have to offer the rest of the world in terms of leading the way in innovation and quality?

AH: One of the great things about BC and the west coast in general is that we aren’t bound by centuries-old traditions around spirit-making. This means that distillers are more willing to experiment, and just as importantly consumers are eager to try those new and non-traditional products. This is how we get things like a whisky aged in a maple barrel, a gin which uses seaweed as one of its botanicals, or an amaretto aged in a barrel that used to hold gin.

EAT: What does the future hold for the BC spirit landscape?

AH: The industry will definitely continue to grow. I wouldn’t be surprised to see 20-30 more distilleries open in the next five years.

We’ll also start to see more whisky on the market (most distilleries in the province aren’t even three years old – the minimum a spirit must be aged to be called whisky). And the overall quality of the spirits continue to improve as competition demands it, and as our distillers gain more experience.

EAT: What is the single most important issue facing the BC spirit industry?

AH: Distillers may tell you something else, but I believe that market awareness and education is the biggest challenge. Ask any distiller how many people walk in on a Saturday and ask what kind of beer they make – it won’t be an insignificant number. And the fact that you can get a locally made gin is still a surprise to most people I meet.

EAT: Ultimately, what is the goal of BC Distilled

AH: BC Distilled’s goal is to celebrate and highlight BC’s distilleries. It fits nicely with what I see as the biggest issue facing the industry!

EAT: What’s the best food to pair with spirits?

AH: That really depends on what the spirit is. Whisky is great with chocolate (or even the right cheese!). With cocktails you can create something to pair with almost any food.

EAT: What are you eating for dinner?

To purchase tickets to BC Distilled visit their tickets page

For the ninth year in a row Rancho Vignola is setting up its Vancouver Island Harvest Sale here at the Mary Winspear Center in Sidney. Many of ...
Read More
Season’s Greetings EAT readers! We at EAT are looking forward to all the wonderful seasonal baking on offer around the city. One of the great joys ...
Read More
Masterclass Candied Citrus Holiday ...
Read More
November | December issue on the stands. Read ...
Read More
Press Release — Sheringham Distillery win’s Canada’s Best Contemporary Gin Award at World Gin Awards in London, UK (February 1, 2019) ...
Read More