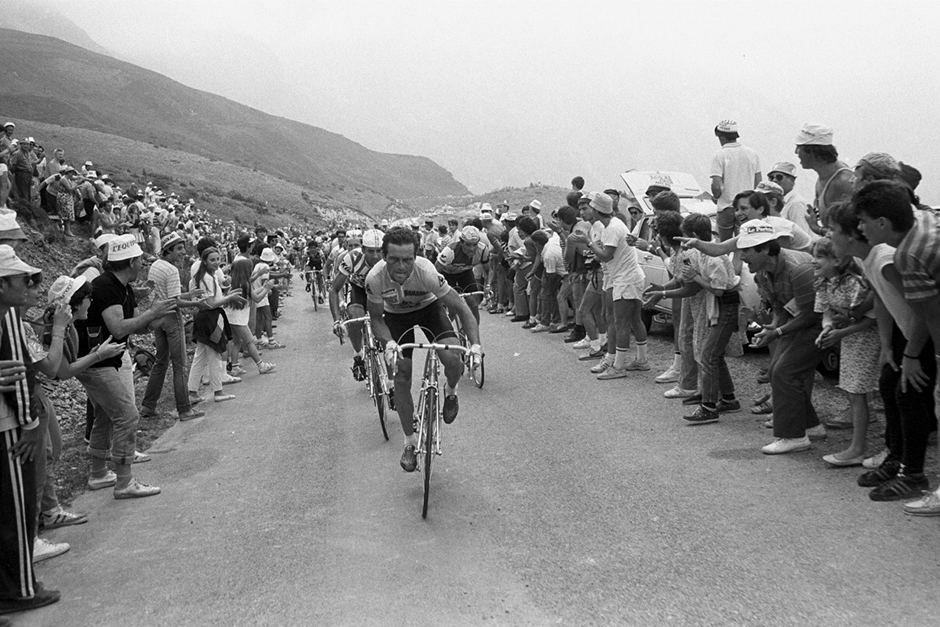 I love July. Or, better yet, j’aime Juillet.

It’s also a reason to break out Kraftwerk – Tour de France. Something else that I love about July.

While the wine country part might be obvious (Champagne is in France for the win), the Tour de France might not rank high in your must-PVR plans (broadcast here on Sportsnet One, fyi). Le Tour is a historic feat of endurance, the most legendary of bike races and the ultimate human-powered trek. The 198 men riding in Le Tour face an epic journey: broken bones, road rash, scaling mountains, extreme heat, fans that exemplify fanatical, and cobblestone from hell. 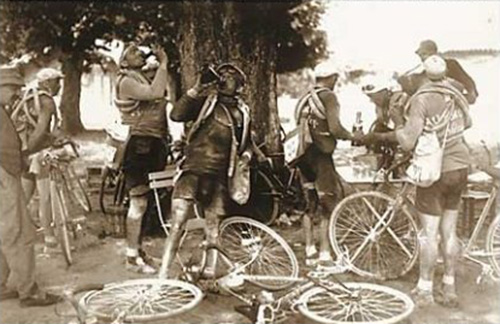 My kind of sport

This year’s 101st TdF runs from Saturday July 5th to Sunday July 27th, is made up of 21 stages (days) and will cover a total distance of 3,664 kilometres. 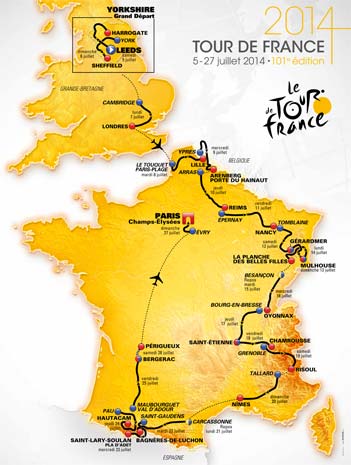 That’s worthy of a good drink, and these boys are definitely deserving of a daily cheers. I will be following le Tour’s route across France with a daily DRINK, sharing what I imagine the riders sipping at the end of each day on the road. Show your support and drink along with the peloton!

*It was officially announced earlier this week that EAT’s friend and hometown hero, Victoria-born Ryder Hesjedal, will not be riding in this year’s Tour de France after his very busy racing season so far. We like to picture him DRINKing Along with le Tour too.

Friday, July 4. Eve of le Tour.
The final preparations are finished today in Leeds, England, the site of tomorrow’s Stage 1 start and the first time le Tour has been in this city. Though the vast majority of le Tour is in France, from time to time riders blur the borders of the country for a stage or two. This is the fourth Tour de France to contain stages in England after the 1974, 1994 and 2007 editions.

Saturday, July 5. Stage 1.
Le tour ends the first day in Harrogate, home to Taylors of Harrogate – a family owned tea specialist since 1886 and purveyors of the ubiquitous Yorkshire Tea.
*Of course, it’s hard to think about a stopover in Yorkshire without Yorkshire Pudding. Though the exact origin of the Yorkshire pudding is, as yet, unknown, it is assumed it was developed in the Yorkshire county. The 1st recorded published recipe dates back to 1737.

Sunday, July 6. Stage 2.
Today’s tour rides through Yorkshire, from York to Sheffield. The county is one of the top (and most dense) in the world for beer, with 131 different breweries – including Samuel Smith, of Tadcaster, established in 1758.
*When today’s riders finish in Sheffield, they might be in for a sweet treat. Liquorice Allsorts began here around 1900.

Monday, July 7. Stage 3.
When the riders finish their last English stage today  in Londres, they should be celebrating with a flute of English sparkling. High quality English sparkling from chardonnay, pinot noir and pinot meunier is produced across southern England, and many say the wines have the potential to match Champagne. The soils match at least; a line of  chalky limestone soils stretches up from Sancerre and Chablis, through Champagne and across the Channel to England, past Dover and across southern England.

Tuesday, July 8. Stage 4.
The riders begin the French part of le Tour today, though the north of the country, and finishing outside of the most Flemish of French cities, Lille. All through the region they’ll find numerous Bière de Garde (beer for keeping) – a strong pale ale traditional in this Nord-Pas-de-Calais region. These beers were originally brewed in farmhouses during the cool winter and early spring to avoid unpredictable problems with the yeast during the warmer months. Well known beers of this kind include Brasserie de Saint-Sylvestre, Trois Monts, Brasseurs Duyck, Jenlain, Brasserie Castelain, Ch’Ti Blonde/Ambrée and Brasserie La Choulette, Ambrée.The most iconic and traditional food of the Nord-Pas de Calais region of Northern France is moules-frites – a perfect foil to a satisfying Bière de Garde.

Wednesday, July 9. Stage 5.
A big stage today, as the riders face the legendary and dangerous cobbles of Roubaix. They’ll need a stiff DRINK for courage, or to numb the pain at the end of the day. Fortunately they’re riding through Hainaut Province, where locals have adopted the Belgian tradition of pèkèt. Pèkèt is a genever style gin, a juniper flavored spirit crafted by the blending of neutral alcohol and moutwijn or malt wine (grain mash), and infused with herbs, flowers, or fruits. There are several different flavours, mostly based on berries and citrus, but also herbs, spices and vegetables.

Thursday, July 10. Stage 6.
When the tour rolls into Reims today, the men will be riding over a maze of 120km of caves and tunnels under the ground, cellaring millions of bottles of Champagne. Reims is one of the main centres of Champagne production, and many of the large and illustrious Champagne houses, les grandes marques, have their headquarters here.

Friday, July 11. Stage 7.
The riders continue through the Champagne region today, launching from the historic city of Épernay. It is a major business and trading centre for Champagne, and many famous Champagne houses are headquartered here along the famous Avenue de Champagne. The buildings are sitting atop over 100km of cellars carved out of the chalk on which the town is built.

Saturday, July 12. Stage 8.
As le Tour heads into the Vosges mountains today, they will be riding past many mirabelle plum orchards. The mirabelle is identified by its small, oval shape, smooth-textured flesh and characteristic flecked yellow colour. These sweet & flavourful fruits are used in local brandies and eaux-de-vies.

Sunday, July 13. Stage 9.
Le Tour heads through the Haut-Rhin today, home to Alsace’s famous vineyards. They race through the village of Turckheim, one of the most significant wine villages in Alsace, site of Grand Cru Brand, and home to the iconic and legendary Zind-Humbrecht.

Monday, July 14. Stage 10.
As riders continue to climb along the Alsatian Wine Route through the Vosges Mountains today, they pass by Colmar, the capitale des vins d’Alsace (capital of Alsatian wine). Since 1947, Colmar has been host to the Foire aux vins d’Alsace (Alsacian wine fair), the largest festival in Alsace. The riders also pass through Munster, where the strong, soft cheese of the same name originated and dates back to the 14th century.

Wednesday, July 16. Stage 11.
After a well deserved rest day, the riders pick up again today, finishing in the town of Oyonnax, in the Savoie wine region, east of the Maconnais. Oyonnaxiens have long been making the pink sparkling wine known as Cerdon – a method ancestrale bubbly generally made from  gamay & poulsard.

Thursday, July 17. Stage 12.
The riders will be eating well before the start of today’s leg. Stage 12 begins in Bourg-en-Bresse, where the famous AOC Bresse chicken are from (as well as the coveted Canadian-bred variety, the Blue-footed Bresse). Riding down through the gastronomic city of Lyon, they can easily and often slake their thirst with the wines of Beaujolais (directly north) or the Côtes du Rhône (directly south).

Friday, July 18. Stage 13.
Today riders race in the Rhone-Alpes region and through the department of Isère. It is here that Chartreuse was a first developed,  made by the Carthusian Monks since 1737 according to the instructions set out in the secret manuscript given to them by François Annibal d’Estrées in 1605. The liqueur is composed of distilled alcohol aged with 130 herbs, plants and flowers, and named after the Monks’ Grande Chartreuse monastery, located in the Chartreuse Mountains in the general region of Grenoble in France. The liqueur is produced in their distillery in the nearby town of Voiron (Isère).

Saturday, July 19. Stage 14.
At the start of today’s stage, expect the fans to be nuts. Walnuts, actually. Grenoble is known for its walnuts, Noix de Grenoble, which are protected under Appellation d’Origine Contrôlée (AOC) just like wine.  To qualify for AOC status, the walnut must be one of three varieties: the franquette, the mayette or the parisienne. Of course, the resourceful French have used these abundant nuts to make Liqueur de Noix de Grenoble, a potent, brown sipper.

Sunday, July 20. Stage 15.
The race finishes today’s stage Nîmes, within the AOC of in Costières de Nîmes. Formerly part of the Languedoc wine region, the appellation was moved into the Rhône wine region in 2004 as their wines are more characteristically Rhône than of the Languedoc region to which the area geographically belongs.The Costières de Nîmes produce mostly red wines, from Syrah, Mourvèdre, Grenache, Carignan and Cinsault.

Tuesday, July 22. Stage 16.
It’s impossible to think of Carcassonne, the start of today’s stage, without thinking of Cassoulet. This region is the traditional homeland of the rich, slow-cooked casserole. Each town is slightly different; In Carcassonne, they make a version with white beans (haricots blancs or lingots), duck, partridge or goose confit, sausages and mutton. The perfect match for such a hearty dish are the full, spicy and positively rustic wines of the area, including the AOC’s of Minervois, Cabardès, Corbières, Fitou and Malepère.

Wednesday, July 23. Stage 17.
As the riders climb through the Midi-Pyrenees in south-west France, they ride through the Fronton AOC. This ancient wine producing region was first planted by the Romans.  Nearly 85% of the AOC’s  wines are red, made primarily of the Fronton’s exclusive grape variety négrette (minimum 50% in the blend).

Thursday, July 24. Stage 18.
Before the start of today’s stage in Pau, the riders may have steeled their nerves with a glass of gutsy wines from Madiran AOC. These potent and concentrated reds are made up of 40-100% tannat, which can be supplemented by cabernet franc (locally also called bouchy), cabernet sauvignon and fer.

Friday, July 25. Stage 19.
Today’s stage ended in the town of Bergerac, and the seat of South West France’s Bergerac wine region. Just east of Bordeaux, the wines of this region share grapes with Bordeaux, but are also sometimes supplemented with côt, fer servadou and mérille red grapes, and sauvignon gris, muscadelle, ugni blanc, ondenc and chenin blanc for whites.

Saturday, July 26. Stage 20.
As the riders continue through the Bergerac wine region, they may come across the sweet wines of AOC Monbazillac. These sweet white wines are made from sémillon, sauvignon blanc and muscadelle grapes that are affected by  noble rot (Botrytis cinerea). 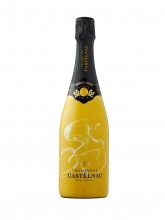 Sunday, July 27. Stage 21.
Le Tour est finis! It’s traditional that the lead riders and team toast with Champagne as they enter their ‘victory laps’ around the Champs-Elysees in Paris. Champagne de Castelnau is the official Champagne of the ASO, the organizers of the race, so I assume the riders were treated to this house’s bubble in their glasses. Castelnau introduced a limited edition Champagne and stunning, yellow-jersey inspired packaging especially for this 101st edition of Le Tour.

If there’s ever a wine you want to get for your blind tasting, NZ Sauvignon Blanc is it. Sauv Blanc from New Zealand has a very distinct and ...
Read More