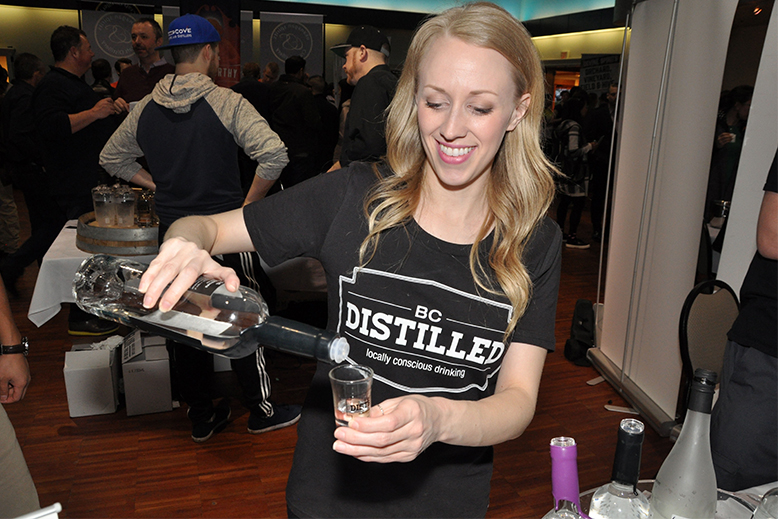 The local spirits industry is growing and if the showing at BC Distilled on Saturday is any indication, it’s growing in the right direction. Twenty-seven local distilleries gathered at the Croatian Cultural Centre to showcase their wares to the trade and public for the third year running. Producers from all over BC were sharing traditional spirits, liqueurs, bitters, and mixers. Spirits included everything from vodka to single malt whiskey with a lot of gin in between. Did I mention the gin? The spirit, a natural choice for new distilleries was the unofficial focus of the show. Whiskey needs three years in barrel before it can be officially labeled as such, so gin allows new distilleries to get a spirit on the market quickly to generate cash flow. Gin can capture the attention of bartenders and show off the personality of the distillery while they wait for the whiskies to mature.

Some such as Dubh Glas (Oliver), Sherhingham (Shirley), and Legend (Naramata) distilleries are using traditional barley and wheat for their gins, but many are crafting their gins with other, less traditional bases. Victoria Distillers (Sidney) use corn for their gins, while Unruly (Courtenay) use honey, Okanagan Crush Pad (Summerland) and Devine Spirits (Saanichton) use grapes from their vineyards for their spirits. Pemberton Distillery (Pemberton) use potato for their Schramm Gin and Merridale (Cobble Hill) use fruits such as apples and pears for theirs.

Beyond base spirits, distilleries put their stamp on their gins with their choice of aromatics. All use juniper (a requirement for gin) but beyond that, the options are limitless. There are distilleries focusing on local botanicals while others, such as Okanagan Crush Pad look south to focus on citrus. Matt Dumayne, the winemaker and distiller at OCP uses five different organic citruses for his Narrative Gin and dried citrus and fennel as the focus for Bolly Water, a gin crafted specifically for Jay Jones at Vij’s Restaurant. The resulting spirits are refreshing rather than bracing. The finesse of these spirits reflect Dumaynes’ winemaking style, and indeed when I asked him what inspired the expansion to hard liquor, he told me that they had wanted to make a port style wine at the Crush Pad and after some research decided to make their own spirit for fortifying. On the opposite end of the spectrum was Dubh Glas’ Noteworty Gin, with decidedly floral nose and smooth, rich, mouthfeel. Grant Stevely, the distiller uses judicious amounts of lavender and rose to distill a gin he claims stands out in the classic Negroni.

Other highlights (other than the puppies making googly eyes at everyone on behalf of the Pacific Assistance Dogs Society, the fundraising partner for BC Distilled) were the ultra clean honey-based vodka from Unruly, the pear brandy from Merridale, the oak-aged gin from Victoria Distillers – imagine gin with caramel notes, and the single malt whiskey – one of the few in the room – from Okanagan Spirits. The coffee liqueur from Legend Distillery made with cold brew coffee and lightly sweetened was a refined alternative to Kahlua and the Chili Vodka from Sons of Vancouver was no joke. James Lester and Richard Klaus were serving it mixed in caesars made with BC’s own Walter’s Caesar Mix or with grapefruit for a sweet and spicy cocktail. Either way, not for the faint of heart.

On my way out of the showroom, I grabbed a Cartem’s donut to sooth my palate and stopped by the Pop-Up Liquor store to pick up a bottle of gin for my home bar.

– Written by Lisa Haley. Lisa is a sommelier and the wine director at L’Abattoir in Vancouver.

For the ninth year in a row Rancho Vignola is setting up its Vancouver Island Harvest Sale here at the Mary Winspear Center in Sidney. Many of ...
Read More
Season’s Greetings EAT readers! We at EAT are looking forward to all the wonderful seasonal baking on offer around the city. One of the great joys ...
Read More
Masterclass Candied Citrus Holiday ...
Read More
November | December issue on the stands. Read ...
Read More
Like many of my West Coast comrades, I have ventured quite sparingly across Canada’s eastern side. The weather has never seemed that agreeable, and ...
Read More