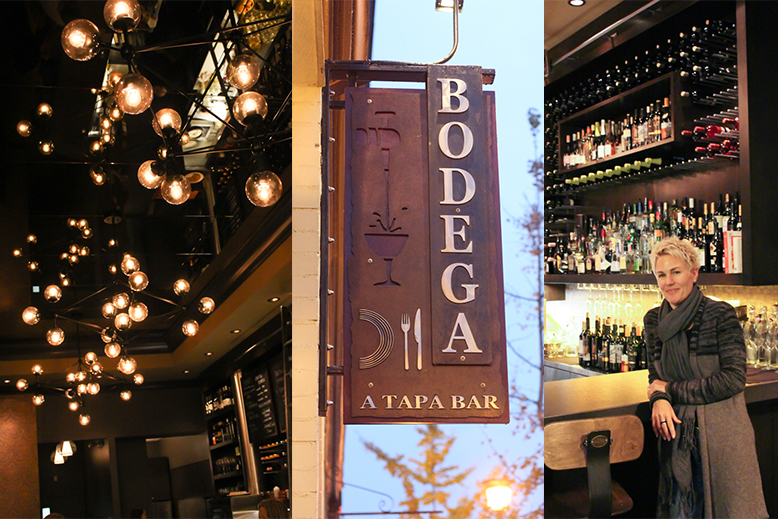 With new restaurants popping up around town on an almost weekly basis, deciding where to feed your hunger has become an increasingly difficult decision. While food takes top priority, design and atmosphere rate near the top. So who’s behind the design of Victoria’s top restaurants?

Sandy Nygaard has been designing spaces like the Strathcona Hotel and Ross Bay Pub for the past 15 years. Most recently she completed the design of Bodega, the sister establishment to the Tapa Bar, both residing in Trounce Alley.

We met for a few glasses of mugu blanco wine and a smattering of Bodega’s Spanish tapas. Sandy doesn’t do bleu (cheese that is) and maintains a primarily vegetarian diet (although some exceptions were made for chorizo and chickpea stew). Bodega, I learn, is Sandy’s first restaurant that doesn’t include televisions in its design, and where all cooking happens at the bar (the space was much too small for a kitchen).

Between sips of wine, I snuck in a few serious, hard-hitting questions.

Kaitlyn: If I could wind the clock back a few years, was restaurant design your original career goal? It seems like such a no-brainer in 2014, but I wonder if design was always this coveted?

Sandy: I didn’t plan on doing this at all. I was a printmaking artist and that’s all I was doing. And then a whole chain of events occurred for me to end up here — really, I just needed to do something for a living. That evolved to charging clients and gaining word of mouth. Pounding the streets to get a job essentially. That was 23 years ago.

You can get yellow sheets [building permits] at the government. I would get those and phone everybody. I’d ask if they wanted a colour consultation. We called these blue toilet jobs, because one of the jobs I worked on was a lady renovating her bathroom. It was blue. Blue tub, blue sink, blue toilet. I wanted to gut it, but she had ordered extra toilet seats in case one cracked. She gave me a toilet seat to take back to the office to match it to things. You don’t say no at the beginning. Then, all of a sudden you’re designing restaurants.

K: How much do clients impact the final design?

S: Whoever is going to create a restaurant already has a vision — it’s their passion. You have to have a passion to open a restaurant or you’re crazy. They already have a sense of the space in their head that represents the food.

I’ve designed restaurants where they don’t even have a menu yet, and don’t really know what they’re doing. But even those owners will have an idea of the clientele they want, even if the food isn’t designed. Often they’re just looking for a hip place and we’re going to serve all types of food. From that, it’s easy to find a way.

But how do I know what to do? For instance, with Bodega, they definitely had an idea: authentic Spanish tapas. The space was super small, so it was about making the room the bar, and bodega is Spanish for bar, hence the name. The idea was to create something that was smoky without being smoky. I kept saying I wanted it to look like a sepia photograph. Everything we picked had that sense of a sepia photograph.

K: So you’re basing your designs on feelings and specific moments in time. Does location ever play a factor?

S: The function has to come first. The space planning and layout of the restaurant is just a fact. You need X amount of tables. The bar has to function. A certain amount of washrooms. Wheelchair accessibility. The list goes on. That really drives the design.

Then it’s decisions like curved booths or tables, Casual seating or tables in a line. You just start playing. So say you want to open a restaurant serving spicy food, not just Mexican, but global flavours. So you want spicy, bright colours. Then you do a bit of Google search—god bless that machine— and flavours start happening. It’s a building process.

Food and design are a holistic experience. It’s something we should enjoy, but we’re also groomed to enjoy it. All aspects of the senses are being treated. Restaurants that are downplaying the visual experience are actually quite conscious of that. That’s their shtick.

I think of Part and Parcel. Fantastic spot. It reminds me of a big city deli, white subway tiles and bright lights. It’s not warm and toasty, more wholesome and hearty. Although it may look like a simple design, it was simple by choice. Even when you think someone isn’t paying attention, they actually are. Incredible cooking. Clever! There’s an example of food driving design.

K: Okay, one last question… What spots in town give you design envy?