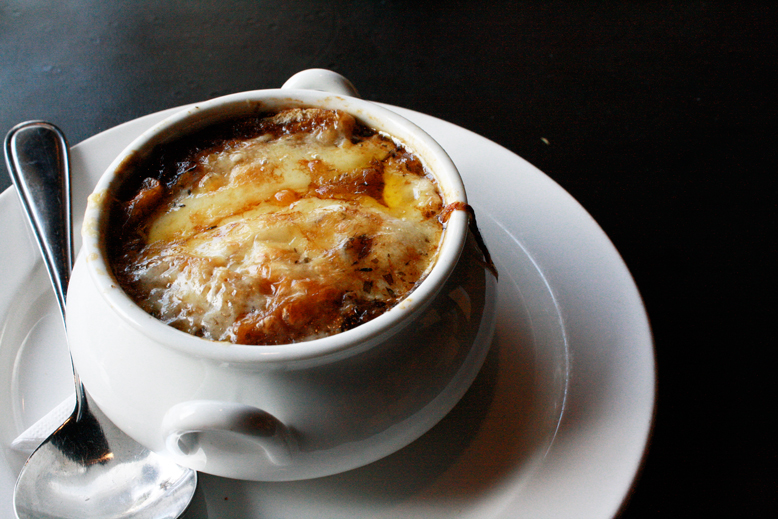 It is the simple foods that often taste the best. The ingredients have to stand on their own, and complement each other without muddying the flavours. French onion soup is one of the classic examples of simple food done well, and we know this because it has stood the test of time and continues to be a staple on menus around Victoria.

As it appears on the menu, onion soup, it would be easy to gloss over this dish and land on one of the more “special” items on the menu. The key to a great French onion soup is the time a chef takes, as Julia Child herself said in Mastering the Art of French Cooking, “…to develop the deep rich flavour which characterizes a perfect brew”. At 10 Acres, they create the perfect brew, the essential foundation, by cooking their stock for 10 hours. By doing that, you know they aren’t kidding around with this simple soup.

There’s something about seeing Soupe a l’Oignon Gratinée on Brasserie L’école’s menu that immediately makes you think, “This is going to be good”. Maybe it’s because that’s what the French themselves call it, or maybe it’s because the next word on the menu is bacon. Bacon isn’t typically used in French onion soup, but let’s face it, adding bacon to any recipe never makes it taste worse. 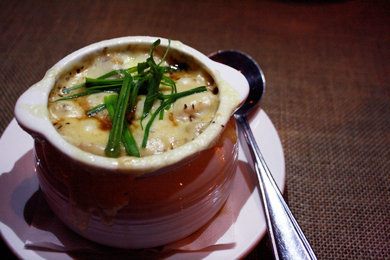 Simple dishes lend themselves easily to minor alterations. Like Brasserie L’école, The Village stays true to the traditional components of the soup. There is still a rich, onion-y broth, and cheese (they use gruyere like Brasserie, and 10 Acres), but instead of a traditional baguette or French bread crouton, The Village incorporates multiple smaller rye bread croutons. For traditionalists, this might be too much, but what is nice about the use of rye is that it compliments the broth and onions without overpowering them.

French Onion Soup on a bistro menu just seems right, and the Heron Rock Bistro’s version fits perfectly on the menu with other bistro favourites like the Croque Madame. Like the other great Victoria French onion soups, Heron Rock stays true to the classic recipe; the broth incorporates caramelized onions along with beef broth, thyme, and fennel seed, and there is the perfect balance between melted cheese, crouton, and soup. 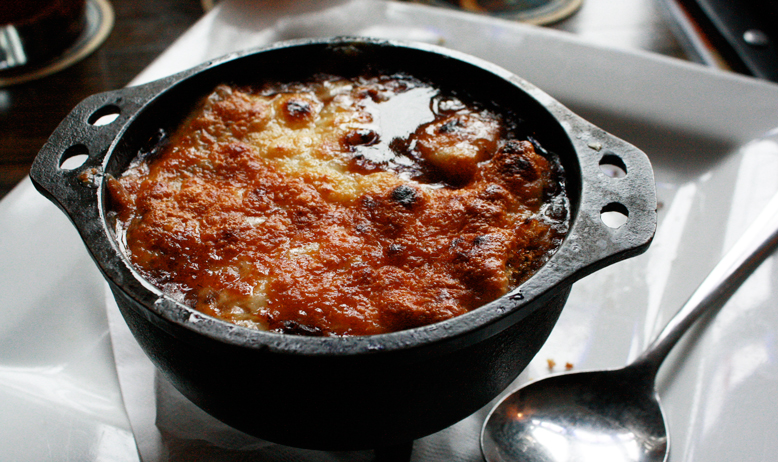 Often one of the best places to get French onion soup is at a pub. When you think of pub food, it is typically comforting and basic. Four Mile Pub’s French onion is abundant in soft, sweet onions, broth, and, one of my favourite parts, cheese that almost has a crispy texture in contrast to the soft bread and broth. While the soup in almost every aspect is a perfect interpretation of the traditional, the inclusion of Edam cheese instead of gruyere or Swiss makes it unique to Four Mile.

Megan has written in EAT’s print magazine (here), as well as many other publications

With Phase 2 beginning, restaurants and patios, tasting rooms and coffee shops are reopening. This is an ongoing process, with many changes, so we ...
Read More
photo credit: Rebecca Baugniet Dayle Cosway of Terralicious Gardening and Cooking School offers this fall recipe, saying “zucchini are so easy to ...
Read More