“To market, to market, to buy…wow that basil is gorgeous! Hey, strawberries have arrived! Listen to those cute kids playing the fiddles… what a well-behaved dog! Wait, where’s my daughter… do I smell mini-donuts? What was it I came here for again?”

Oh, the joyous sensory experience of sunny summer Saturdays at the local community market. There’s so much to see, taste, smell, buy – it’s hard to know where to start – and harder to know when to stop. Sure, you’re bound to leave with things you didn’t set out to find, but isn’t that half the fun? Farmers’ Market purchases are guilt-free impulse buying at its best. Even if you don’t “need” that bag of beautiful handmade cheddar-thyme crackers or the rest-inducing aromatherapy inhaler, you’re feeding the local economy and supporting your neighbours while you’re at it. And it’s one less thing you bought that had to travel thousands of kilometres to get here, so you’re also spared the preservatives. If you ask me, that’s reason enough. That’s why just about every Saturday I grab my shopping bag and my tips from the previous night’s serving shift, and let myself get delightfully distracted.

But for those who prefer shopping lists and the direct get in/get out approach, I’ve compiled a list of five interesting items and vendors worth checking out this weekend at The Moss Street Market (www.mossstreetmarket.com), located on the corner of Fairfield and Moss Street every Saturday from 10am-2pm until the end of October. 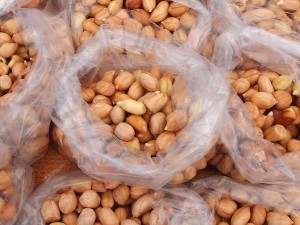 Sprouted peanuts, you say? Yes. They exist. I always knew they must, but never gave it much further thought. And surprise – they are absolutely delicious. Sprouted, germinated, living (full of super bioavailable proteins and healthy sugars), these treats are also special because you can’t just get them at any old grocery store. The taste is surprisingly non-peanutty; similar to other kinds of sprouts they are vaguely reminiscent of their mature flavour but possess a unique taste of their own. Farmer Tomash Aulich recommends tossing a handful into a stir-fry right as a finishing touch, mixing them into salads or quinoa, or just eating them fresh as snacks. They also make great snacks for young kids. 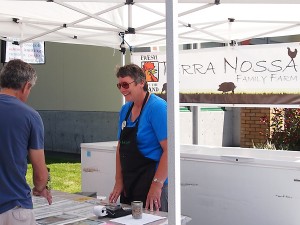 One thing that’s often underrepresented at Farmers’ Markets hereabouts is fresh and frozen meat. Of course, there are logistical reasons for this, the obvious main issue being refrigeration. Luckily, Terra Nossa Certified Organic Family Farm found a way around this dilemma and can be found every Saturday at Moss Street with their cheery banner slung above two portable deep freezes. Choose from pork, chicken, lamb, mutton, or turkey in a variety of cuts (based on availability) as well as fresh eggs and an assortment of sausages. 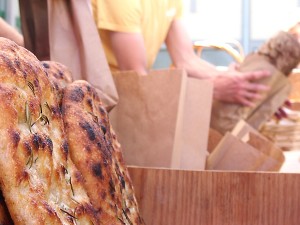 Byron Fry has caused quite a stir in the past year or so, with his upstart revival of an old family bread business, championed these days via mobile brick oven. Although, it would now seem from Fry’s Tumblr account that a more permanent location may be in the works (he was too busy bagging bread to stop and chat). His Moss Street stall is located near the back of the market inside the fenced area, usually identifiable by its snakelike lineup and carb-ravenous patrons nervously praying he hasn’t yet sold out of their favourite loaf. Some of his rustic creations include Focaccia, Honey Rye, and Whole Wheat Country Loaf (with Metchosin-grown wheat and rye). 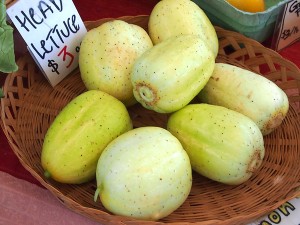 This Sooke farm’s small and colourful stall is hard to miss – jam-packed with all colours of veggies, fruit, and bouquets of cut flowers for sale, plus a separate table of packaged dried seeds. This week I noticed the eye-catching bunches of rainbow radishes, and a basket of Lemon Cucumbers, named for their resemblance to lemons rather than their taste (although they apparently take on a citrusy essence the longer they age). Lemon Cucumbers are great in salads or just as a cool snack on their own. And who says you can’t eat one whole like an apple for a refreshing snack? 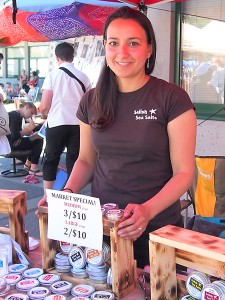 Husband and wife team Jeff and Jessica Abel head out in their boat on the Salish Sea (Juan de Fuca & Georgia Straits) to harvest the salts for their various Salish Sea Salt concoctions, which they tin and sell at Moss Street and several other markets around Victoria (you can also order off their website www.salishseasalts.ca). It seems like every time I visit the market they have at least one new artisan salt blend I haven’t yet discovered (Pure, Lemon Pepper, Curry in a Hurry, Sweet Smokey Maple, and Rosemary Infused are a few of the choices). Luckily for salt lovers like myself you can buy 3 medium tins for ten dollars. I personally enjoy the Lemon Pepper Sea Salt tossed with olive oil over a simple raw kale salad.

July|August issue on the stands. Read ...
Read More
Earlier this month the brand new Edible Canada at the Market officially opened its doors to the public. The 3,500 square foot culinary centre in the ...
Read More