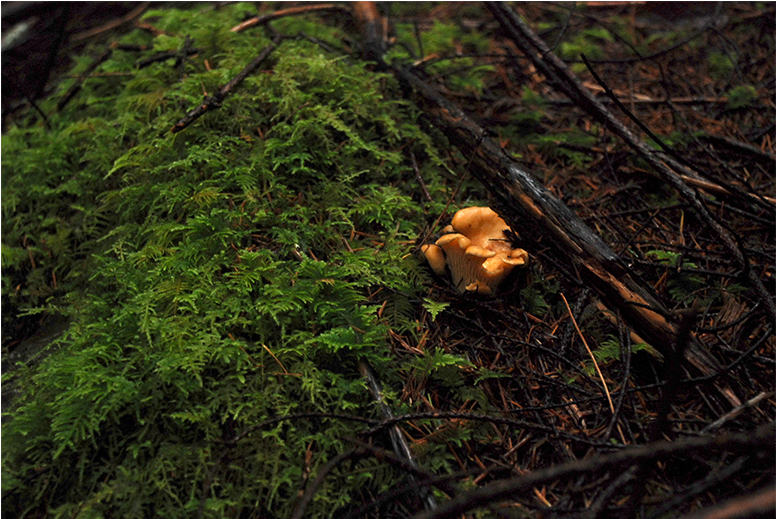 The sun was setting as we drove along the twisting highway up the coast, trying to beat the rain we could see showering over the ocean inlet to the West. As we passed the sign coming into Port Renfrew, raindrops started to patter across the windshield, almost like fate. It seemed so fitting – more than mere coincidence – that we were welcomed by rain to one of the wettest places on Vancouver Island.

Although it’s only a two-hour drive from Victoria, almost 4 metres of rain are dumped on Port Renfrew each year, making it a great spot for mushrooms and those who love the delicacies – or income – that they provide. Although the light was fading and we had yet to even set up camp, all we could think about were the golden treasures popping up across the forest floor to greet the rain.

The next morning after the Moka-Pot was brewed and bacon devoured, we pulled on our ever so flattering rain gear. Our small bodies got lost in the extra-large, fluorescent yellow monsters, and after a bit of rolling sleeves and belting with bungee cords, we set out. At least the hunters would see us, we thought.

Almost immediately down a fairly well used logging road, we found a patch of forest that looked promising for chanterelles – a mature canopy of trees (second or third-growth) on a slope, with a thick moss carpet and little other ground cover. I pulled the White Wagon of Wonder (a ’91 Volvo station wagon – our adventure car) off to the side of the road and ducked in. We had barely broken through the veil of trees lining the road shoulder when we were rewarded with chanterelles and lobster mushrooms, although the latter had been enjoyed by grubs a bit too much.

Our initial excitement slowly faded as we wondered this way and that through the woods, with meager results. We moved locations a few times, each stretch coming out with little more than a handful to show for our efforts. Maybe these spots are not quite wet enough yet, maybe in October they’ll provide us with more. The mushrooms follow the rain. First of the season chanterelles are found in areas like Sayward or Tofino, stretching into Port Renfrew, Campbell River, Cowichan, and even East Sooke park as the days wear on. This is by no means an exhaustive list either; where there is moisture, there are likely mushrooms!

When I think about the amount of time that I have spent searching for mushrooms, as opposed to the time that I have actually found them, well, I just stop thinking about it. Don’t assume you can take the easy way out and turn to Google or online forums, one does not simply ask where to find mushrooms. That would be like asking a magician to share her tricks, and unless it’s a close friend who is willing to share the bounty, most foragers stay tight-lipped about their spots. The beauty of being a beginner!

Foraging is like a grown-up treasure hunt – half the fun is searching for the jewels, it offers such an exciting reward. It also carries a huge risk factor, as Bill Jones so perfectly states in the introduction to his book The Deerholme Mushroom Book: “Most of our lives are spent wrapped in civilization. We are nestled in our cars, houses, offices, and landscapes. Stepping outside of this comfortable zone, we find the wilderness lurking at the edges of our world. It is here that the mushrooms live, waiting to feed us, kill us, heal us, or alter our perception of reality.” It really could ruin or end a life if one was to eat the wrong mushroom, and it has done just that many times before.

Before you simply march into the woods, basket in hand and thoughts on dinner, you need to be prepared, and a large part of that is education. The absolute best thing to do as a beginner is to find a guide. Reading is fantastic, but having an experienced picker out there with you is priceless. They will show you exactly the environment you need, what plants like to grow close to the mushrooms, what poisonous look-alikes exist and how to tell them apart, among many other things. Whether it is a helpful friend or a paid guide, it really is a highly recommended must, at least for the first few adventures.

Bill Jones offers some fantastic foraging courses – complete with wild lunch – throughout the month of October. More information is available on his website.

The Southern Vancouver Island Mycological Society (SVIMS) is a group of mushroom-crazy folks who gather often to forage, discuss, and eat mushrooms. Members range from amateurs to Mycologists with PhDs; they are a huge source of information. Membership cost for one family is only $20.00 per year. http://www.svims.ca/

The Metchosin Biodiversity website has a very comprehensive list of all mushroom related activities going on this fall. You can find it at: http://metchosinbiodiversity.com/mushrooms/

At the end of our brief mushroom adventure, we barely had more than enough Chanterelles to accompany our Metchosin pork chops that evening. Although a disappointing end to our search, some is better than none and we enjoyed those chops and shrooms with hard-earned delight! We are not discouraged though, with each trip we learn some more, and on our next weekend we will be right back out there determined to find more – the hunt is on and we’ve only just begun.

WARNING: Mushrooms can be extremely hazardous, common sense is the most important tool when picking – too many people have died or been critically ill from eating the wrong mushroom. Such reckless behavior is not something that should be combined with foraging; the woods are dangerous enough already. Unless I am 100% sure that I have found what I’m looking for, I don’t even touch it. When in doubt, go without.

Some wonderful mushrooms waiting to be picked or purchased this fall: