The concept of biodynamic farming is receiving much attention around the globe and is beginning to gain momentum in the world of coffee production. “It just takes coffee farming to a whole new level,” Mickey McLeod, President and CEO of Salt Spring Coffee said. As part of its In Season offerings that brings in small amounts of high quality coffee from around the globe at the peak of harvest, Salt Spring Coffee has made two partnerships with biodynamic coffee producers in South America. Currently in season is Byron’s Maracaturra, a direct-trade natural processed coffee rich with notes of dates, cinnamon and chocolate.

Byron Corrales, the coffee producer, has been adhering to biodynamic farming practices on his farm in Nicaragua for over 25 years. From cultivating rich, healthy soil using organic plant matter and the manure from his cattle, each component of the farm serves a specific purpose in the overall coffee production. This kind of farming, which takes a holistic approach, is one that McLeod deeply respects. “It’s a complete cycle and there are no external inputs,” McLeod said. “It’s about respecting every little critter.”

While such practices undoubtedly result in a superior product for the consumer, McLeod explained that the producer and the workers are the ones who reap more benefits. Not only does biodynamic coffee farming benefit the environment by creating healthier soil and an increased yield in beans, it also offers better working conditions for employees. Biodynamic farms like Corrales’ provide their workers with housing and healthy food grown right on the farm. In addition, workers are not exposed to harmful chemical pesticides and fertilizers often used in modern-day coffee farming. 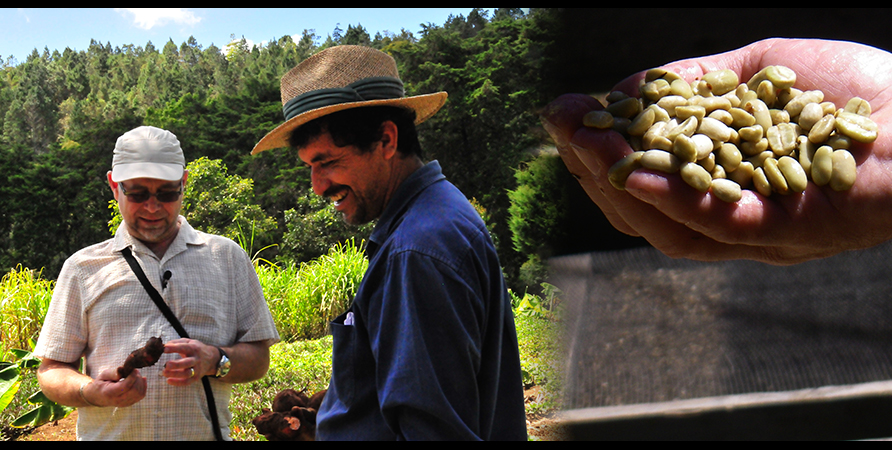 In keeping with the consciousness of ethical practices and environmental awareness, McLeod explained that coffee drinkers can play an important role as well. “The consumer is the biggest offender,” he said, explaining that from bean to cup, the largest carbon footprint comes from the consumer. Boiling too much water, not composting coffee grinds and coffee wastage create even more carbon emissions than the roasting process. “We, at the end of the roasting process need to take as much care and appreciate the work being done by the producer.”

In working to build a demand among consumers for such an environmentally conscious cup of joe , McLeod is hopeful that biodynamic coffee farming will become more popular. In fact, this year Lima, Peru will play host to a biodynamic coffee symposium. “I’m very excited about where this could go,” he said.

http://www.saltspringcoffee.com/videos/making-maracaturra-nicaragua/ (link to a video journal of Byron’s farm)

Superflux Cabana has opened upstairs at 804 Broughton St (the former location of The Livet). Featuring lots of Superflux beer and a menu that ...
Read More
January|February issue is on the stands! Pick up a copy, or read the digital version. Read ...
Read More
Warmer weather has finally arrived, and it is no longer only the kids craving cold desserts. If you’ve had a hankering for something sweet, ...
Read More