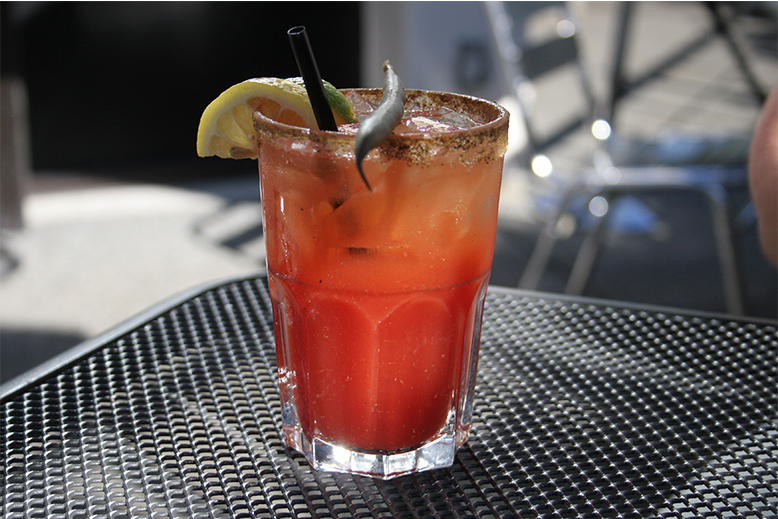 Different cocktails have different philosophical traditions attached to them. At least this is how I see it. I still reject the notion that, just because something is served in a martini glass, it can be called a martini…or have the “~ini” suffix attached to it. A martini is gin, vermouth, and an olive (maybe a lemon twist), mixed with ice for a moment then poured in the glass. It’s not that the other so-called martinis are bad; some are quite nice, but they aren’t real martinis.

Part of this has to do with the history and the elegance of the martini. It is a cocktail that has earned its place in the pantheon of fine drinks, and doesn’t deserve to be “reinvented” by parvenu mixologist who finds themself suddenly installed in the position of power behind a bar.

The Caesar, however, that uniquely Canadian cocktail, is another sort of creature entirely. In order to elucidate why this is, I sat down with Liz McArthur, who runs a blog entirely devoted to drinking and reviewing Caesars all around the Victoria [hailcaesarvictoria.weebly.com]. Liz also works at CFUV 101.9 FM as a radio documentary and podcast producer, so you can be sure she brings a high level of impartial, journalistic integrity to her drink reviews.

The impression I get from our conversation is that, while the Caesar has a definite recipe of origin, part of the glory of the drink is that all of the elements can be tweaked to create a unique Caesar experience. We know that the Caesar was invented in Calgary, Alberta in 1969 by a man named Walter Chell. Chell was a hotelier and restaurateur who wanted a signature drink evoking the flavours of Italian cooking; specifically Spaghetti alle vongole: a pasta dish mixed in with tomato sauce and clams.

This impulse might seem suspect, however the result was delicious, and supremely popular. Hundreds of thousands of Caesars are consumed all over Canada every year. The original recipe is vodka, tomato and clam juice, Worchester sauce, a celery salt rimmed glass, and a celery stick, all served in a glass with ice. As I say, though, people love to mess with the recipe.

Unlike the martini, then, I think of a Caesar in the same terms as I think of Plato’s notion of the chair as it exists in the universe of forms. A Caesar, like a chair, can look any number of ways; its design can show innumerable variants. However, we always know when it is a chair and when it is not. Similarly, a Caesar can have any number of things in it, but we always know when it is a Caesar (and not a bloody mary, for example).

Liz notes that the Caesar at Fishhook (her absolute favourite) uses a prawnato juice, made with Fishhook’s very own in house prawn and tomato mix. The top of the drink also has prawns placed in it. Thus, we still get that powerful flavour of ocean and tomato, mixed with the vodka. yet it is rendered in a different, playful way.

At Sult, meanwhile, the Caesar is served with a boiling hot mini pierogi on it.

At the Jam Café the Caesar is called a “bourbonator” and is served with bourbon instead of vodka, and has a hot slice of bacon (as opposed to a cold greasy slice, Liz notes) inside of it. Is that still a Caesar? Yes, absolutely! The playful invention is part of the fun.

It’s quite common for the green crunch stuff to be mixed around. Celery can easily be replaced with a pickled bean, or a pickle. And, from what I am told, even the replacement of vodka with tequila, whisky, or gin doesn’t seem to matter. What remains essential is the seafood/tomato vibe, and the various balances between sweet, fishy, salty, and sour. In fact, Liz points out, it is often the Caesars that are a little bit different and bizarre that stand out.

Still, if you want to have a very “elegantly executed” traditional Caesar then Ferris’ and Bartholomew’s Pub both do a great job, while respecting the tradition.

One difference between a martini and a Caesar, as Liz explains it, is that a Caesar is not necessarily an elegant drink. It is not the sort of thing one cause use to get well-oiled during a night on the town. Caesar is a meal unto itself. It is filling, and generally it isn’t possible to consume more than one or two; preferably while hung-over and in coordination with a greasy Sunday breakfast. I’ve certainly done this myself at John’s Place.

To be honest, I don’t entirely know why I think Martinis should stay pure, and Caesars should not. I don’t know why I am evoking Plato in order to defend this point. There ought to be a university course, or a Phd project undertaken on the importance of purity and variation in the field of mixology… but perhaps this is a problem for another day.

What I have learned, though, is that there is an entire subculture of people who blog, write, and make videos about Caesars. They all see it as a grassroots drink. Not something fancy, but more of an all-Canadian comfort item, perhaps like a liquid cup of KD or something.

On Sunday Nov. 20 there will be a caesar battle at Cornucopia in Whistler

Shawn Soole’s latest book swings open the doors to the world of Canadian cocktails CHIPPENHAM, UK, 20 September 2019—Hidden in the vast northern ...
Read More
It’s all about cocktails, the home bar, what to buy, and what to serve. Founders Kyle and Nate launched their bar consultancy, The Nimble Bar ...
Read More
It’s almost summertime. And in case you didn’t know, that means gin cocktails on the patio. Vancouver Island has a plethora (yes, I just said ...
Read More
Press Release — Legendary mixologist Lauren Mote and Four Seasons Resort and Residences Whistler have joined forces again to elevate the Spirit of ...
Read More
Little Jumbo played host to Nimble Bar Co.’s The Complete Bartender Competition, January 16, 2019 Last Wednesday, I judged my first cocktail ...
Read More
British Columbia’s licensed restaurants, bars, manufacturer lounges and caterers will be able to age and infuse liquor in order to create their own ...
Read More