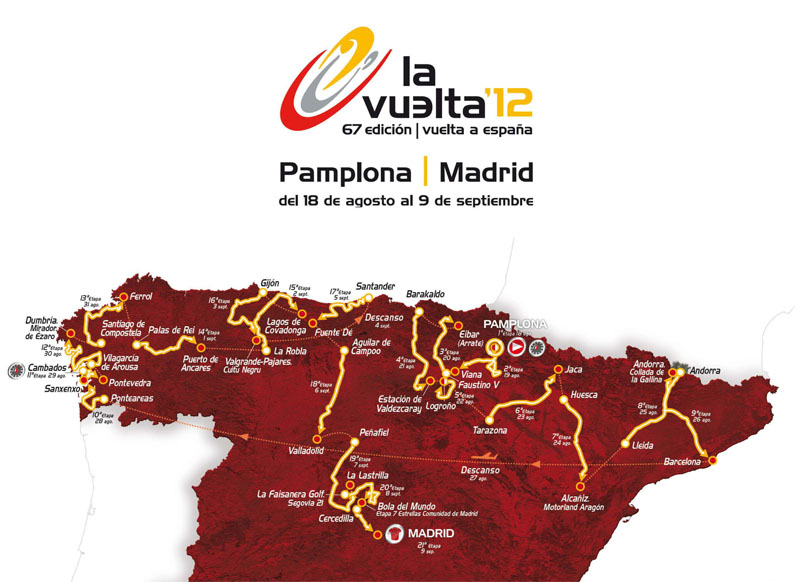 Regular EAT readers will know that I am quite fond of the Tour de France, tweeting the route with a daily DRINK. Yesterday, la Vuelta a España began – Spain’s Grand Tour, and their equivalent to France’s le Tour. While the route changes each year, the format of the race stays the same with the appearance of the passage through the mountain chain of the Pyrenees, and the finish in the Spanish capital Madrid.

This 67th Vuelta a España is made up of 21 stages and will cover a total distance of 3,360 kilometres. 22 teams of nine men each started yesterday’s team time trial around Pamplona. I will follow their trail through northern Spain with a glimpse of the local drink customs and traditional tastes. Salud!

Day 1. Saturday, August 18. The Team Trial in Pamplona was just north of Navarra’s vineyards. All wine producers are within 30-90 minutes of the great city. #Vuelta

Day 4. Tuesday, August 21. Today’s #Vuelta headed south to Rioja, home to some of the most majestic and long lived Tempranillo wines in the world

Day 12. Wednesday, August 29. Today’s #Vuelta riders began in Cambados, also known as the Capital of Albariño and founding city of the Albariño festival.

Day 17. Monday, September 3. La #Vuelta began today in Gijon – known for its many ciderhouses, and featuring a well-travelled “Cider Trail”

Day 21. Friday, September 7. Riders began today in Peñafiel, the town considered to be at the heart of the Ribera del Duero wine region. #Vuelta

For the ninth year in a row Rancho Vignola is setting up its Vancouver Island Harvest Sale here at the Mary Winspear Center in Sidney. Many of ...
Read More
Season’s Greetings EAT readers! We at EAT are looking forward to all the wonderful seasonal baking on offer around the city. One of the great joys ...
Read More
Masterclass Candied Citrus Holiday ...
Read More
November | December issue on the stands. Read ...
Read More
I like acid. Like might be too soft a word. On a hot summer day, nothing says refreshing like a glass of bright and fresh wine with acidity so sharp ...
Read More