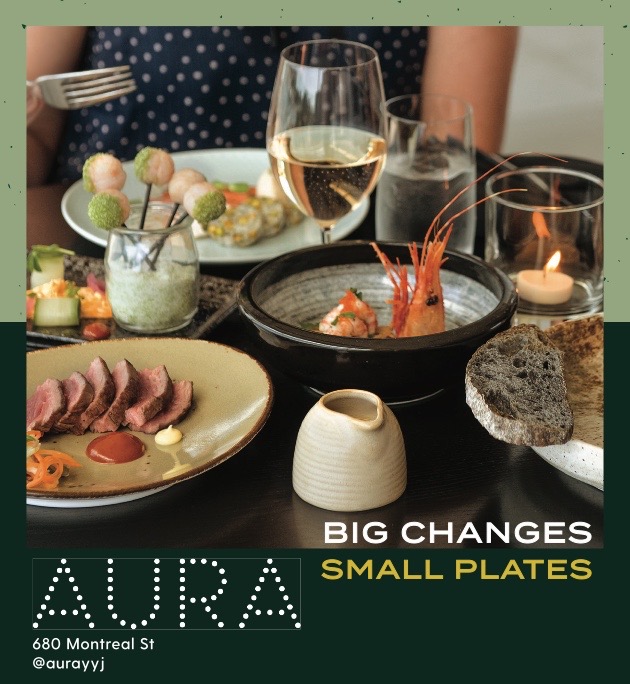 When I sit down with executive chef Takashi Ito, it’s almost a year to the day since Aura restaurant closed for renovations.

Though he’s looking relaxed and tanned, it’s clear that the chef is ready to get back in the kitchen, and today I’m getting a personal tour of the new menu, creative dishes his talented team has been working on for nearly 12 months.

The wait has been worth it.

“The concept is small plates — we are the first hotel restaurant to offer only small plates,” Ito says of the new sharable menu in the Inn at Laurel Point’s sleek new dining room.

Though sharing has become the buzz in many pubs and casual eateries, that’s not what you’ll find at Aura. Every plate provides a deep dive into their culinary artistry, pared-down versions of the upscale entrees you’d expect at a creative top table. Ito says he hopes diners will each try two or three plates (instead of the usual single main dish) to get a real taste of his chefs’ talents.

“We have so much to offer here,” says Ito as we dig into several dishes featuring an array of local ingredients and elevated techniques. “Our team represents many cultures and much experience. I wanted to explore how could we showcase more.”

The menu includes 27 unique offerings, and I know it will take more than one visit to dip into all of the innovative corners. We start with what I am sure will become a favourite for me — little shrimp “lollipops” with humpback prawns, cocktail sauce, pickled vegetables and citrusy lemon gel, the molecular-inspired incarnation of shrimp cocktail.

Other comfortingly familiar yet artfully updated dishes follow. There are potato “tots” topped in a rich lamb ragu with blue cheese and sumac-dusted béchamel. The deconstructed “SPAM” sushi features a hearty slice of their version of the luncheon meat on crispy rice, with a soft-poached egg and aged cheddar. 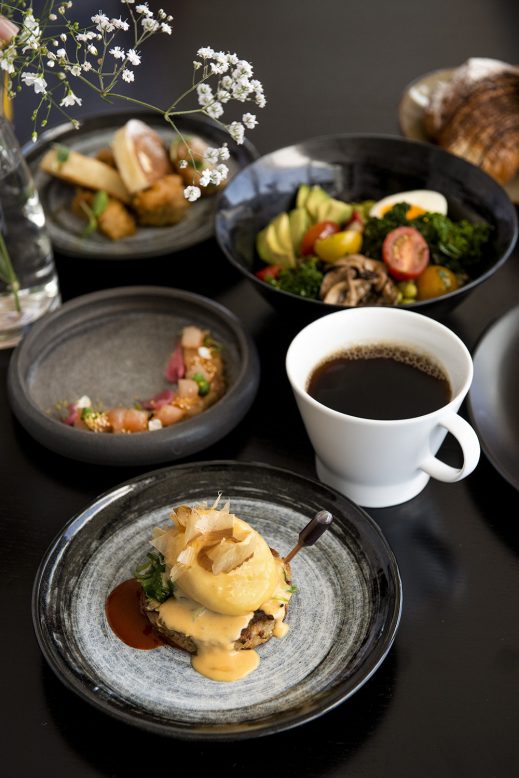 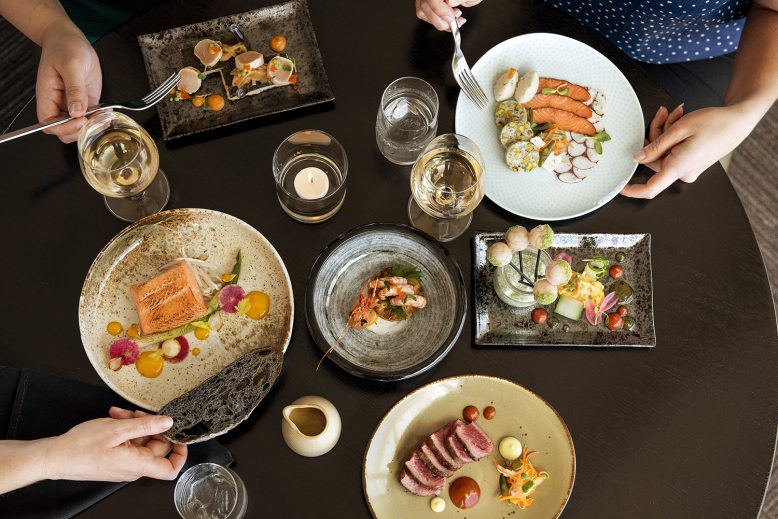 Some dinner choices at Aura

Ito has included a take on of “one of my favourite childhood foods” on his menu, too — a prawn and smoked salmon okonomiyaki pancake, topped with a crunchy, deep-fried prawn head, tobiko and togorashi mayo, a version of his 2019 Gold Medal Plates award-winning dish.

And for vegetarians, there are tasty ideas including a truffle and celeriac gnocchi plate and a vegetarian Scotch Egg, made with cashews and served with salsa verde.

Of course, meat and seafood are sustainable, and fresh ingredients come from local growers. Breads, like the big slab of grilled focaccia, are made in house, and everything on the plate is made from scratch, whether it’s the XO sauce for the BBQ Sambal Skate wing or the house-made prawn and scallop mortadella.

Though Ito says he is sad to have lost seven cooks over the much-delayed renovation, many of the young chefs he has mentored here, and who form the backbone of the new kitchen team, have remained. Austin Lu takes over as Aura restaurant chef, while Manpreet Sethi swaps jobs to head up the hotel’s banquets. Pastry chef Kimberly Vy, a master of the sweet kitchen, remains at the helm, and the chance to have more than one of her truly exquisite desserts makes the small plate idea a keeper.

“Instead of one dessert, you can have two for the same price — or six or seven to share for the table,” says Vy of the dozen miniature creations on the dessert menu, between $5 and $9 each.

The new restaurant has a new entrance (behind the new lobby that was still under construction when I visited). Once the federal government finishes its work remediating the Inn at Laurel Point (also a year behind schedule), the hotel will have its harbour views, walking paths and parkade back. There’s even a new private dining room overlooking the water.

It’s been a long road to recovery for this iconic hotel and dining room, but surely the original owners and architects would be pleased with the artistic results.

For the ninth year in a row Rancho Vignola is setting up its Vancouver Island Harvest Sale here at the Mary Winspear Center in Sidney. Many of ...
Read More
Season’s Greetings EAT readers! We at EAT are looking forward to all the wonderful seasonal baking on offer around the city. One of the great joys ...
Read More
A Hot Sauce Tasting Party Gillie Easdon gathered 15 local, house-made hot sauces and four brave souls to taste-test them. It was a mid-October, late ...
Read More
EAT’s 2020 Gift Guide. Not just for the holidays!   Bolen Books Flavor by Yotam Ottolenghi ($45.00) Cat’s Meow Trivet ($6.95) Book Seat ...
Read More
It’s a cold and rainy evening in early November. Covid cases are on the rise everywhere, and the world is anxiously awaiting the final US election ...
Read More
Originally published in EAT Oct|Nov issue. Are you missing those romantic date night dinners, a favourite dish from a local chef, the fluffy ...
Read More

For the ninth year in a row Rancho Vignola is setting up its Vancouver Island Harvest Sale here at the Mary Winspear Center in Sidney. Many of ...
Read More
Season’s Greetings EAT readers! We at EAT are looking forward to all the wonderful seasonal baking on offer around the city. One of the great joys ...
Read More
Masterclass Candied Citrus Holiday ...
Read More
November | December issue on the stands. Read ...
Read More
Now that the excitement of the holiday season is behind us, we’ve had our Big Two Days of Snow and everyone has misplaced at least one ...
Read More