VICTORIA
When Red Seal Chef and President of the Island Chefs Collaborative (ICC), Dwane MacIsaac, asks who wants to try a live raw prawn and then proceeds in a swift twist to separate the body and head and instructs you to drink the juices around the brain – you do it. Although I’m always open to trying new food at least once, this one made me a little nervous because I had just seen antennae moving a moment before. However, here I was at the historic Roundhouse Building on May 26th for Victoria’s first annual Spot Prawn Festival to celebrate the peak season and succulence of these rich ocean dwellers, so down it went. To my delight I found the natural sea water, mixed with the flavour of the prawn surprisingly sweet. The water wasn’t too fishy, as one would assume with fresh seafood, and the bits of meat that accompanied the juice were incredibly tender. The texture of the raw body was slightly more challenging to swallow, however, the flavour was far better than any other cooked prawn I have tried.

There aren’t too many events that can claim to have been conceived through a conversation between a fisherman and a chef, over an order in the parking lot of a restaurant. However, that’s exactly how the idea to hold Victoria’s first Spot Prawn Festival on May 25 and 26 came about. Chef Ali Ryan of Spinnakers and Gregg Best, owner and operator of Cowichan Bay Seafood were chatting over a fish order when they began thinking that they should do something similar to the Spot Prawn festival in Cowichan Bay, which just celebrated its fifth year. Like that festival, they wanted to create a community event that brought suppliers, chefs, restaurants, and consumers together to showcase sustainable fishing practices and provide a space for local companies to sell produce. As more people began to show interest in the event, what was initially a simple idea grew into a two-day event that kicked off with a seven course long table dinner and pairing on the Saturday night, followed by a free and educational day on Sunday.

Despite Sunday being overcast and cloudy, the rains held off long enough to ensure that the thousands of eager seafood-enthusiasts wouldn’t be left in a soppy state. Having the majority of the vendors outside of the Roundhouse at Bayview Place was risky considering that May in Victoria is infamous for having undecided weather patterns. However, the setting could not have been more idyllic. With suppliers, entertainment (hoisted high on a stage near the railway tracks), and vendors pitted against the backdrop of the sea and Washington’s Olympic Mountain range, the location made it seem as if you were out of the city and enjoying a countryside event. Parts in and outside of the Roundhouse were sectioned off so those over 19 years could enjoy some brews from local breweries such as Hoyne, Phillips and Merridale Cider – and by 4pm the cheer (and line-ups) were growing as people had filled up on seafood and were ready for an afternoon drink. Ongoing demonstrations from chefs showing how to prepare spot prawn recipes were held inside and tickets were sold throughout the event to sample mussels, raw and cooked oysters and spot prawns, prepared in every imaginable way – boiled, barbequed, seared and raw. 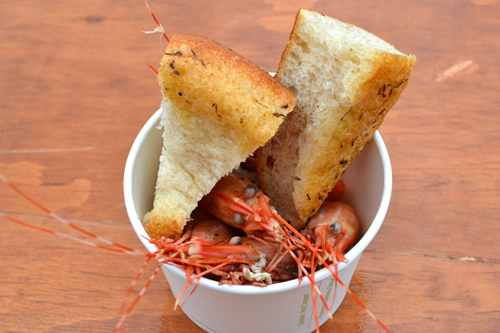 Restaurants like Spinnakers and Vista 18 were on hand to share their recipes and dishes, while farmers from Dragonfly Farms and Saanich Organics had samplings of their fresh produce and were available to answer questions or queries about local farming. One of the more unique items that was offered was a bag of spot prawn infused buttered popcorn. I was wondering where the 1950’s style bags of popcorn were coming from until I heard a child yell “prawn popcorn, prawn popcorn!” with such enthusiasm. A simple snack you wouldn’t think would work well with popcorn, yet an effective way to sneak in a new flavour for picky eaters that may otherwise be nervous to try seafood. Booths designed to help educate participants about local fishing were also set up, including This Fish, showing how to trace your seafood. Still a relatively new initiative with 3 years under their belt, their goal is to create a sense of transparency within the fishing industry and bring together the individuals that catch the fish and those that eat them. Being able to know exactly where your fish comes from is an important component in working towards ensuring an environmentally responsible fishing industry.

The event, much larger than I expected, catered not only to those interested in spot prawns but also to the little ones that came along with mum and dad. There was a space for activities such as face painting, fish prints, a kiddy pool to ‘fish’ out rubber duckies and other brightly coloured toys, as well as volunteers dressed up as pirates and other ocean creatures. The melodies of local bands such as Bucan Bucan and Sweet Lowdowns provided entertainment for the day and all in all the event was a great success. People were leaving with bellies full of delicious fresh spot prawns, and in a city where seafood is valued as a near staple having fishers, suppliers, and chefs all in one place was an excellent way to promote and encourage healthy and sustainable fishing practices. The local beer tents didn’t hurt either!

With Phase 2 beginning, restaurants and patios, tasting rooms and coffee shops are reopening. This is an ongoing process, with many changes, so we ...
Read More
Christmas in, Christmas out, every Italian grocer/baker in the city stockpiles panettone (pronounced “pan-e-ton-ay”). Bosa and Cioffi’s, ...
Read More