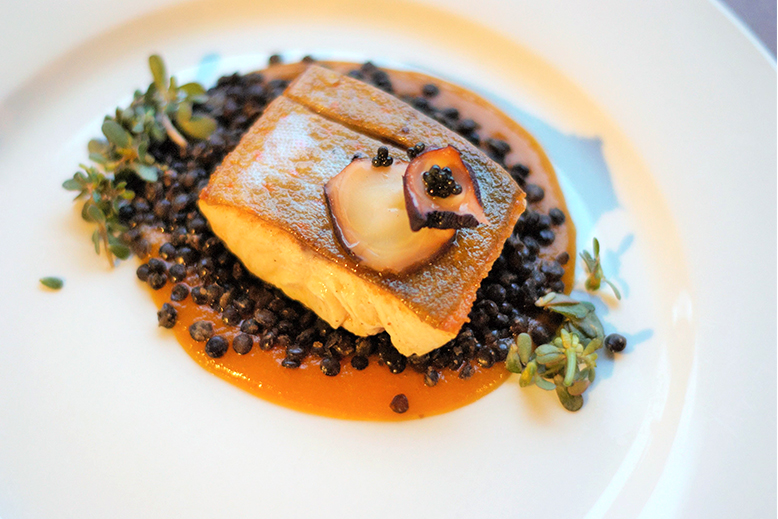 The extraordinary talent in our Province’s culinary and vintner world is alive and well, as seen this past week at Church and State Wines (Vancouver Island).

The award winning winery, recently partnered with top chefs to host a special dinner in celebration of sustainable seafood and impeccable wines. The event itself was the first of three multi-chef, wine paired dinners in the Wine Country Dinner series available exclusively to Visa Infinite card holders.

The evening brought together a sold out crowd of wine enthusiasts with a keen appetite to experience this unique seafood-themed dinner. The event provided an opportunity for guests to learn more about sustainable ocean products and of course, enjoy premium West Coast cuisine with wines carefully selected to compliment each course.

The seven-course meal and selected wines for each course are summarized below:

The evening began with flutes of Spindrift Brut, 2012 ($26) in a blend of Pinot Noir and Chardonnay and the Soleil Rose Brut, 2011 ($26) from 40 Knots Winery, an effervescent and lingering sparkling wine made in the Comox valley. Next, was a refreshing Phillips Stump Gin Summertime Cocktail created by Hailey Pasemko (bar manager, Wolf in the Fog). A lot of love went into this drink from the house-made nasturtium aperitif to the coriander infused sugar rim.

Guests nibbled on delicious canapés including salmon tartar, Albacore tuna ceviche, heirloom gazpacho and a delectable Side Stripe shrimp croquette with horseradish aioli. These were a hit: big fresh and juicy shrimp inside a warm, crispy batter. I must have wolfed back at least four!

The long-awaited Northern Divine caviar presented their Fraser River White Sturgeon roe – delicate, buttery and nutty. It’s 100% certified organic and contains no antibiotics or hormones, only pure unrefined Canadian salt to bring out the natural saltiness within the pearls.

As guests were seated, the first course, a hand-harvested Gooseneck Barnacle and watercress puree was served by Chef Ahier. “It’s a locally harvested product from the Tla-o-qui-aht First Nation (a Nuu-chah-nulth Nation with territory along the west coast of Vancouver Island in Clayoquot Sound)” said Ahier, “and an experience for people to try.” Supporting and buying from First Nations fisheries is top priority for Ahier at her Tofino restaurant, Sobo.

The Gooseneck was paired with the newly released “Fandango”Albarino Verdejo, 2014 ($25) from Naramata’s Terravista Winery. In its fourth vintage, Fandango is a blend of two Spanish grape varieties (70% Albarino and 30% Verdejo). Winemaker Senka Tennant says this one of a kind wine “started as a thought and it’s so great to see it come to fruition.”

Chef Bell, founder of (Chefs for Oceans) spoke passionately about his advocacy for sustainable seafood.

“As a Chef, I have a responsibility to educate my peers and to hopefully educate you on the importance of having healthy lakes, oceans and rivers.”

Bell’s dish, Sea Stars was a medley of raw, marinated We Wai Kai scallops, mussels and clams and sea vegetables with a touch of vanilla and citrus – perfectly paired with Sea Star Winery’s 2014 Siegerrebe ($20).

Perhaps the highest compliment of the night was paid to Nick Nutting when Bell dubbed “Wolf in the Fog the best restaurant in the country.” Nutting produced a buttery rich and perfectly cooked Tofino Ling Cod wrapped in grape leaves from Church and State’s vineyard. The fish was served whole and was passed around the table. “We want people to enjoy this fish family style,” said Nutting, “talk to each other and enjoy.” Accompanying the Lingcod was Church and State’s Trebella 2014 ($22).

The highlight of the night, in my humble opinion, had to have been Brock Bowes’ Okanagan Arctic Char (pictured at the top of the page). Cooked crispy skin style, the Char was plated with beluga lentils, fresh apricot puree from Bowes’ own trees, Northern Divine caviar, octopus bacon (yes, bacon made from octopus!) and wild harvested purslane greens – all components worked very well together. To top it off, the fish was served with a red (Pinot Noir 2011, Averill Creek) and a white (Chardonnay 2012, Tantalus) wine. Now that’s my kind of fish!

MC of the evening, sommelier DJ Kearney asserted that these latter wines were the boldest pairing of the night. However, she stood by her decision further highlighting that the Clos du Soleil Rosé carries “the white wine refreshment with a red wine structure and lots of oomph to pair well with the bison.” The Syrah too, was a good choice, being full of fruit and lots of meaty flavour.

The evening came to a close with a tasty cheese course from Dairy Farmers of Canada paired with Unsworth Charme de Lile 2014 ($21) and a pleasant surprise, the Electric Unicorn White IPA from Phillips Beer.

For dessert, and just to tempt our taste buds a little longer, Chef Bell served a green tea and seaweed pavlova along with Sea Star’s Prose 2014, a late harvest Riesling.

For further information regarding upcoming offers visit https://visainfinite.ca or Call: 1-888-711-9399

A special thanks to Don House of Integrated Digital Media Group (IDMG)  for collaborating with Visa Canada to make the Wine Country Series the success it is.

If the World Cup has got you in the mood for some international flavours, check out one of this summer’s cultural food fests. This past weekend ...
Read More