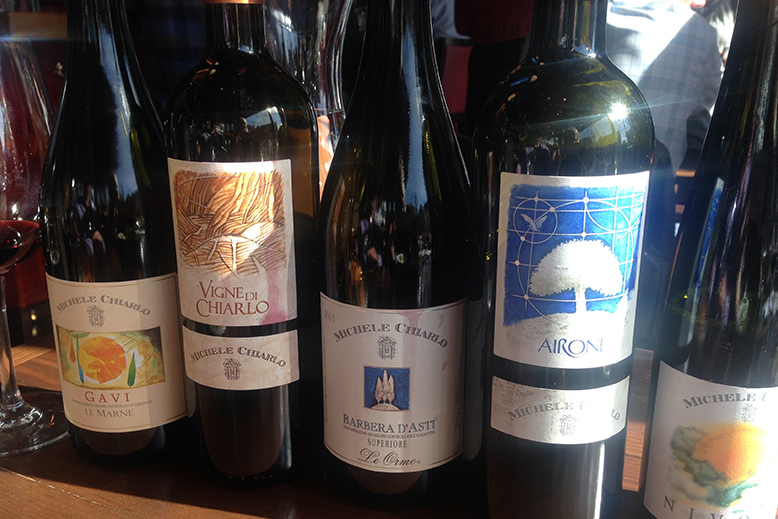 Piedmont’s fame rests on powerful Barolos and Barbarescos, but it is also home to many other wines. I explored this other side of the region at a recent lunch at Zambri’s with Luca de Marco, North America Ambassador from the Michele Chiarlo winery. What I found were supple, elegant and food friendly wines.

Piedmont lies in the northwest corner of Italy and, like most Italian regions, celebrates a number of indigenous grape varieties that are rarely found anywhere else in the world. Michele Chiarlo – a family owned winery – chooses to specialize in just four: cortese, barbera, nebbiolo and moscato. Nebbiolo stars in the winery’s Barolos and Barbaresco are worth hunting down, but those were off the menu this time round.

Cortese translates as “courteous” and the wines are indeed gentle and delicate. Sometimes called the white Barolo, the cortese grape shines in the wines of Gavi DOCG. Chiarlo produces a few Gavis, but the one we tried was the 2013 Le Marne. It has an elegant and rich mouthfeel with beautiful white peach, grapefruit, white flowers, linden leaf and just a subtle hint of fennel. At around $25 it’s a great – and unexpected – alternative to chardonnay.

Perhaps surprisingly, the barbera grape makes up almost half of the red wine production in Piedmont. With that volume, you can find both simple and more serious offerings. Chiarlo’s 2012 Le Orme (“footsteps”), Barbera d’Asti Superiore DOCG (approx.. $24) is a rich wine with red currants, black currants, tobacco, herbs and lingering spice notes (approx. $24). Easy to pair this one with tomato or meat-based pasta dishes.

Young USA consumers fell in love with Moscato (aka Muscat) a few years ago and the market was flooded with pretty basic, but very floral and aromatic wines. Piedmont is one of the traditional homes of Moscato and is used to make both Asti, which is fully sparkling (spumante), and the slightly less sparkling (frizzante) Moscato d’Asti. Chiarlo offers the delicate and charming 2014 Novile, Moscato d’Asti DOCG (approx. $19/375 ml). It’s peachy, delicate and fun – and at only 5.5% alcohol it’s perfect with fruit desserts, or breakfast.

The Chiarlo family have been growing grapes in Piedmont for seven generations. Today, Michele Chiarlo works alongside his two sons in one of the most respected wineries of Piedmont. Although steeped in the history and the traditions of the region, Chiarlo has also never been shy about spearheading innovations. In a region where single-varietal wines dominate the landscape, Chiarlo has launched two blends. de Marco reported that they found that the North American market wanted something slightly smoother than the more typical Piedmont high acid, high tannin red wines and so they created two blends.

The first blend is 2012 Vigna di Chiarlo, which brings together barbera, nebbiolo and a touch of cabernet sauvignon. Described by de Marco as “yummy”, it certainly delivers on being approachable. Vibrant red and black cherries, strawberries, hint of blackcurrents, spices and herbs are supported by a round palate, well-integrated tannins, and an overall freshness. An impressive wine for approx.. $18 and definitely one that is easy to enjoy anytime.

Next up is the 2012 Airone, Monferrato Rosso (approx.. $25). This is also a blend of barbera, nebbiolo and cabernet sauvignon, but includes albarossa. Albarossa is the child of a nebbiolo and barbera crossing and was created in 1927. It only made it out of the lab and into the vineyards four years ago when Chiarlo and some other producers decided to revitalize agriculture n Piedmont. The result is another very fresh and supple wine, with blackberries, cherries, a lovely floral lift, licorice, and spice.

It was a quick tour of Piedmont’s other wines, and enough to prove that there’s much to explore here. Barolos and Barbarescos may be powerful and profound, but it’s good to have options on a Wednesday night.