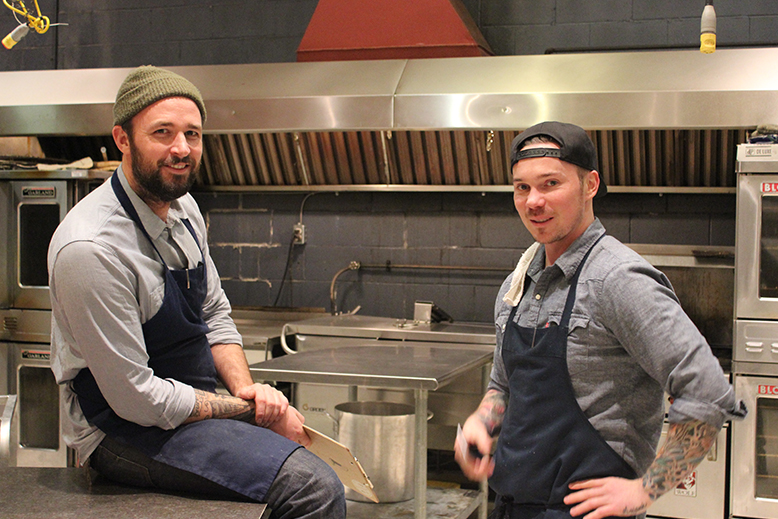 The restaurant industry in Victoria in the early 2000s, for those who were manning the dish pits, doing prep, and plating salads, was a transient affair. The backdoor of many restaurants revolved with the newly hired and the recently fired. Maybe it was because you constantly smelled like booze or maybe it was because you showed up late one too many times. Likely, it was because you finally mouthed off to the chef when you couldn’t take his barking anymore. This was a place for drifters, grifters, dropouts, and stoners. When you joined the line of a local restaurant you didn’t do it because you were jazzed about the culinary arts; you didn’t do it to be mentored into a long and illustrious career; and you certainly didn’t go it for the glory. You did it because it was a job with late night hours that came with a ready-made boys club, no experience required.

This colourful yet accurate description of the restaurant industry was provided by two of the finest deviants to ever simmer a sauce in Victoria. Liam Quinn (Salt and Pepper Fox), and Dave Bohati (Fine Food Stop) reminisced with sardonic sentimentality as they recalled their early days at the bottom rungs of the kitchen hierarchy. These two Victoria-born chefs cut their teeth behind the lines of Pescatores and spent their lives weaving in and out of each other’s careers. In fitting fashion, over a decade on Quinn and Bohati teamed up with Grant Gard (Part and Parcel) for a one-night-only chef throw down, serving up an epic seven-course tasting menu for the Atlas Pop Up Dinner at Part and Parcel.

Eat Magazine met with Quinn and Bohati in the Salt and Pepper Fox kitchen in Esquimalt as they prepped for their big night. Quinn and Bohati pumped loud music through the space as they attended to large cuts of meat and mountains of onions and Jerusalem artichokes grown in Quinn’s backyard. There is a true harmony between the chefs as they work together, checking each other’s work and swap stories from the glory days: “Remember when your appendix burst?” asks Quinn. “We were like, ‘harden up dude’ and the next day you were in the hospital”. Ah yes…the good old days. Pescatores during the late 90’s and early 2000’s was a breeding ground for some of Victoria’s best chef’s, such as Jonathan Lee of Chorizo & Co. and Greg Ward who is now at Brasserie L’Ecole; and it is where many of these chefs learned how to make it through a busy night without breaking. “It was very Kitchen Confidential…but we got to work with a crazy team…and this is where we got indoctrinated into the culture”, says Quinn.

While their early days at Pescatores provided for a crash course in life behind the line – how to manage burns on the fly, how to look tough yet deferential as the chef scream profanities at you, and how to drop a shot of Jagermeister into a beer without looking like an amateur – eventually it was time to move on. “I knew I had to leave Victoria if I wanted to get better” said Bohati as Quinn nodded in agreement. “To get your own style of cuisine, its like graffiti (Bohati was a well-known graffiti artist back in the day), you cant just go out there and bite other people’s stuff…or open a cook book and expect to be a great chef, you have to pay your dues; see different techniques, different styles. You have to see what’s going on around the world and what’s available. There are just so many factors that go into being able to excel at the craft.” Both chefs agree that the years they spent at Pescatores had a critical impact on their decision to continue cooking, “We learned that it takes a special bread of person to slug out services, to take an ass whooping, Its great that we were apart of that era (at Pescatores) because it made us stronger chefs” 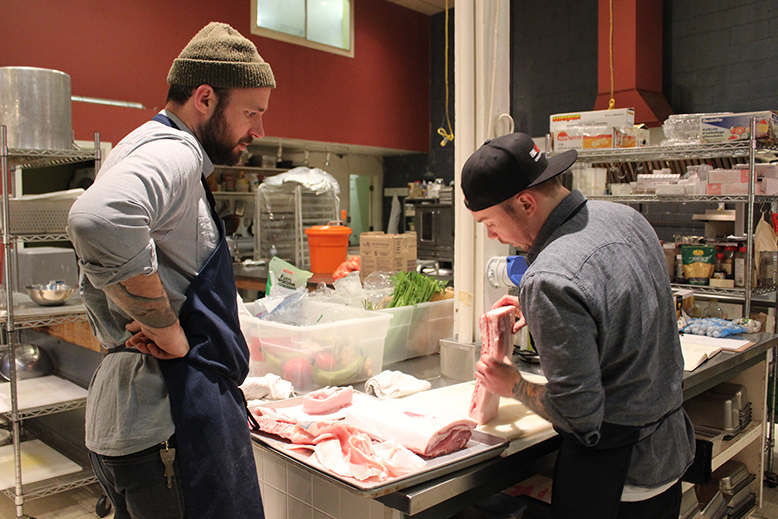 These days Quinn runs the chef-driven lunch delivery service, Salt and Pepper Fox, and after great success with opening the Market in Calgary as the executive chef, Bohati went on to win last-years Gold Medal Plate Award in Kelowna. Bohati now works for Fine Foods Stop, where he can relish in the some of the best ingredients this side of Montreal and brings his experience to procuring and supplying some of the top restaurants on the West Coast. The two chefs have stayed in close contact over the years; working together at Calgary’s Rush where Quinn had been sous-chef and where Bohati eventually became executive chef. Quinn went on to be work with Justin Leboe as executive sous chef for 00 Pizza, Model Milk, and Clive Burger, among others. Of course, there were highs and lows for both chefs. Trying to find the right kitchen and the right team can take a lifetime. Now, after years of putting in time with mentors, learning from each other’s successes and failures, and making every mistake in the book, both chefs have come into their own.

The Atlas Pop Up Event – the brainchild of Quinn and local designer and artist Caleb Beyers – brought Bohati and Quinn back together behind the line once again. The opportunity to return to Victoria to collaborate and to plate dishes for the city that raised them was too much to pass up. Grant Gard, co-owner and executive chef at Part and Parcel was happy to offer up his place for the event and joined the team to put out some truly spectacular dishes. They worked together to bring in flavors and ingredients from around the world, including Thai, Caribbean, Japanese and Italian, drawing them together in a truly West Coast theme. Bohati brought in some magnificent Himalayan black truffles and diners watched in awe as they were generously grated over a delicate dish of Jerusalem artichoke agnolotti. The chefs worked in unison on the countertop of Part and Parcel in full view of all those who attended. It was not just about the spectacular food, it was about witnessing the chefs coming together to demonstrate all they had learned and to marvel in the joy and reward they get out of making beautiful food. The dinner was a clear expression of the hard work and dedication that the chefs have put in over the years and was a true example of their cumulative experiences.

So often we let dishes pass in front of us with out considering the years of experience and devotion that go into it. We forget that many of our favorite chefs started in the dish pit just hoping to get a chance to arrange lettuce leafs on a salad plate. We are oblivious to the fact there were burns, cuts, falls and breaks that taught them how to steel their nerves so they could get through an insanely busy service while still putting out a perfect steak frites. The dishes that are put in front of you have a history of camaraderie, mentorship, heartbreak, and failure behind them and sometimes it’s worth sitting down and telling that story.

Superflux Cabana has opened upstairs at 804 Broughton St (the former location of The Livet). Featuring lots of Superflux beer and a menu that ...
Read More
January|February issue is on the stands! Pick up a copy, or read the digital version. Read ...
Read More
Good For You Review   Canadian consumers are increasingly searching for quick, “grab-n-go” snack options that will not derail their healthy ...
Read More