Larry Arnold, Isabelle Bulota, Cinda Chavich, Jennifer Danter, Jacqueline Downey,  Deb Garlick, Denise Marchessault, Elizabeth Monk, Daniel Murphy, Elizabeth Nyland, Adrian Paradis, Julie Pegg, Adrien Sala, Shelora Sheldan,  Johann Vincent, Rebecca Wellman.
Publisher Pacific Island Gourmet |  EAT ® is a registered trademark.
Advertising: 778.350.6962, or get in touch
Editor Email: editor@eatmagazine.ca
Mailing address: Box 5225, Victoria, BC, V8R 6N4
Tel: 250.384.9042, 778.350.6962
Since 1999 |  EAT  Magazine is published six times each year. No part of this publication may be reproduced without the written consent of the publisher. Although every effort is taken to ensure accuracy, Pacific Island Gourmet Publishing cannot be held responsible for any errors or omissions that may occur. All opinions expressed in the articles are those of the writers and not necessarily those of the publisher. Pacific Island Gourmet reserves the right to refuse any advertisement. All rights reserved.

1. EAT has advertisers in our magazine and on our website; they are our primary source of income. Our company, Pacific Island Gourmet, employs a dedicated advertising team responsible for selling ad space in EAT and on EatMagazine.ca. The EAT editorial team does not accept money or other consideration from companies as a condition or incentive to write a review or story. All editorial content on EAT is based on the editor’s discretion, not on the desire of any company, advertiser or PR firm. Occasionally EAT and EatMagazine.ca may publish sponsor content, which will be labelled.
2. EAT contributors are not allowed to ask for free meals or drinks. Anyone identifying themselves as being on assignment for EAT will be able to prove their employment. 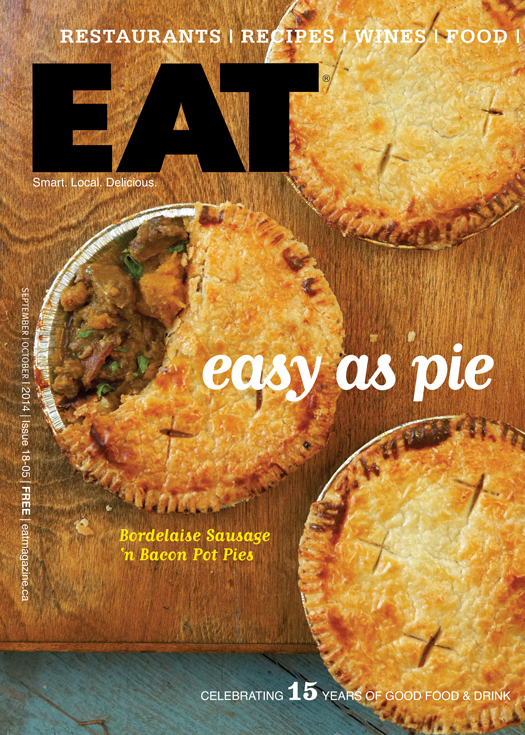 EAT Magazine was started by founder and editor Gary Hynes. The first issue was 24 pages, had nine writers, one photographer and 10,000 copies were distributed. Local Cobble Hill asparagus is featured on the first cover
Vancouver Island lost its only poultry abattoir in 1999 and it wasn’t until 2004, through unwavering determination that farmer Lyle Young of the former Cowichan Bay Farm, opened Island Farmhouse Poultry. The abattoir services all small flock poultry farmers, and Island-raised chicken and turkey is enjoyed on menus everywhere, and readily available and affordable through many independent grocers.

After attending Slow Food’s Salone del Gusto in Torino, Italy, Sinclair Philip of Sooke Harbour House, and chef Mara Jernigan formed Vancouver Island’s Slow Food convivium in 2001. Buoyed by the organization’s commitment to cooking and farming to raise awareness about food security and the importance of local food, Philip and Jernigan inspired many V Islanders to take up the cause. 2003 – Heritage Red Fife Wheat was included in Slow Food’s International Ark of Taste 2009 – Cowichan Bay became the first and only Cittaslow (Slow City) in North America to date.

In May of 2003 EAT held its first Awards of Excellent (now called the Exceptional Eats!). Peter Zambri, Edward Tuson and Sean Brennan were named the top three chefs by their peers in the industry. In that same issue, Heidi Fink wrote about The Beauty of Lard.

The BC wine industry takes off and the number of wineries passes the 100 mark. Larry Arnold reviewed the Venturi Schulze Pinot Noir 2001 and noted the saturated inky purple colour and intense blackberry, cherry and violet aromas.

On tour in the fall of 2004, Anthony Bourdain’s presence in Victoria was the most impassioned pep rally I’d ever seen. The sold-out talk was packed to the rafters with chefs, many of them still in their whites, dishwashers, waitstaff, cooks and fans of his brash no-nonsense style. We roared our approval.

Chefs Luke Young and Paige Symonds added a new flavour to Antique Row by opening Choux Choux Charcuterie in 2005 and introduced us to their world of pates and terrines, fresh sausages and sauscisson sec, and Qualicum Beach Sloping Hill Farm’s luscious pork products.

In 2007, San Francisco-based chef and author Jessica Prentice coined the term locavore defining the concept of eating locally grown foods, often within a 100-mile radius. That same year, BC writers Alisa Smith and J.B. MacKinnon wrote the 100-mile Diet: A Year of Local Eating catapulting eating locally into the spotlight. While places like Sooke Harbour House and Vancouver’s John Bishop of Bishops were longtime torchbearers of the concept, this was the first time that it was given a name and catalyzed a movement. Locavorism has transformed the way we eat, not only at home and in restaurants but how we shop for food today.

The global financial crisis effects are still being felt and has inspired out-of-the-box thinking for many small businesses, especially in the culinary world. Small-time artisanal startups often rent out kitchen space when a restaurant is closed – a win-win situation, or small startups with shared rental space, The Whole Beast and Village Butcher being perfect examples. Jason Found has begun plans for a food hub, a large accessible food processing facility with kitchen space for local food entrepreneurs and storage space for farmers. Stay tuned.

Obtaining a decent cocktail in Victoria is a very recent phenomenon. The botanical-forward Victoria Gin distilled in Saanich was launched in 2008, the first distilled spirit on Vancouver Island and the only premium gin in BC. Solomon Siegel opened the brief but unforgettable Solomon’s, the city’s first craft cocktail bar, followed by Clive’s Classic Lounge, Veneto at the Rialto, and more recently Shawn Soole’s Little Jumbo. Craft cocktails are now available at most every restaurant worth their weight in swizzle sticks.

According to a 2009 UBC study on the Economy of Social Food in Vancouver, only 48 percent of the food we consume is produced in BC. The remaining 52 percent is imported and produced by domestic and international industrial farms and processors, bought by wholesale distributors or supermarket chains.

Gary Hynes, EAT founder and editor, passes away suddenly after a short illness. His wife, Cynthia Annett- Hynes, with the help of Team EAT, carries on his legacy and continues publishing EAT magazine and focusing on the food and drink that make the Island so unique.