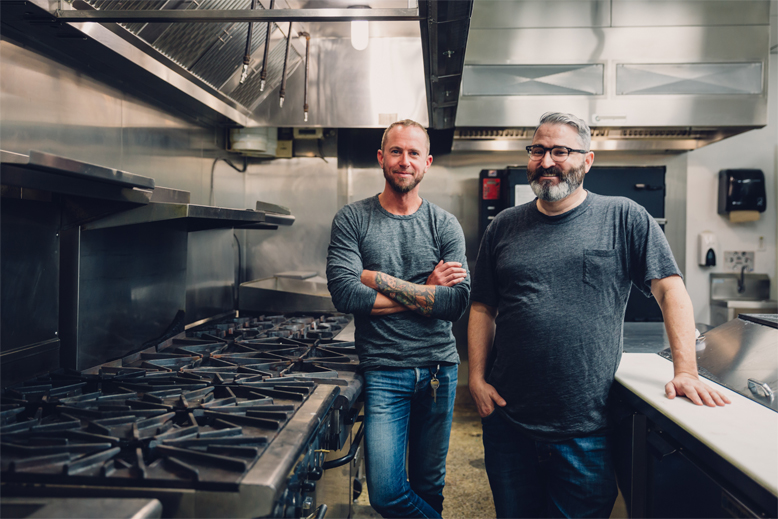 It’s not breaking news: Victoria’s restaurant scene is in the midst of varying states of crisis, depending on which Industry Insider you speak with. Opinions on the timing vary, but there is definitely a consensus that a critical point looms somewhere on the near horizon. Each passing year has seen an amplification of the factors that make restaurants such risky, low-margin ventures to begin with: commercial rental prices have risen on an incredulous arc; competent staffing has become an impossible gamut for kitchen managers; and there’s a pervasive disconnect between consumer expectation and the very real cost of presenting a plated meal. In the midst of these trials, it’s become a sink-or-swim game, and eateries that tread water just won’t cut it anymore.

Sterling Grice and Patrick Lynch are quietly prominent Victorian restaurateurs. Their first venture, Foo – Asian Street Food, has inauspiciously occupied the parking lot of the Dominion Hotel on Yates Street for more than eight years, providing more sanitary but equally flavourful versions of various Asian-style street foods. A low-margin cuisine by nature, it was always going to be an uphill battle to fill this culinary niche while upholding their personal mandate of ethical, from-scratch dishes, prepared by professionals. It made for a difficult, though sustainable model in its planning and initial execution, but times have since changed—and not for the better. Says Sterling, “When we started out, trying to get a loan, it was hard. I can’t even imagine what that looks like now.” Without the benefit of a relatively low “grandfathered” rent, set prior to the nationwide property spike over the past few years, the traditional “brick and mortar” restaurant model is becoming a consistently higher-investment, higher-risk venture.

Another side effect of the sharp increase in demand for liveable and workable space in Victoria is the surge in construction. For every crane on the city skyline, there is a construction team wherein a labourer can earn a good chunk more than he/she would sweating out the long, late hours of the restaurant grind. As Patrick puts it, “In this town, right now, a skilled food-industry worker is somehow worth less than an unskilled construction labourer.” It’s easy for those glaring at “expensive” menu items to frame the situation as some greedy restaurant owner “jacking up the price of food.” And maybe that is a reality for some of Victoria’s dining establishments, but the smaller-scale industry figures that I know, successful in their business ventures, aren’t exactly retiring to their mansions every night. Sterling, in particular, has vocalized his discontent previously, on CBC Radio’s “On the Island” program (2015), drawing a direct parallel between the percentage of revenue that a small business can viably afford to pay its staff and “people’s totally skewed idea of what food is actually worth.” My suggestion that this is somewhat of a local phenomenon, that Victoria, in particular, clings to an archaic idea of eternally static restaurant prices, and that we as a city are, in essence, terribly, terribly cheap, is met with diplomatic shrugs. No one wants to offend their potential clientele.

It’s easy game to list the issues plaguing the industry; it’s another thing to create opportunity from the downhill slide. In much the same way that modern app technology has broken businesses down to their fundamental elements and reconstructed them with more streamlined or direct delivery channels, Foo has been working at ways to restructure the current restaurant/consumer model in ways that are making more and more sense in Victoria’s increasingly challenging market. One significant result is their newest venture: The Commissary Kitchen. Occupying the corner of the Hudson building on Douglas and Herald Streets (the ex-Smoken Bones downtown location), their vision for the new space is a shared creative area for many and varied culinary uses. And a place that strives to ease some of the growing pains facing smaller and start-up food businesses across town.

The workspace is huge: four separate enterprises can comfortably work their stations simultaneously. Eighteen gas burners and three commercial ovens dominate the space, but the pièce de resistance, which lights up both Sterling and Patrick’s faces at its mention, is the newly purchased “combi-oven.” The steamer, convection and regular oven all-in-one is fully computer-programmable and also enables the production of canned and jarred goods. The $20,000 industrial smoker that is also onsite seems to be unfairly relegated to a footnote.

So, if you build it, who will come? All the equipment above, combined with the mandated infrastructure for a commercial kitchen (grease trap, refrigeration, ventilation, etc.) becomes a limiting prospect for a small, food-based business to acquire on their own, no matter how great their idea. The Commissary Kitchen can greatly reduce that cost for entrepreneurs, whether their project is a traditional restaurant-style eatery, a mobile catering company or, perhaps most relevant to the evolving culinary market, a food truck. Whispers abound of food-truck owners, desperate for affordable prep space, using sites that would never be deemed allowable by BC’s Foodsafe program. The Commissary’s professional standard of equipment, central location and accessibility by loading dock make it a logical landing spot for the ever-increasing number of local mobile-food vendors.

Unsurprisingly, the motivations behind the Commissary project are not entirely altruistic. The founders are still in the restaurant business. The kitchen doubles as much-needed spatial relief for the regularly multiplying Foo endeavours that Patrick notes are all “bursting at the seams.” In 2014, they diversified with Foo Ramen Bar, which occupies a sliver of storefront on Broughton Street (opposite the public library.) Fridays, after delivery of the weekend’s food inventory, both the original Foo and the Ramen bar are an “ongoing game of Tetris.” Not only will raw goods be easier to manage, but the Commissary venue will provide a centralized prep space for both venues, reducing kitchen labour costs. The result: they can afford to keep paying their skilled employees well in an attempt to compete with rival industries, even as rents and food costs continually rise.

The Commissary might also provide an opportunity to execute an idea that’s been in the works for years: a way to cost-effectively package their own line of restaurant-quality, publicly tested Foo sauces and cooking ingredients. The issue stalling the project until now has been that the money charged by the “co-packing” facility (which owns the manufacturing equipment) shrinks smaller-run production margins to pennies on the dollar. “We really don’t know exactly what direction this will go in … but it’s possible we can become the co-packer,” muses Patrick.

There really is a nebulous—but positive—atmosphere about the project. Among the other potential benefits: combining orders from separate businesses means increased buying power, resulting in more seasonally available ingredients from local farms; existing restaurants will now have an avenue to a “test-kitchen” and the potential to expand their menus; it opens up possibilities for home-delivery through a growing number of online services. It’s a plan born of a communal impulse, wrapped in a truly organic growth model. Says Sterling: “This is our attempt at adapting. Because right now, it’s adapt to survive.”

The Commissary Kitchen is slated to open its doors on November 1 with Foo and Accio Kitchen as the anchor tenants.

Pictured: PATRICK LYNCH AND STERLING GRICE AT THE COMMISSARY KITCHEN

The article on L’Apéro in the May|June issue should have stated Chef Andrea Maiolo staged at The Courtney Room and Zambri’s and that he held the ...
Read More
May|June issue on the stands. Read ...
Read More
Eat’s Wine Chain- La Frenz winemaker Jeff Martin passes the glass to Jeff Del Nin at Church and State Wines    Quick Stats: Born and raised ...
Read More