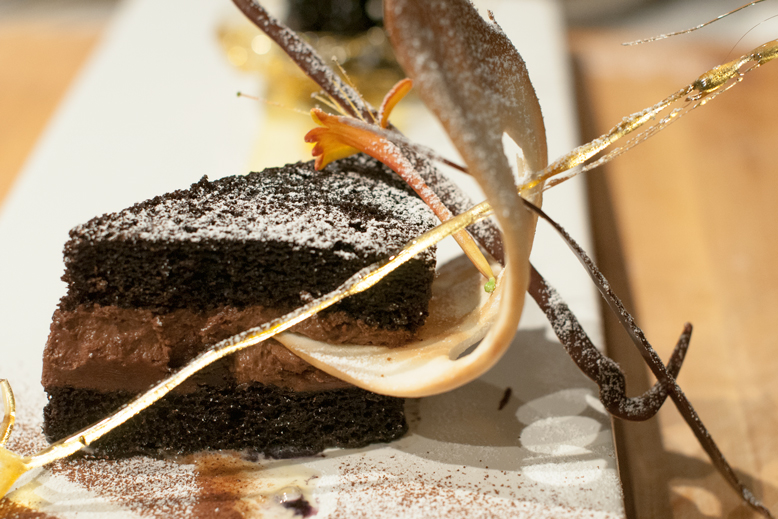 This week the course took a different turn; instead of focusing on the food or the ingredients, we took a look at how to plate the dishes. David Mincey (formerly of Camille’s and now with Preservation Chocolates and Circle Canning) took us through plating a few courses which could be served at a dinner party, but would be just at home in a restaurant. He stressed the importance of compartmentalizing each component of a dish when plating—this makes it visually appealing and will generally use smaller portions, which is important when having a dinner party. David says “you should never offer seconds of the first, the second, or even the third course because by the time the dessert comes everyone has stuffed themselves”.

Working on a small table at the center of the half circle of participants, he created three or four different ways to plate the same dish. With so many variations to each plate, the pictures explain it better (hey, a picture is worth a thousand words), so enjoy the photos of different plating styles.

Here David did a soup three different ways. First, he did a standard style soup plating. Using a mold he put his salad in the center, then he ladled a small portion of soup around it. He then added creme fraiche to the edge. For the second dish he put the soup into a tea cup, thus reducing the portion size and compartmentalizing the soup. He placed the salad on a spoon next to it so that the person eating it could decide to put it in the soup or not. For the last he made a savory baked parmesan cheese cookie to place on top of the tea cup with some salad on the cookie.


Clockwise from top left: David hollows out a tomato and uses the shell as a salad bowl. David wraps the salad with pieces of cut and softened rice paper. Then, he cut a cucumber, sliced very thin, and wrapped the salad with it. To finish a garlic scape is coiled around the wrapped salad. Also note the flash fried noodles on top to add some crunch to the salad without interrupting the flavors. 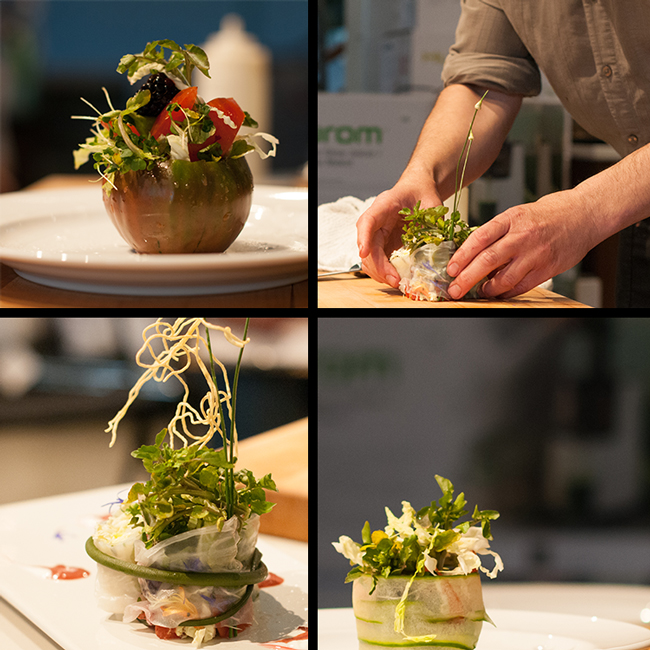 Here we see two different ways to plate a main course. On the left is a long, square type dish. When using this kind of dish David says it is best to distance each part of the dish to make it more appetizing. Also odd numbers of things tend to look better than even. This is why the dish has 3 parts: in the middle is the meat/protein, in the foreground vegetables, in the background is the side. The right picture uses a rounded, deep dish. When using a dish like this it is best to keep things centered so that they don’t run up the side of the plate. Plating your items parallel can make the portion look bigger than it is, a good tip for dinner parties if you find yourself running short on supplies. 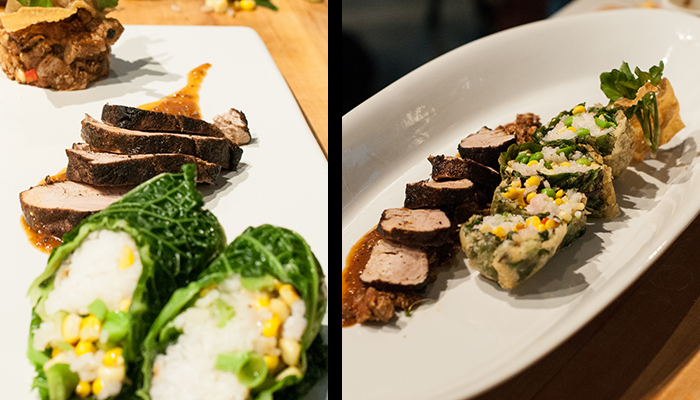 Here we have a simple, but quick way of presenting a piece of cake. A bit of creme fraiche is spread over the bottom of the plate, then lines of chocolate sauce are drawn on. Next take a wooden skewer and draw through the lines to make a interesting pattern. Finish with some sauce that has been applied to a plate and cooled in the fridge so it hardens.

Dusting your dessert with icing sugar or cocoa powder can make the cake really “pop.” Also laying down a a pice of cutlery (in this case a fork) before you sprinkle can create a interesting effect when you take it off he plate. 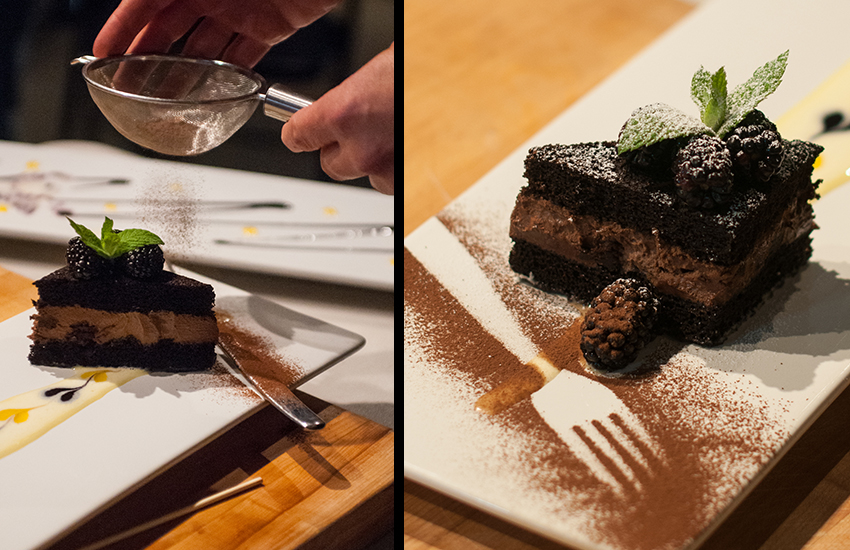 Here we have a combination of plating techniques. Note how the creme fraiche ties the two ends of the plate together, without it the plate looks too long for just a cake and some berries. On the cake there is a soft, malleable cookie holding up a sugar spear, cinnamon roll and a flower. On the other end of the plate is a pulled sugar basket filled with blackberries. In the creme fraiche sauce he placed dollops of blackberry and lemon sauces and formed them into hearts.

November | December issue on the stands. Read ...
Read More
For the ninth year in a row Rancho Vignola is setting up its Vancouver Island Harvest Sale here at the Mary Winspear Center in Sidney. Many of ...
Read More
Season’s Greetings EAT readers! We at EAT are looking forward to all the wonderful seasonal baking on offer around the city. One of the great joys ...
Read More
Masterclass Candied Citrus Holiday ...
Read More
The Strathcona Hotel pretty much offers a little something for everybody under one roof.  There is a family restaurant, a blues bar, a nightclub, ...
Read More