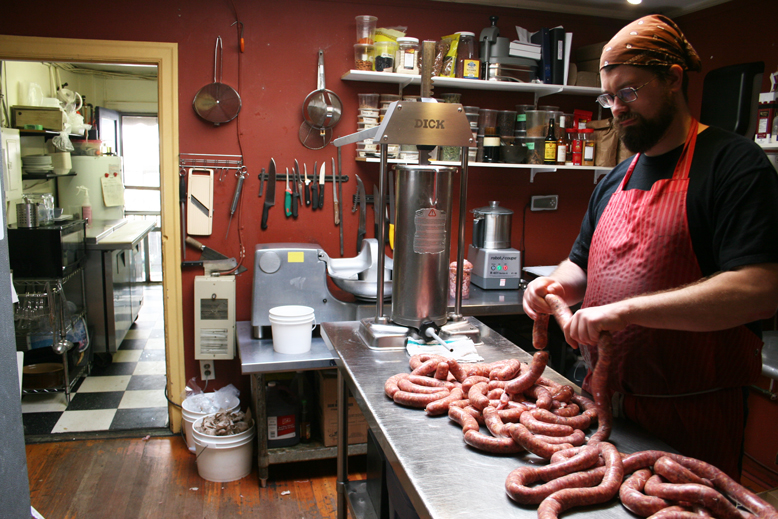 Choux Choux Charcuterie changed hands in 2019 and is now Bull and Sons Delicatessen.

When I go in to see Paul at Choux Choux, he is in the back kitchen turning out sausages on a hand-operated grinder. Choux Choux still makes and smokes all their meats in-house, only ever making as much as they plan to sell in a week. Salami, pepperoni, ham, bacon, and beef brisket all go up onto the hooks of the smoker out back. I ask Paul how things have changed since he took charge of the kitchen two years ago.

The main thing, he says, is that the quality is the same. The quality is in fact better now as there is a big shift at Choux Choux towards using local animals that were raised happily. Choux Choux focuses on ethical and hormone-free products, while maintaining the same standard that customers have come to expect over the years. The cured meats compliment the wide selection of cheeses (which I discussed here). In addition, Choux Choux is famous for its lunchtime fare (see). 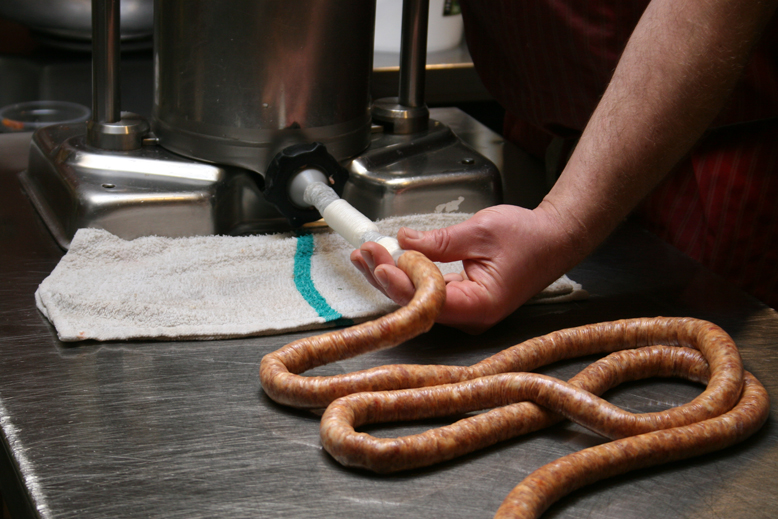 Because Paul formerly worked at Ulla, as well as other restaurant kitchens, I ask him how he likes the idea of working in a deli kitchen where he can make his own hours and work on his own. In a way, he tells me, it is nice to have the space and time to get everything done without the crazy rush and drama of a restaurant. He likes that he can come in and play his own music. He likes that he can have time away from work to explore other cultural events in the city. On the other hand, a busy kitchen is also an extremely creative space where a lot of ideas and recipes can fly about (depending on the philosophy of the restaurant). 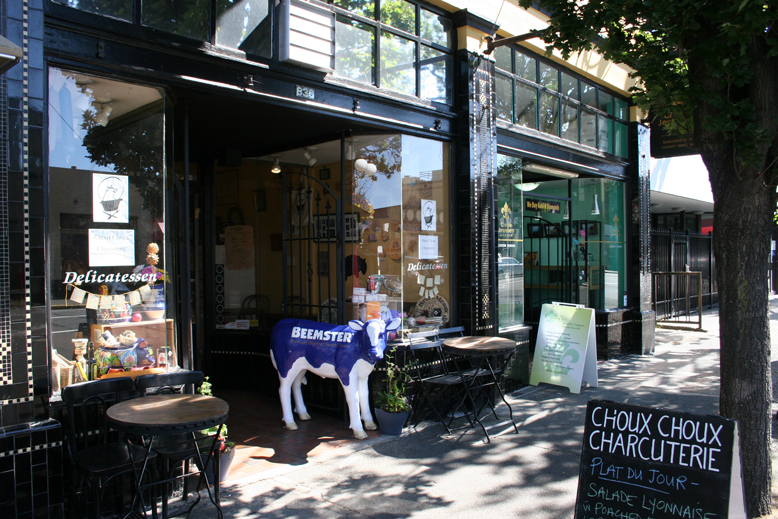 We also discuss his philosophy of the old kitchen, versus the new kitchen. Nowadays, people who make sausages try to be very precise about the way that they cure meat. The ingredients are measured in percentages of nitrate and salt. The temperature of the smoker is controlled. The product can be made consistent. In old kitchens, the masters used to cook and add things by feeling. The results can be delicious, but they are also hard to teach in a short space of time. It is difficult to get great results without years of practice. Choux Choux seems to be striking a balance between the modern and the traditional, as far as I am able to ascertain.

A marvelous thing about Choux Choux is it’s informal and old-world charm. There is a trend these days towards what we might call Portlandization; this is to say adding many big wood beams to the room, or a trend toward a lot of white paint and stainless steel. Places with old world class are going to survive these fashion blips and move on with tasteful dependability. Choux Choux is a great, and truly appreciated, deli here in Victoria.

The article on L’Apéro in the May|June issue should have stated Chef Andrea Maiolo staged at The Courtney Room and Zambri’s and that he held the ...
Read More
May|June issue on the stands. Read ...
Read More
THE EAT MARKETPLACE Introducing: Brasserie L’Ecole Unpretentious French food from Quality ingredients at a great price A classic French Bistro ...
Read More