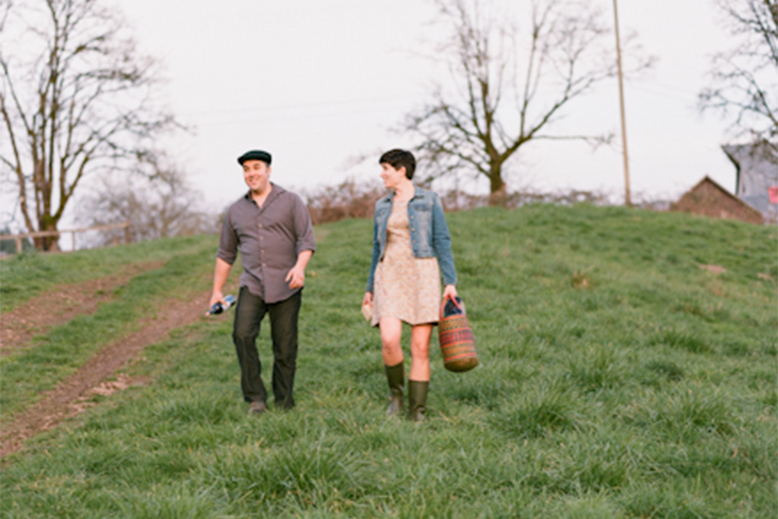 Ah, the life of a cheese farmer; waking up with the rooster and the rising sun, tending to the animals and gathering milk, and finally whipping up a batch of cheese with enough time left to sit and enjoy the view. Sounds pleasant, doesn’t it? If only it were so picturesque. For every drop of milk, there is something to clean. For every wheel of cheese, there are weeks (or months) of after care. For every loving cow lick or cuddle, there is a paddy to scoop. 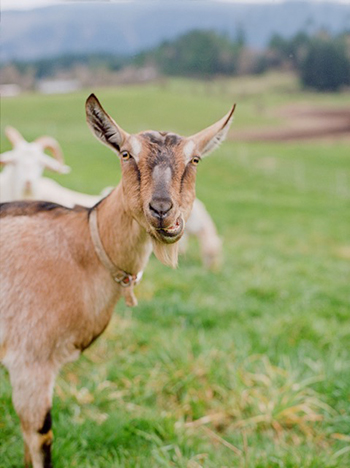 Falling in line with the rest of the culinary industry, life as a cheese maker can often be glamorized as something much more cushy than it is. Yet it is through this allure that some of the best cheesemakers are drawn to the industry.. It seems that a lot of cheese farmers have switched paths in life; overwhelmed by the noise and energy of modern times, they retreat to the country to live a simple, enriching life.

For cheese farmers Kirsten Thorarinson and Cory Spencer at The Happy Goat in Duncan, making their dream come true is worth the long hours. A typical day on the farm is a full 12-hour shift for the couple, with everything from milking, to cheese making, to administrative work. But as Kirsten says, “Living and working where we do (is the greatest reward). It’s beautiful out here. We never take that for granted.”

The pair was living in a Vancouver apartment when Cory took a cheese-making course and became hooked on cheese. He spent some time apprenticing around BC and Europe, and enrolled in the University of British Columbia’s Farming program before they made the move. Finally in 2010 they left the big city for a seven-acre parcel in rural Duncan; even then it took them almost two years before the plant was licensed for production. They have found that one of the best tools for bringing their dream to fruition has been patience. “There aren’t a lot of resources on how to start your own cheese plant, so some of the equipment and plant design we started off with isn’t ideal but we have made it work. We are still learning things every day, and I’m sure it will be that way for a long time to come.” 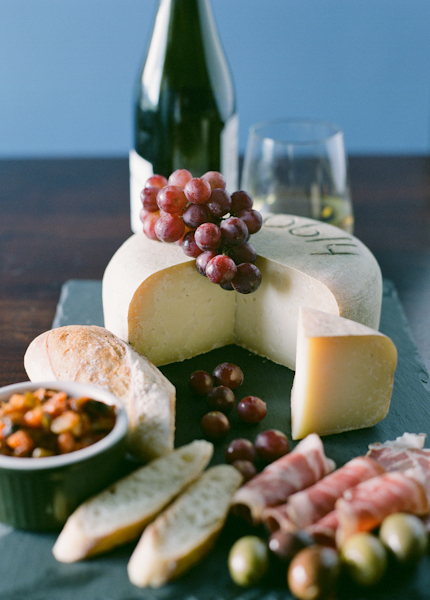 Making the cheese is just half the battle; many cheeses have a short shelf life and quickly need to find stomachs to fill. But in a land of cheap cheddars it can be hard to convince consumers to spend up to 5 times more on their cheese fix. That being said, the appetite for fine cheese has been growing in Canada, and more people are becoming intrigued by local operations. Even in global markets Canadian cheeses are stirring up some serious interest; in the 2013 Global Cheese Awards, an Ontario cheese (aged Lankaaster) won the title of Supreme Global Champion.

Lori Palmiere with the Dairy Farmers of Canada is a diehard Canadian cheese lover (and past maker) and holds an optimistic view on the future of our farmers, “I have seen our market open up considerably in the last 15 years and it will continue this trend. Canadians are loyal to the Canadian farmer (in a recent poll 89% of Canadians said they wanted their milk or milk products made from 100% Canadian milk) and will show their continued support by buying as local as they possibly can. Look at the surge in growth of farmers markets and also the small producer increase in Western Canadian municipalities alone. Supply and demand at its finest!”

The next time you taste a morsel of cheese at a local market, remember that it is so much more than just cheese. It is a story, with love, character and meaning. Whether it is from the valleys of the Okanagan or the coastal islands of Quebec, our cheese farmers are representing all Canadians as we forge our way into the International cheese race.

For the ninth year in a row Rancho Vignola is setting up its Vancouver Island Harvest Sale here at the Mary Winspear Center in Sidney. Many of ...
Read More
Season’s Greetings EAT readers! We at EAT are looking forward to all the wonderful seasonal baking on offer around the city. One of the great joys ...
Read More
Masterclass Candied Citrus Holiday ...
Read More
November | December issue on the stands. Read ...
Read More
The federal government is rushing through sweeping changes to Canada’s environmental laws. Significant changes to the Fisheries Act are tucked ...
Read More