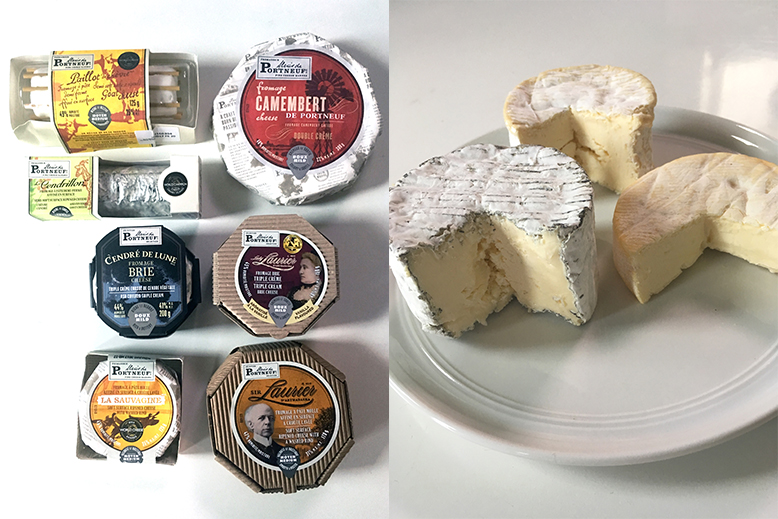 From time to time we receive product samples at the EAT office. Most of time we don’t write about them unless it’s something readers would be interested in and worth letting you know about.

This week a large, insulated box arrived at the door by courier. Inside was a selection of cheeses from the Quebec-based cheese maker Alexis de Portneuf. We sat down, opened a box of crackers, cracked a few beers and tasted the cheeses.

Alexis de Portneuf traces it roots back to 1842 when Alexis Cayer and his wife, Jane Skinner settled in the village of Saint Raymond-de-Portneuf. Over time the family became cheese makers. The cheeses are all hand-crafted in Saint Raymond.

A press release was included with the cheeses that directed us to their website. Their portfolio includes 46 different cheeses ranging from brie and camembert to goat cheeses to firm cheeses – many of which are available in BC.

The company has gone out of its way to make choosing a cheese that you will like easy. First the packaging is designed to tell you clearly what to expect from the cheese inside. It breaks it down by describing a cheese by intensity (mild, medium, strong), texture (rich, firm, creamy) and flavour (rustic, robust zesty). There is also a section on the website that suggests recipes that pair a specific cheese to the recipe. i.e.  Zucchini Rice with Lady Laurier (a mild, tripe creme brie that’s rich and creamy).

Here’s a selection of Alexis de Portneuf cheeses available in BC through Save On Food, Whole Foods, IGA, & Sobey’s.

To introduce the new taste guides, Alexis de Portneuf is inviting all cheese lovers to visit contest.alexisdeportneuf.com and participate to a unique contest (starting February 12). By answering just a few simple questions they can discover their personal taste profile and get a chance to win one of 5 valuable travel certificates.

For the ninth year in a row Rancho Vignola is setting up its Vancouver Island Harvest Sale here at the Mary Winspear Center in Sidney. Many of ...
Read More
Season’s Greetings EAT readers! We at EAT are looking forward to all the wonderful seasonal baking on offer around the city. One of the great joys ...
Read More
Masterclass Candied Citrus Holiday ...
Read More
November | December issue on the stands. Read ...
Read More
There were few bar mitzvah brunches in Vancouver that didn’t feature a fresh crop of bagels. Their twisty, chewy, bready platforms bore liberal ...
Read More