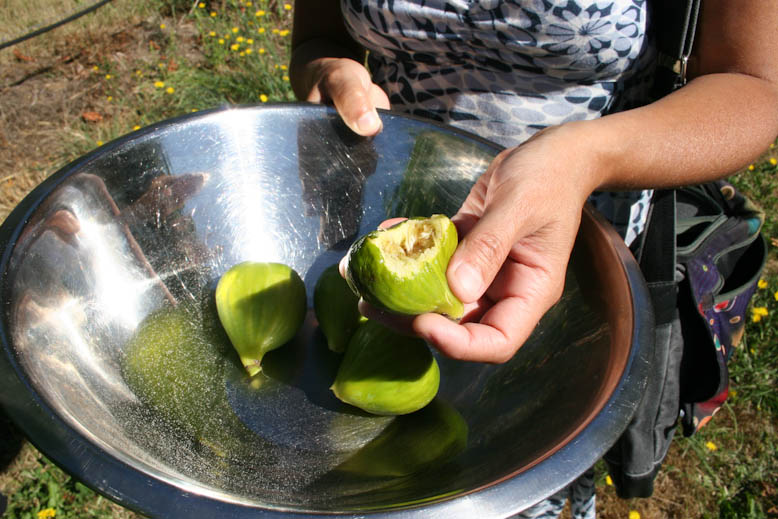 We went early on a Sunday morning to visit Chef Fatima de Silva at the Vinoteca on the Vigneti Zanatta Winery’s estates.  She was alone in the kitchen, the first to arrive, proofing the bread and puttering about as she prepared for the influx of lunch seekers.  By way of an interview, we sat down with coffee, then walked around the winery’s orchard, collecting fresh fruit from the trees.  Everything picked goes directly into the meals an hour later.

No, she didn’t want to be on camera, she announced.  We should take pictures of the fresh figs instead.  Zanatta is in a unique temperate zone where it is just warm enough to sustain hot climate fruits like figs, but still cool enough to produce excellent apples, pears, and peaches.  Beyond this, of course, are the many varieties of grapes that grow on the property.  The land was one of the original BC winery projects in the early part of the last century, and grapes have been grown there ever since (thought the farm had a small turn as a dairy producer somewhere along the way). 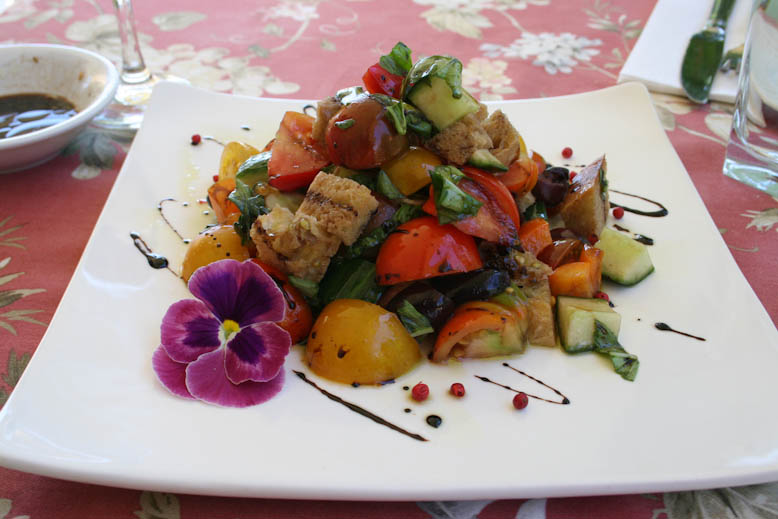 I asked Fatima how she came to be a chef there and she tells me it wasn’t so difficult.  “What is Italian food, anyhow?”  she says. “It’s just Portuguese food with basil and parmesan in it.”  Despite her facetious humour, Fatima knows exactly what she is doing.  As we sat down again to talk, the restaurant was coming to life, other staff members were arriving and, even without turning around, she knew where everybody was.  She chimed out instructions between her stories, and still felt comfortable taking her time with us.  In her element, Fatima and her humour and hospitality fill up the space she occupies.

While she spoke about life at the winery, she requested that a young man named “Todd” go out and gather more bounty from the kitchen garden.  “He’s not really named Todd,” she joked, “we just call him that because he always seemed like a Todd.  Now even his parents call him that!”  At a certain point, Fatima vanished into the kitchen and began to cook.  Flowers, cutlery, and glasses were appearing on the tables.  The first customers were beginning to mill about in the garden. 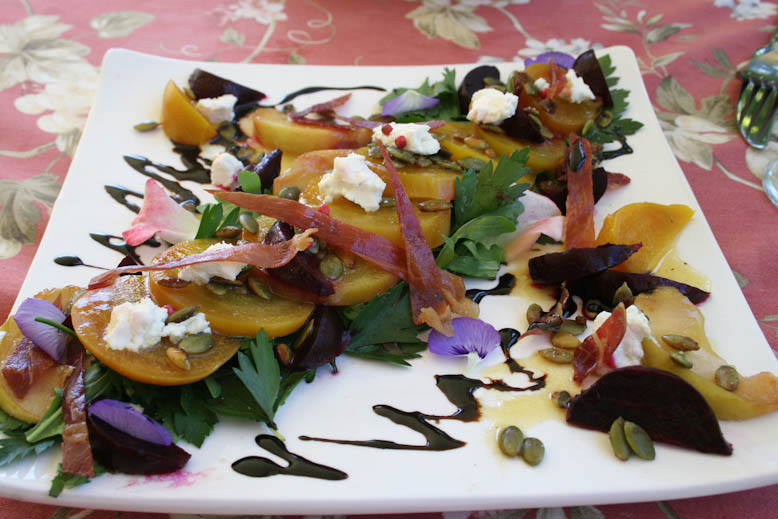 As we commenced the meal and a wine tasting, and the talent of the chef was evident.  Fatima has organised the menu in such a way that she can prepare a luncheon for 70 people almost by herself.  The dishes are simple, but the freshness and balance makes them extremely satisfying.

We began with a salad of grilled bread, fresh from the oven, chopped tomatoes, cucumber, sweet pepper, olives, and basil, mixed with olive oil and drizzled with a balsamic reduction.  All but the olives, of course, were fresh from the garden.  This salad was paired with Zanatta’s Glenora Fantasia Brut, a sparkling wine made slightly tart by the hint of green apples.

Next, we had a second salad, this time with golden and red beets, chevre, prosciutto, lightly stewed apple, and pumpkin seeds; again served in a simple vinaigrette.  The light dressing allowed the freshness of the vegetables to shine through.  This dish was paired with Zanatta’s Brut Tradizionale, which (as its name implies) is a lovely traditional champagne with a slight pinkish hue.

Finally (because we were getting quite full by this point), we were served a linguini in cream sauce with spot prawns and mussels in their shells, paired with the winery’s Damasco; a well-known blended white with a slight hint of bubble to it.  This last dish was so fine that I began eating it before I even remembered that this was an assignment, and ought to take a photograph.

On the way out, we stopped in the winery’s store and tasting room to sample a few other things and to pick up some bottles.  Diane Coutts, Zanatta’s sommelier-in-training, guided us through a few of the winery’s whites and reds.  I took home a bottle of merlot, but I plan to return in a couple of months when the sparkling red, the Taglio Rosso, is available. 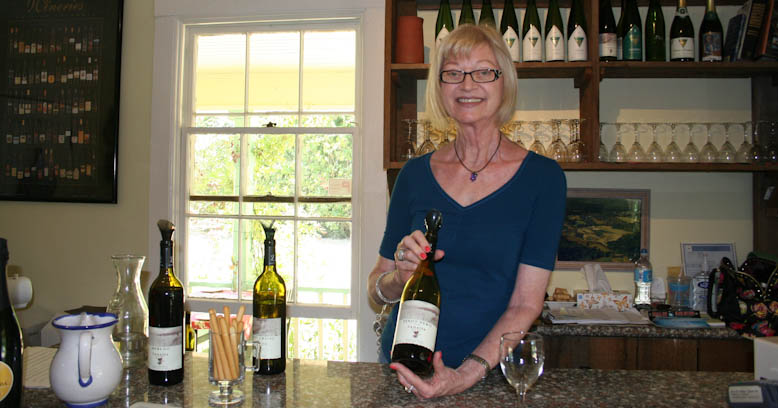 The article on L’Apéro in the May|June issue should have stated Chef Andrea Maiolo staged at The Courtney Room and Zambri’s and that he held the ...
Read More
May|June issue on the stands. Read ...
Read More
“Salmon is the lifeblood of coastal ecosystems, providing food for people, bears, and birds, and fertilizer for the forests. That’s a ...
Read More