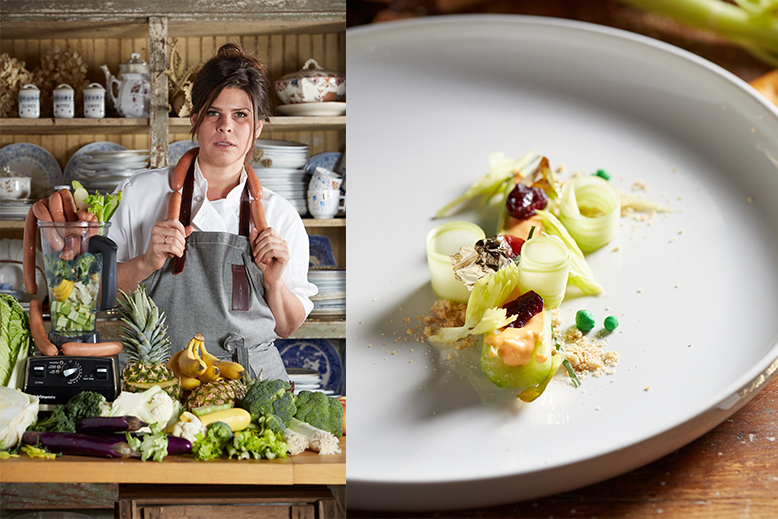 If you do an Internet search for Christine Flynn pre 2016 you would learn that she is the Executive Chef at iQ Food Co. in Toronto. You would also note that she is featured heavily on the “Top Christine Flynn Profiles” on LinkedIn. Just for fun run the experiment yourself. Got it? Now just type “Christine Flynn”…Escalated quickly, didn’t it?

Yes, Christine Flynn is Chef Jacques La Merde – the Instagram phenomenon, who rose to fame over the past year, garnering over 125k followers. La Merde, the slightly hysterical, all-caps-brandishing, bro-centric chef, plated stunning dishes of haute-junk-food cuisine from a selection of the finest ingredients 7-Eleven has to offer and blasted them all over the Internet. The identity of La Merde was hotly contested and when Flynn outed herself on Bravo’s Top Chef this past January the Internet erupted with commentary. She told Eat Magazine, in advance of her appearance at the Terroir Symposium in Toronto on April 25, that the response was “mostly positive…there have been a few people who have gotten annoyed, but the whole point of satire is that it starts a dialogue.”

The rouse was a creative outlet for Flynn in the highly competitive, often over-the-top world fine dining. “I just thought it would be funny to combine the two opposite ends of the spectrum: Super fine dining plates with gas station snacks… it was just a fun way to be creative and blow off some steam.” Flynn didn’t have an extensive creative process for putting together the plates. “I go to a gas station and see what looks weird. Then I bring everything back to my apartment and spend about 5 minutes knocking together a plate.” PowerAde gel? Definitely. Dunk-A-Roos? Fair game. Spam? How could you not?

But Flynn is much more than an Internet phenomenon. She is a veteran food advocate and an industry front-runner for menu creation, and restaurant and event management. She has strong family ties and credits her time at the dinner table to her success. “My parents made a choice early on that we would sit down together as a family each night for dinner…I learned a lot of what I know about food by sitting at our table and eating whatever was set down in front of me”. Her mother, who went back to do a PhD at the age of 55, also influenced her style of practice “She taught me that you should always read and to do your best to listen to what other people have to say. This has helped me to be humble and to stay curious, which I think are both important qualities in a cook.”

Christine Flynn may have made a name for herself through the wildly fun persona of Jacques La Merde but Flynn, as a chef, can certainly stand on her own.

Jacques La Merde will be speaking at Terroir Symposium, which takes place in Toronto on April 25.

Terroir Hospitality brings together innovative and creative influencers from the field of hospitality, including chefs, food and beverage experts, writers and businessleaders. To see the full schedule and to buy tickets visit http://www.terroirsymposium.com

July|August issue on the stands. Read ...
Read More
It’s a busy week in Victoria – on Saturday you could head downtown and hit the Farmer’s Market, attend the Tea Festival followed by Seedy ...
Read More