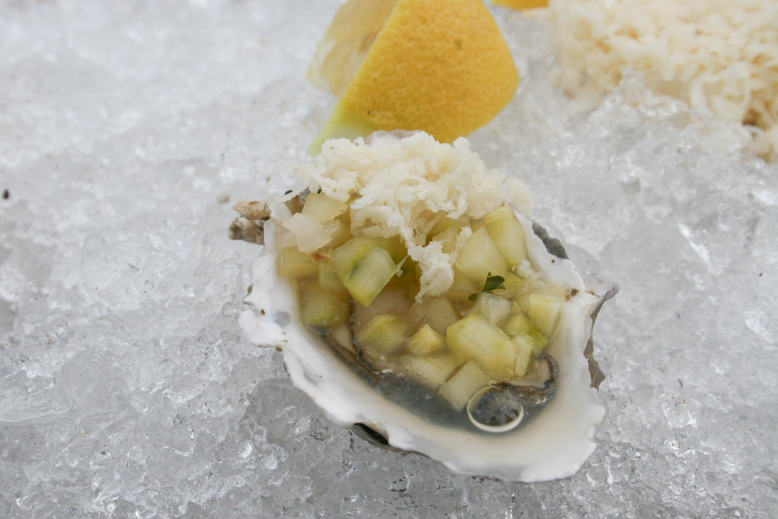 One of the more enjoyable assignments I’ve taken lately was going up to Oak Bay to shuck oysters on the beach with Jess Taylor of The Wandering Mollusk Catering Company. While we sat and build up a small mountain of empty shells between ourselves and a number of curious German tourists who happened by, Taylor told me his own history and the history of oysters on Vancouver Island. Taylor began his oyster catering company here in Victoria six months ago, in response to the fact that the oyster is vastly underrepresented as a natural resource here on the Island. Certainly, people think of the East Coast; Nantucket, for example, when thinking of tourist oyster spots, but there are high quality oysters to be had here on the island. The reason that the oyster has such a low profile right now, according to Taylor, is that the oysters that were once indigenous to and plentiful on the island, the Olympia, were nearly wiped out at the beginning of the 20th century. Presently the bulk of the oysters found on Vancouver Islands are descended from types brought over from Japan. There are, however, concerted efforts to bring back the Olympia, which you can read about here. It’s quite an interesting history. 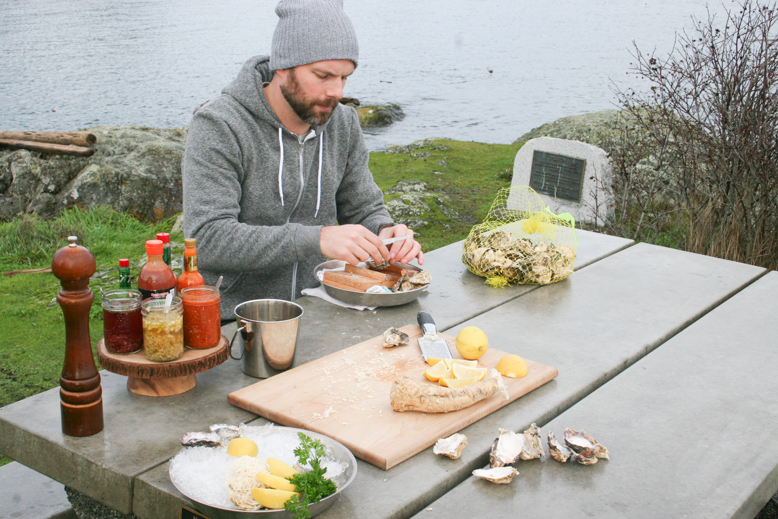 Taylor caters oyster events for parties and functions. He sets up at the site and then shucks oysters all night, combining them with traditional and homemade sauces. Nobody sits on the fence when it comes to oysters at a party, he explains. Some people will absolutely love them, and others will be horrified by the entire process, but the fact is that the oyster will dominate every conversation at the party. The ritual of the oyster is fascinating to watch and discover. Taylor tells me that there is no reason why oysters can’t one day compete with salmon (or spot prawns, I supposed) as an Island delicacy that specifically brings people to Victoria. To this end, he describes to me a number of things people ought to know about the oyster that will broaden its possibilities on the palette. For example, both scotch and Guinness pair excellently with oysters. Prosecco is another natural fit for the oyster. A popular and traditional sauce for the oyster is tabasco and lemon, but at Oak Bay we tried a number of other great sauces that Taylor had made from scratch and that he provides when catering a party. The shallot, with red wine vinegar, pepper, and parsley provided a fine counter point to the salty flavour of the oyster. The green Thai sauce was also excellent. Taylor asked that I include this recipe for his Cucumber Ginger Mignonette, so that people could try it at home.

Mix salt, sugar, rice wine in bowl until sugar dissolves. Add other ingredients and finish with soy to taste. Let sit in the fridge for a couple hours to infuse flavour. Serve with raw oysters and enjoy.

While there are some large scale oyster producers on the Island, Taylor prefers to work with small, local suppliers. I have provided their contact information below, so that you can investigate their products yourselves. In addition, if you’d like to meet Taylor, and learn more about The Wandering Mollusk Catering, he will be at the Culinaire Victoria Festival this year. It will be a good chance to go and try some oysters…and a million other amazing things.

The article on L’Apéro in the May|June issue should have stated Chef Andrea Maiolo staged at The Courtney Room and Zambri’s and that he held the ...
Read More
May|June issue on the stands. Read ...
Read More
I love sherry. Ancient, lengthy, site-specific, traditional, rare, haunting, lingering, unique. What’s not to like? People complain that it’s too ...
Read More