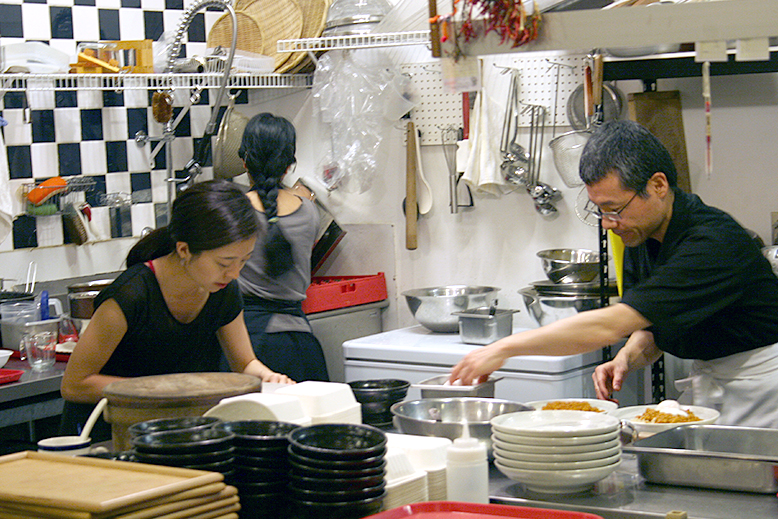 Uchida is an interesting place. For one thing, it is only open for three hours a day, so if you want to eat there, you have to be pretty organized. Chef and owner, Yasu, and I sat down and had a chat the other day. One of our topics of conversation was the nature of Japanese food itself. Yasu tells me that, as a child, he and his family never went out once to eat sushi. Sushi is very expensive in Japan. Uchida offers up fare that is a closer reflection of the kind of things that Japanese people eat on a regular basis.

This is not to say that the food is purely Japanese. We talked to some degree about hybridity, and the idea that while the recipes and the templates are Japanese in conception, the ingredients are local, and the dishes evolve to suit the tastes of the diners. There are not very many Japanese people in Victoria. Yasu figures that while there may be forty or places that serve Japanese food, there are probably less than five that are actually run by people from Japan. Thus, when Japanese people eat at those places they don’t feel like they are eating their own food.

I tell Yasu about the disappointment I felt when eating at an absolutely awful pancake house in India. I wonder how Japanese people feel when they come to his restaurant. The food is wonderful to me, but I wonder how insiders like it. The answer is complex; probably irrelevant. I’m just curious to know how things evolve when they manifest themselves in new places. The restaurant is full of Japanese people at lunchtime and they are all looking content. That is probably the best answer.

Japan is a diverse country, Yasu, goes on to say. A person can travel 100 kilometres from home and encounter completely unfamiliar dishes. There will be types of vegetable never before seen growing a few miles from home. I ask if Uchida represented the food of a particular region and Yasu demurs. His dishes are popular all over Japan, he says. I like that the man is at once full of information and yet coy. Our conversation is a little like a dance.

Yasu in the kitchen is engaging to watch. He approaches each task with great focus, and tries to balance the speed with which the dishes come out and the delicate presentation of each. He gives each plate his absolute attention for a specific number of seconds, and will not be distracted while he works. I ask him about his technique and he denies everything.

I opt for daily special: queema curry, which is chicken and spices on brown rice, served with a salad called shira ae. Everything possible is fresh and organic. Many of the vegetables come from the Umi Nami Farm in Metchosin [http://uminamifarm.com/], where they specialize in organically growing Japanese vegetables.

Halfway through this meal, Yasu comes out and offers me a special off-menu item: sea-cucumber marinated in pickled daikon, green onion, and soy sauce. It’s funny, he tells me, that there are so many sea-cucumber here, and so many giant clams, but nobody in Canada wants to eat this kind of stuff. There is no distribution network. The regulations are too much of a pain. I eat the sea-cucumber his friend caught for him and it is a delight.

With Phase 2 beginning, restaurants and patios, tasting rooms and coffee shops are reopening. This is an ongoing process, with many changes, so we ...
Read More
Vinegar -one of the most important discoveries in food history dating back to ancient times and used around the world by almost every nationality, ...
Read More