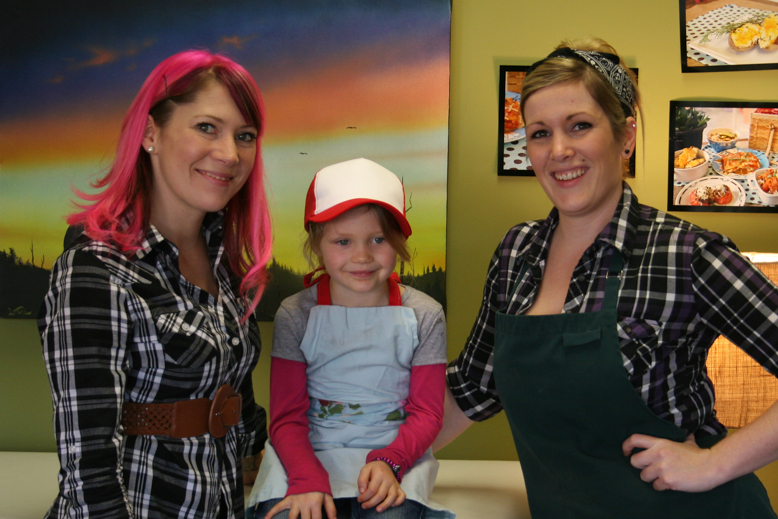 For people who have either no time, or perhaps no inclination to cook elaborate meals every day, the solution has long been what was endearingly referred to as the TV dinner.  The problem with TV dinners, though, was that they were always teetering between the twin axes of blandness and unpalatability.  One might picture a factory someplace with woeful chickens and buckets of peas and potatoes rolling in endlessly on one conveyor belt and colourful boxes containing food indistinguishable from the packaging rolling out the other side.  It doesn’t have to be this way, though.  I went in to visit the folks at the Apple Box and found everything I tried there to be delicious, healthy, and even locally sourced. 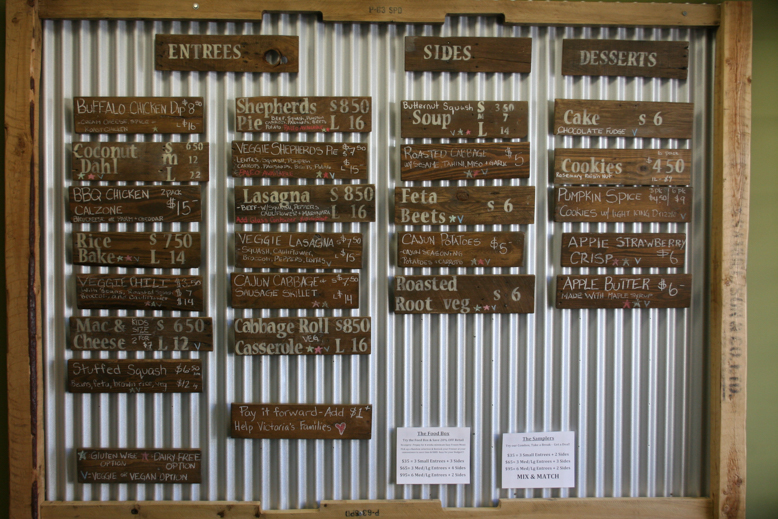 The Apple Box, located at Grant and Cook, is a fairly new venture that opened in the spring of 2014.  Christa Atherton, a mother of two, was lamenting one day that there were not enough nutritious and sensible options for people on the go and decided that the best solution was to fix the problem herself.  The Apple Box features frozen meals to-go.  Everything is cooked fresh every week, using fresh seasonal ingredients.  As much as possible, Christa tells me, they select local and organic food to use in their dishes.  She proudly explains that, despite all the business they do, they produce only a small 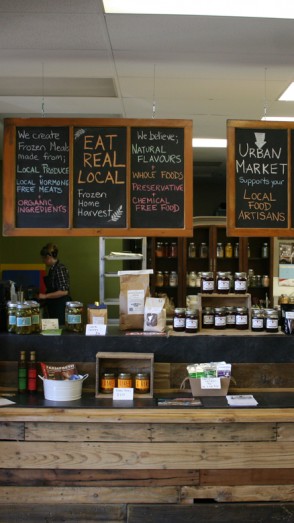 half bag of garbage every week and that all the organic waste goes to compost at an area farm.  The Apple Box is also about to receive its Green Leaf certification as a sustainable and ecologically wise business model.

At present, the main clientele consists of mothers with young children, some seniors, and some professionals.  In my opinion, the big demographic to hit is males in their 20s.  These are people who are eating out, or living on TV dinners all the time.  If they knew that they could sign up for meal plans at the Apple Box, I believe their problems would be solved (and they would make their parents proud at the same time!).  Beyond the per month meal plans offered at the Apple Box, there are also combo deals and deals on individual containers.  Apple Box gift certificates are popular, too—you parents should buy some for your pizza-addled children at UVic.

Beyond all this, it is important to note that the food at the Apple Box is tasty.  There are certain complications that arise from freezing and thawing dishes, loss of flavour being foremost among them.  This means that Apple Box’s dishes are cooked with different proportions of spice.  Science is at work.  I tried lasagna, a Shepard’s pie with squash top, roasted beets with feta cheese, chocolate cake, and pumpkin gingerbread cookies.  I liked it all.  It isn’t even reasonable to compare this food to an abominable snow-meal from the supermarket.  My advice is that if you are thinking of swinging by the supermarket to pick up an easy dinner, you ought to go to the Apple Box instead.  Or if you’re in the area, Apple Box products can also be found at Red Barn, Aubergine, and Peppers Foods.

The atmosphere, too, is friendly.  The staff has no trouble stopping to chat with clients, and to explain exactly how the system works.  The spacious kitchen and counter also offers up local pickles, jams, and other treats.  There are a wide variety of dishes to choose from and the menu changes often. Give the Apple Box a try; I think you’ll like it.

With Phase 2 beginning, restaurants and patios, tasting rooms and coffee shops are reopening. This is an ongoing process, with many changes, so we ...
Read More
PORTLAND, OREGON Chef, wineries, breweries, TV food celebrities, and food producers all came together in a full-on meeting of the mouths to cement ...
Read More