Call it the fatty Madonna of the cured meat world. Bacon is more popular than ever, its ever-expanding sphere of influence showing no sign of recession, no matter how much we sometimes might wish to forget it. It has found its way into/onto our burgers, bourbons, salts, band-aids, chocolate, lip balm, even personal lubricant (perhaps there is such a thing as loving something too much). Lucky for all of Victoria’s bacon fans, there are plenty of locations around town to source your fix (for the real thing, that is) and many varieties to choose from. From the classic marbled breakfast strips to pancetta and gammon, there’s never been a better time to be buddy buddy with a butcher. Here are some highlights from local producers.

Besides their reputation as one of the best places for cured meat in the city, The Whole Beast has found a way to make their products look fantastic on display too. It’s hard to merchandise large slabs of meat in an aesthetically appealing way, but these guys have done it. Their revolving list of bacon-related products includes: Maple Rosemary Bacon, Soy & Five Spice Bacon, Buckboard Bacon (savoury, hot smoked), Smoked Guanciale (made from the jowl), Smoked Pancetta, and Double Smoke Bacon.

After Choux Choux receives their pig order every Friday from Qualicum’s Sloping Hill Farm, they butcher it in-house and make a variety of products, bacon included. They currently offer Side Bacon (dry cured and smoked), Gammon Bacon (belly with loin attached, wet brined, then smoked), Pancetta (Italian-style bacon which is cured and rolled, but not smoked), and Ventrèche (Essentially, pancetta that is cured flat instead of rolled, very fatty and ideal for starting a sauté or soup base).

Now with four locations around Victoria, The Red Barn maintains its reputation as a local staple for quality and convenience. Red Barn house smokes its own Back Bacon, Beef Bacon, Turkey Bacon, Smoked Bacon, and Mini Hams.

With the recent launch of their Beacon Avenue location, Sidney dwellers will no longer have to endure the drive into town for their bacon fix. Orr’s offers several bacons, including Ayrshire Bacon, Wiltshire Bacon, Canadian Side Bacon (streaky breakfast style), Canadian Back Bacon, and Smoked Ham. 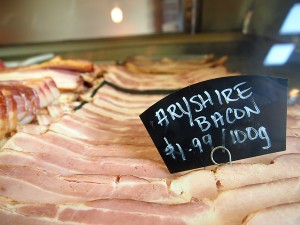 This third generation family-run business has been serving Victoria residents since 1952. A supplier to many stores and restaurants across the city (including The Village Butcher on Oak Bay Avenue), Glenwood’s butchery is located on Park Dale Drive beside Glen Lake. Bacons cured and smoked on site include: Sliced Side Bacon, Shoulder Bacon, Back Bacon, Smoked Jowls, Beef Bacon (available in Regular or Lean), and Ayrshire Bacon.

DRY CURED: Meat is rubbed with salt and spices; aged, then may be smoked or not smoked.

WET CURED: Meat is brined in a salty solution; smoked.

SIDE BACON: also known as “streaky bacon”, this is the typical strip-cut most people picture when they think of bacon. The meat comes from the pork belly.

SHOULDER BACON: made from shoulder meat.

BACK BACON: also known as “Canadian bacon”, comes from the loin in the centre of the pig’s back. It is much leaner than side bacon, and has a texture similar to ham.

HOCK: from the pig’s front leg or shoulder.

GAMMON: from the hind quarters or back legs.

PANCETTA: like side bacon, pancetta is made from pork belly meat, only dry-cured and typically rolled tightly before slicing (hence the round shape). Usually not smoked.

VENTRECHE: see pancetta; ventreche might be rolled just like pancetta, or be sold flat. It’s very fatty, ideal for starting sautés or a base for sauce.

GUANCIALE: an Italian style of dry-curing meat from the hock.

AYRSHIRE: a Scottish variety; traditionally made only from Great White premium-grade pigs. The meat is wet-cured and mildly seasoned.

WILTSHIRE: a wet-curing style that originated in Wiltshire County, England.

With Phase 2 beginning, restaurants and patios, tasting rooms and coffee shops are reopening. This is an ongoing process, with many changes, so we ...
Read More
Every once in a while, I feel like getting crafty. This usually occurs when the weather turns cold, and often has something to do with food.  In the ...
Read More