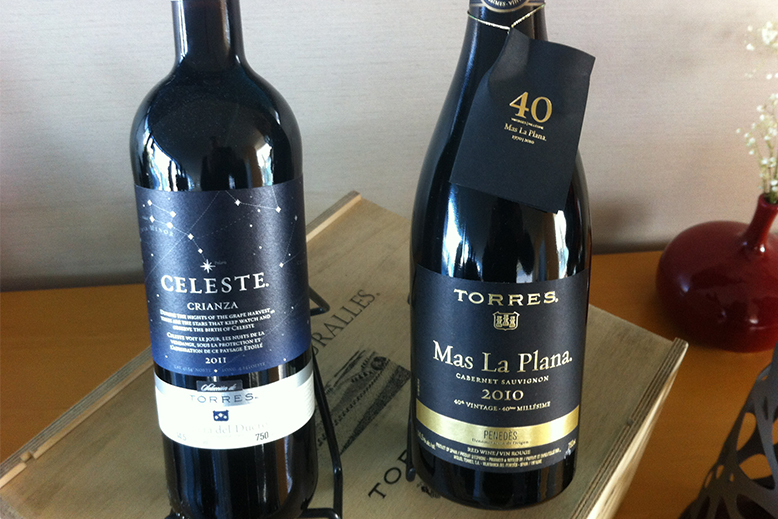 On a sixth-floor penthouse suite at the Inn at Laurel Point, the view is magnificent. Floatplanes land and takeoff, the Coho sails out towards Port Angeles and stiff winds send ripples across the harbor. We’re gathered to hear Miguel Torres speak about his family’s Spanish winery, Bodegas Torres. Miguel, fit, fortyish, chill and the son of CEO and President Miguel A. Torres, strides into the room, and takes up a position in front of the collection of bottles waiting to be poured and tasted. Miguel, the younger, is dedicated family man (he married a Baptist girl from the ‘States. Long story her fathered learned to love wine because of Miguel and eventually started his own wine cellar.) 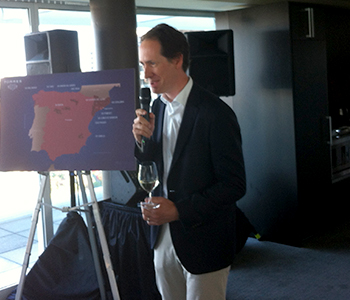 “If you want good wine buy it from a family winery”, say Torres. Our family’s name stands behind the wine. Our reputation is based on the quality of our wines.”

Tonight about two dozen wine aficionados will taste six wines and one brandy from Torres. The wines range from an inexpensive Muscat from the winery’s Chilean vineyards to the flagship (and over $50) Mas La Plana which is 100% Cabernet Sauvignon grown in the Penedès region of Catalonia. Worldwide Torres has 2,000 acres in cultivation and ships wine all over the globe from China to the Americas to Nigeria.

Each wine will be paired with a dish from Aura’s Executive Chef Takashi Ito. We start with a spoonful of organic cherry tomatoes that need little adornment other than a little goat cheese and a drop of soya and goes surprisingly well with the Muscat. In Chile, this tomato/muscat pairing is considered symbiotic. And it is. 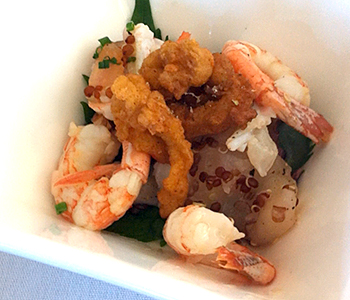 Next, is one of the hit wines of the evening at our table, Pazo Das Bruxas 2013. It’s a 100% Albarino white wine from the rainy, northwest coastal Galicia region of Spain. Since there’s a lot less heat here the wines tend to be fresh with distinctive green apple, lemon, and hay. Chef Ito was bang on by pairing it with a ceviche of various seafood – side-tripe shrimp, scallops, octopus, crab and a fritter of squid – all finished with a dusting of lime salt. I woke this morning wanting another bowlful, it was that good.

On to the reds. 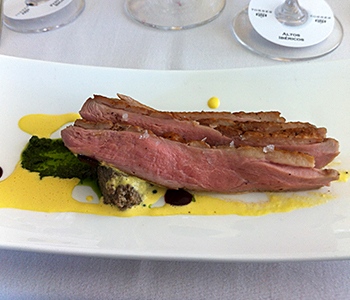 We taste a Garnacha (5G 2013) and a Tempranillo (Altos Ibericos 2012). The first is full of fresh strawberry and framboise. It’s not a wine to age but to drink up while it’s fresh. The tempranillo is a Rioja. According to Miguel, the beauty of Rioja is that it can be drunk young or kept for years. This one is only a few years old, but it has seen a mix of French and American oak and gives off intense blackberry, blueberry, toast, and spice. At $16.95 (+tax) it’s a great value wine. Both wines were matched to Chef’s rare duck breast, Portobello mushroom paté, orange pepper rouille, cherry gastrique and chimichurri sauce. Our table gave the edge to the Tempranillo as the better pairing. 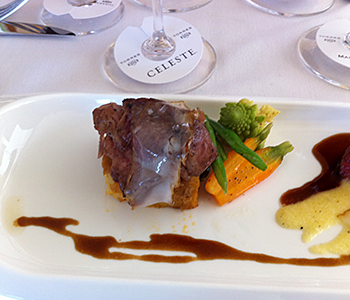 The next set of red wines brought the Celeste Crianza 2011 (another Tempranillo) and the aforementioned Mas la Plana 2010. This time Chef Ito chose to pair it with a beef rib eye covered with an ultra-thin slice of pork jowl and a side of smoked paprika potato and manchego cheese. As the set-up for the wines, the dish couldn’t have better. The Celeste is Miguel’s baby. His father told Miguel he was going to give him a winery and Miguel was obviously very excited. But when he first drove up into the mountains to see his new winery he discovered it consisted of little more than a ramshackle garage. However, Miguel worked hard and in time Celeste because one of the best selling wines in the Torres portfolio. It is full-bodied, dark cherry red with spicy notes of licorice, black pepper, blackberry, and cherry. A steal at $24.95.

The Mas la Plana delivered as expected. Vibrant purple, sharply focused black currant, coffee, hints of vanilla and very, very fine tannins The story goes that Miguel’s father created this 100% Cabernet Sauvignon wine (a grape not native to Spain) to show the world that Spanish wines were as good as French first-growth Bordeaux and top-end Burgundy. Apparently his grandfather didn’t like the wine, though. So Miguel’s father entered the wine into the prestigious (at the time) 1970 Gault-Millau Wine Olympics in Paris. Disruption reigned as the Spanish upstart took the competition and won. Back home after the win Miguel’s grandfather was said to have told Miguel’s father after tasting the wine again. “Well, this bottle is much better than the last one. I guess we can make some more”. If you do go out and buy a bottle either keep it for another five years or decant it a few hours before drinking.

Dessert was a watermelon and maple syrup kanten (similar to agar) jelly and a scoop of serious popcorn ice cream perfectly balanced with a dusting of sea salt and a couple macadamia nuts. Hope this one makes it to Aura menu.

Oh, and that brandy? If you’ve never had a good Spanish brandy you’re missing out. The Jaime 1 Brandy’s stunning bottle is corkscrew shaped and is an homage to the famous Spanish architect Antonin Gaudi. The brandy is copper coloured with an aroma that seems to explode from the glass with raisins, plums, sweet figs, cinnamon, vanilla, licorice, baking spices, chocolate and an almost rum-like quality of brown sugar. Superb.

For the ninth year in a row Rancho Vignola is setting up its Vancouver Island Harvest Sale here at the Mary Winspear Center in Sidney. Many of ...
Read More
Season’s Greetings EAT readers! We at EAT are looking forward to all the wonderful seasonal baking on offer around the city. One of the great joys ...
Read More
Masterclass Candied Citrus Holiday ...
Read More
November | December issue on the stands. Read ...
Read More
VICTORIA Fireplace, couches, old photos, Hudson Bay Company blanket, maybe a pair of antlers and a worn-out sled. Sound like you’re at your ...
Read More