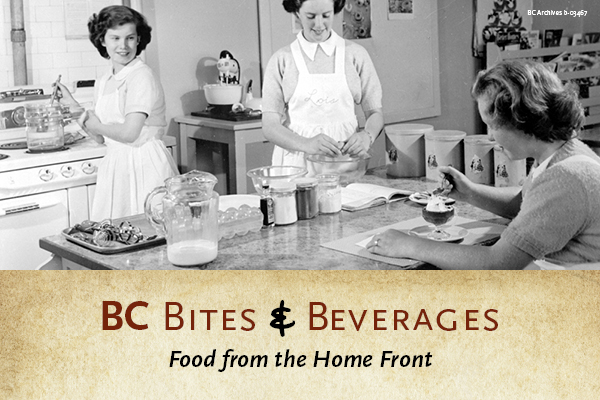 Being part of a network of internationally recognized vineyards and fresh seafood, British Columbia is well known for its rich contribution to food and beverage. Exploring the roots of where this identity comes from provides a unique insight into why British Columbians have developed such passion for gastronomical delights. BC Bites and Beverages, the six-part series put on by the Royal BC Museum, canvasses the history of food and drink within a British Columbian framework.

The evenings are structured around a main speaker supported by local businesses connected to the topic of discussion. Janet MacDonald, Program Manager at the Royal BC Museum, suggests that having additional participants at the event allows for a greater opportunity of conversation to develop amongst the speakers and guests. Following the presentation, the room opens for socializing and sampling of the topical food and drink. With a maximum of approximately eighty people, the space is intimate without compromising the diversity of conversation and education.

The second installment of the series, held on September 20th, 2012, saw Don Genova, Master of Food Culture, speak on the resurgence and security of local food. To support his presentation, he recommended that Victoria Downtown Public Market  be represented at the event. Their dedication to providing a year round space for local farmers, fishermen, butchers, and producers to interact, aligned with Genova’s presentation. City Harvest, a co-operative of urban farmers aiming to convert unused spaces into fruitful gardens, was also present as a guest participant.

The next part of the series will address wartime recipes. During a time when produce was not readily available, rationing was a daily reality and gardening was common. Inspired from her relatives’ old cookbooks, MacDonald decided to incorporate Remembrance Day Weekend with an installment that integrates archival brochures with recipes during the war. Carolyn Herriot, author of the Zero Mile Diet will discuss the history of Victory Gardens, and examine the use of local gardens during wartime.

Experts Annie and Dolly Watts will look at the fusion of traditional Indigenous foods with modern west coast cuisine for the fourth evening, “Rich in Food”. Guests will be able to sample and partake in the preparation of recipes from their award-winning cookbook on Native American Foods. Dr. Nancy Turner, an ethnobotanist, will complement the Watts’ presentation by discussing the Indigenous food movement and how it has partially transformed through the years, yet maintained integrity for tradition.

By Easter, the series will evolve to incorporate the sweeter side of the food. The evening will explore the history of chocolate and candy makers in Victoria. Author, historian, and archivist Sherri Robinson will craft a presentation that walks through the different businesses and manufacturers that have been active in Victoria over the last several decades. The series concludes with “The Teenage Years” of Wine in British Columbia, specifically examining the 1960s and 1970s. Vintners from BC will be invited to share in and speak about the growth of the BC wine industry and talk about how different influences such as weather, have stimulated change. Museum Curator of History, Dr. Lorne Hammond, will show archival wine labels kept in pristine condition and examine how the industry has evolved.

Tickets are available online for the remaining events or through the Royal BC Museum’s Box Office. Tickets are $17.50 for Museum members and $40.00 for non-members.

BC Bites and Beverages

VICTORIA Oughtred Coffee and Tea (Oughtred) is exemplifying the business case for sustainability. Recent recipient of the 2012 EcoStar Award in the ...
Read More