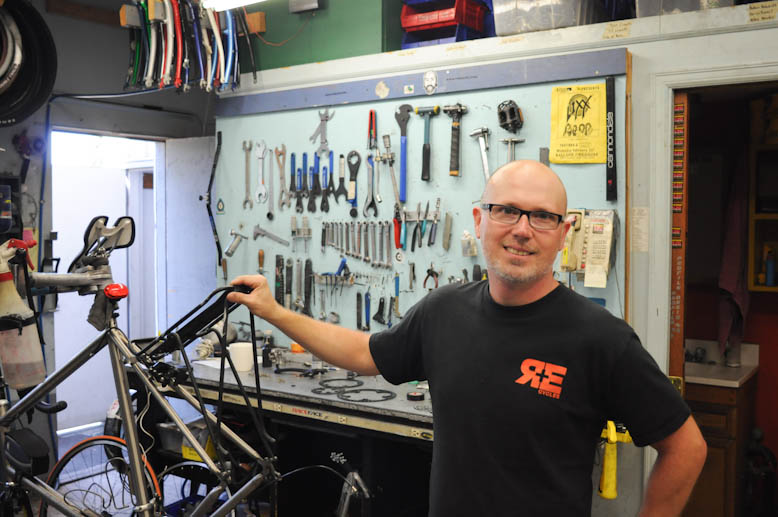 Local cyclist and EAT writer Sol Kaufman showed us awhile back that cycling and coffee have a pretty distinct and longstanding connection—few racers or bike enthusiasts, he correctly points out, will not have disturbing amounts of caffeine in their veins. What Sol didn’t tell us is that the relationship between cycling and craft beer is just as well defined. I’ve toiled much of my life away in bike shops across Canada, and can say this: if you want work done on your bike in a manner that might be called “timely”, bribe your mechanic with some beer (but never Bud Light). Know this, and your chain shall be lubed. What’s more, having ridden the roads in and around Victoria for the past five years, I can also tell you that few group-rides won’t be followed by a gaggle of be-spandexed men and women drinking beer on a patio while their bikes proudly sit in a pyramid of metal and rubber (probably) blocking the main entrance.

I talk with John and Beau, a couple of ridiculously talented mechanics at R+E cycles. R+E stands for Angel Rodriguez and Glenn Erickson, the two fellas that established this shop in the University District of Seattle in 1973. I’m shown around R+E, and what becomes clear, rather quickly, is that this a bit more than a “shop”. You won’t find the standard bike manufacturer names you might expect from most shops—no Giants, no Cannondales, no Treks. Instead, they have but one brand: Rodriguez. What’s interesting is that R+E don’t buy their bikes from a manufacturer—they manufacture their own. No, really. I’m taken to the basement and what I find tucked below this rather modest shop is a machine and frame building workshop. Many of the major tools in the frame building shop, I’m told, are “old Boeing parts.” Keeping it local, indeed. 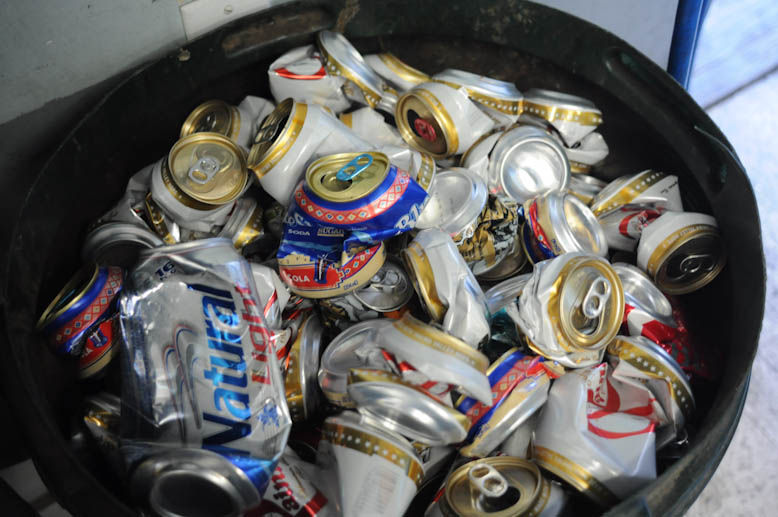 Yes, beer and bike shops are a thing. Note the cans of Rainier, perhaps the finest cheap beer Seattle has to offer. “Do not accuse us of drinking Naturally Light—that’s not us! I think we found that can out back” Beau frantically defends.

Of course, we’re here to talk about food and drink in Seattle, and while John and Beau are careful to give me one of the best tours I’ve ever had of an operation like this, the topic of beer never strays too far from our conversation. While touring this truly beautiful, interesting, and nice-as-hell shop, I picked the tinkery brains of Beau and John for the best places to ride bikes and have a pint in the Seattle area. “There are lots of bike-friendly businesses in Ballard,” Beau, a self-professed “good southern boy,” tells me. “I think there are at least eleven breweries in Ballard,” John chimes in. “Ballard has achieved the U.S. record for most breweries per square mile,” Beau adds. Bikes and beer, not unlike in Victoria, have a pretty distinct and well-established relationship in Seattle. “The [craft] beer and the bike culture in Seattle both kind of exploded at the same time, so there’s a lot of crossover,” Beau says. For Beau and John, bikes and beers are an obvious choice: “What are we going to do on a Sunday bike ride? Let’s go to this brewery, and this brewery across town, and this brewery in South Seattle,” John describes. “You could easily make a century ride [a bike ride over 100 miles] just biking from brewery to brewery,” John tells me, and I get the impression that he’s talking from experience. I was originally going to talk to these guys about coffee and baked goods but, man, they just know so much about beer in this town that I decided, on the spot, to take things in that direction. I asked John and Beau their favorite places to grab a pint post—or mid—bike ride in the Seattle area. 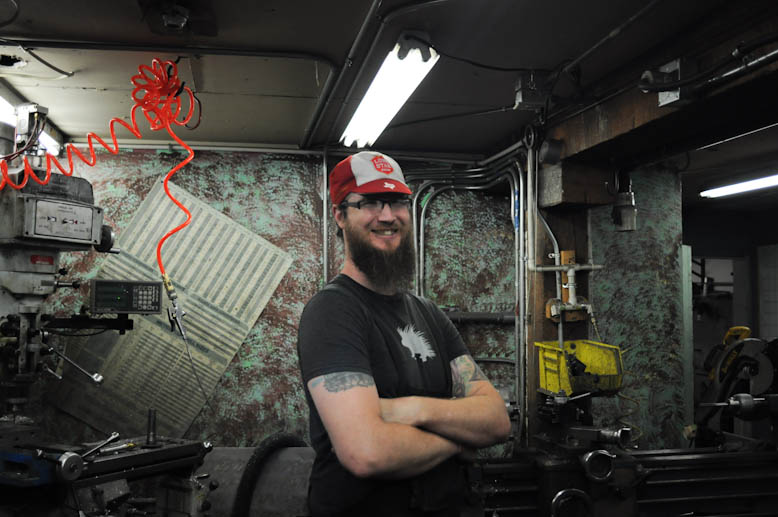 John. Originally from Dallas, Seattle was “an easy choice” for John—”It’s not there” he laughs.

John: “[There’s a ride] 65 miles round trip from Ballard and back… If you take the Burke-Gilman trail [think the Galloping Goose of Seattle] all the way north, that will take you right there”

Beau: “If you’re looking to do a lot of miles [on a beer ride] it’s the best brewery that’s far.”

John: “It’s trails and bike paths the whole way there.”

What Jonathan Johnson would drink on a hot July evening:

John: “At the top of the Juanita Hill is St. Edward’s Park which is really nice—there’s great mountain biking there. There’s another brewery near there, the 192 brewery, it’s right on the side of the Birk Gilman Trail… what’s cool about them is they have a huge beer garden thing, and they serve a lot of other Northwest Microbrewery beers.”

What Jonathan Johnson would drink after a bike ride in the rainy city rain:

Malty Amber (the sweet shall vanquish the cold).

John: “The first big [microbrewery here] was Pike Place…they have a bunch of beautiful bikes hanging up in the restaurant.”

Beau: “They have insane beer knowledge,” Beau adds. “They don’t get as much credit as they deserve, at least locally, because their whole business is located in the tourist mecca of Seattle [Pike Street]. If you talk to Charles (the owner), he’s got more beer knowledge than almost anyone I’ve ever met.”

John: “They have really amazing food sourced heavily from the vendors at Pike Place Market [too].”

What Jonathan Johnson would drink after a near run-in with the Seattle Monorail:

The Pike Stout (to warm and lube the soul, thus warding off the chills of having stared into the face of certain death—the Monorail)

Beau: “Reuben’s is currently our pick for best brewery in Seattle. My favorite thing they have all the time is the Roggenbier—a rye hefeweizen.”

John: “It’s [the Roggenbier] pretty dark [for a hefeweizen].”

Beau: “Every beer they have is a stellar example of that style; they do it all.”

John: “Imperial Rye IPA is probably my favorite. It’s got some hop, but it’s not too much, and I really love rye whiskeys. It has a pretty strong rye flavor, but it’s not overpowering. One or two of those and you’re well off—it’s a 9% beer.”

Beau: “They do a Ballard Kolsch, and it’s the only Kolsch I get excited about. When I think about the Reuben’s Kolsch, I immediately think, ‘Yeah, let’s go drink that!’”

What Jonathan Johnson would drink after twenty dollars of pinball at Full Tilt Pinball:

Well, obviously the Roggenbier and the Imperial Rye IPA. 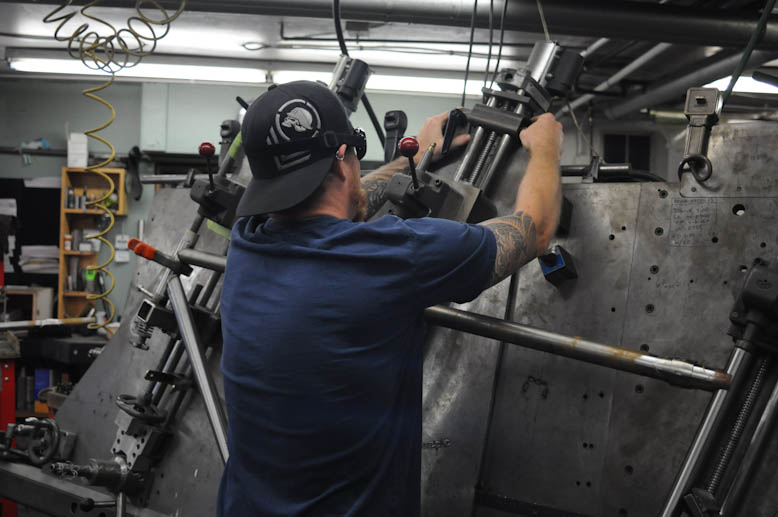 “Todd’s insanely talented. His welds are so smooth, not many people can do what he does,” Beau and John agree.

John: “Café Presse is up on Capitol Hill. They show each stage of the tour live. So does the Summit Tavern. Café Presse is definitely the cycling coffee shop, the hangout—they have the big bike parking out on the street.”

What Jonathan Johnson would get while watching the Tour at 6:00 a.m. :

A Roast-chicken-to-go (see website) and an Americano, of course.


John: “The owners Dave and Haley are friends of ours and great advocates for all things bike. Dave even does some keg/beer deliveries by bike & trailer. Every beer he brews is top notch and takes his beers very seriously…well, as seriously as one can take beer.”

The On Your Left Indian Pale Ale (what a name!).

Many thanks to the fellas at R+E for the informative and fun interview! They’re keen to take me on a beer-century-ride so, if you aren’t already doing so, follow me on Instagram (jonjohns) and Twitter (jonolafjohnson) for shaky iPhone photos and mid-ride tweets.

Superflux Cabana has opened upstairs at 804 Broughton St (the former location of The Livet). Featuring lots of Superflux beer and a menu that ...
Read More
January|February issue is on the stands! Pick up a copy, or read the digital version. Read ...
Read More
There’s a new bread slinger in town. Byron Fry swaggers into Niagara Grocery in his green apron and brown checked vest with baskets full of ...
Read More