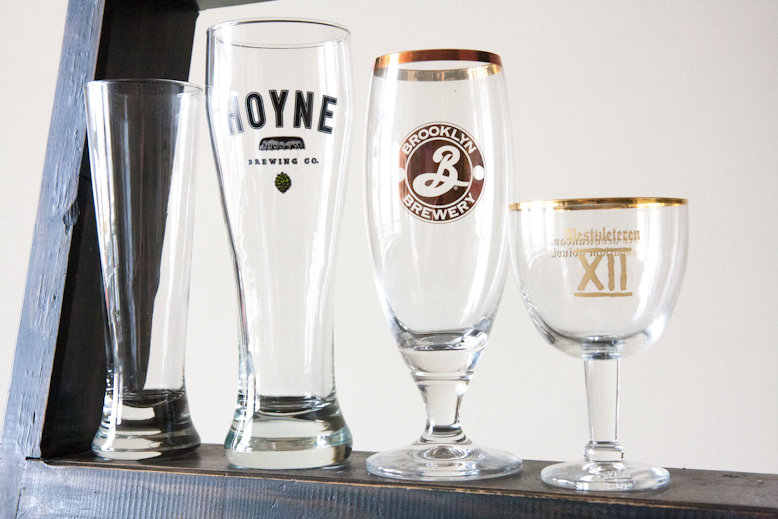 Ever used a cocktail shaker? Notice how neatly the rim of your common North American pint glass fits into it?

“This is called a shaker glass because of its original use in combination with a slightly larger metal cup as a cocktail shaker. It was never designed for drinking anything, much less a beer.” I’m reading from Randy Mosher’s Tasting Beer, an authoritative tome graciously lent to me by Matt Schmitz of Victoria’s online beer museum.“They’re not particularly attractive or flattering to the flavor and aroma of beer.”

I can tell by your scarlet complexion that I’ve embarrassed you. Well, it was Randy, not me, but put those shaker pints away and we’ll pretend it never happened.

Victoria is blessed, as we at EAT are apt to repeat. In the beer world specifically, we have a legion of brewers offering us not just six packs but growlers and bombers as well. And while it might be forgivable to quaff some tasteless import directly from the bottle, the craftsmanship of our locals deserves a little respect. 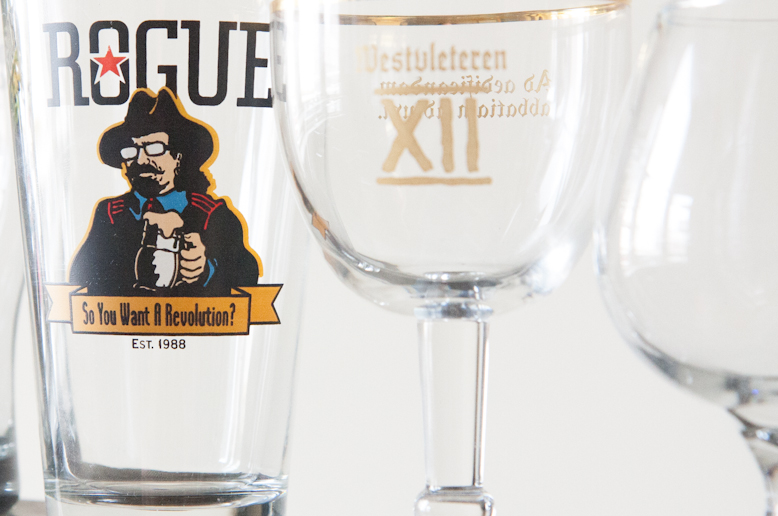 I quote from The Oxford Companion of Beer by Garrett Oliver: “a properly chosen drinking vessel… can bring out a beer’s subtle and brilliant hues of colour or its impenetrable opaqueness. It can display the enticing promise of a firm, white crown of foam, as well as the lace along the side in the afterglow of a sip well savored.” The aesthetics of a beer can do wonders for the flavour, and taking the time to pour into the right glass helps elevate your drinking from ‘thing I do when I’m bored’ to “alchemical yeast appreciation.” Come on — we’re going to the thrift store.

To begin with, you’ll at least need a regular pint glass. A proper one, like the English Tulip or the “Nonick” pint, provides a taper and sometimes a bulge for better grip when you’re getting loopy. The taller height leaves room for the foam created by pouring the beer directly into the bottom. Yes, this is what you want — stop pouring it down the side. Creating a large head will help degas the beer, making it easier to smell hop aromas and prevent you from feeling bloated afterward. When a large head settles down it will also last much longer. If you have to, pour, stop to let the head settle, and continue pouring. Repeat as needed.

According to Randy, the standard pint is recommended for “low-gravity session beers” and Irish stouts, like Lighthouse’s Keepers. Low gravity means that the density of the wort is lower, i.e. that the beer is made with fewer grains and malt. These beers tend to be lower in alcohol and milder in flavour, making it easier to drink larger quantities during a typical “session”. Lighthouse’s Tasman Ale is a great example, though many of Victoria’s most popular beers also land somewhere near here, from Phillips’ Blue Buck to VIB (Vancouver Island Brewing)’s Piper Pale Ale. 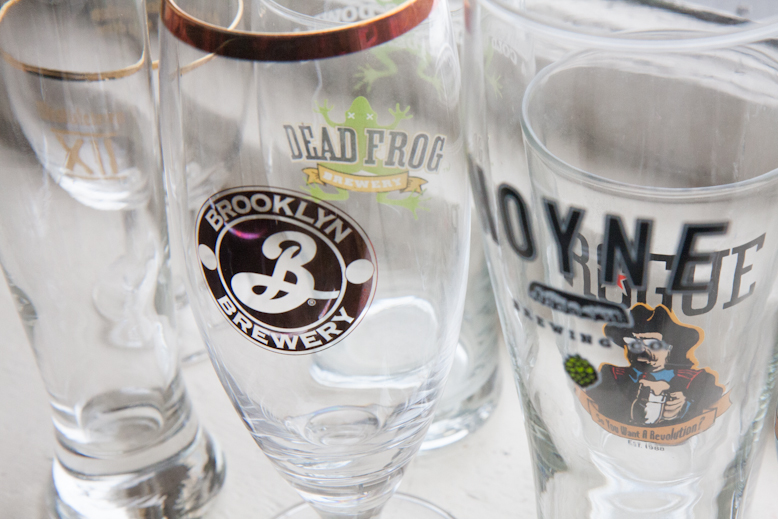 Lighter beers, like pilsners, lagers, and wheat beers, tend to go best with skinnier, taller glasses that show off the beer’s light colour and leave lots of room for head. These beers tend to pour high due to their extra carbonation and light weight, and the inward taper concentrates the lighter foam for more flavour and longevity. If you’re as big a fan as I am of the banana esters in VIB’s Beachcomber Summer Ale, or you drink Driftwood’s White Bark year-round, this is a good glass for you.

In the other direction is glassware that bulges at the bottom, such as tulip glasses, goblets and snifters. Tulip glasses have a thin stem, an inward taper to hold in aromas, and an outward flare at the rim, which supports the head of the beer and makes it easier to sip from. These glasses are good matches for some of the more intense, higher alcohol and more flavourful beers, like IPAs and bocks. Driftwood’s infamous Fat Tug IPA, Hoyne’s Big Bock, Lighthouse’s Siren Imperial Red Ale, and Phillips Amnesiac are all good examples. The higher gravity and alcohol content you go, and the more intense flavour you include, the smaller and more goblet-like the glasses get. Phillips’ Twisted Oak Scotch Ale, VIB’s Hermannator Ice Bock, Hoyne’s Dark Matter and Driftwood’s BlackStone Porter are all rich and complex enough that having a bowl to swirl the beer in adds a lot to the experience.

As you can see, it really only takes about three glasses to cover most of your bases, at least with local beer. Given Victoria’s population of quick-to-move university students and retirees liquidating their glass collections, there’s little excuse for imbibing from the wrong vessel. Armed with this new knowledge, I charge thee: go forth, and drink beer.

In late September I was lucky enough to be invited (along with other media) to the Wickaninnish Inn on Vancouver Island’s rugged west coast to meet ...
Read More