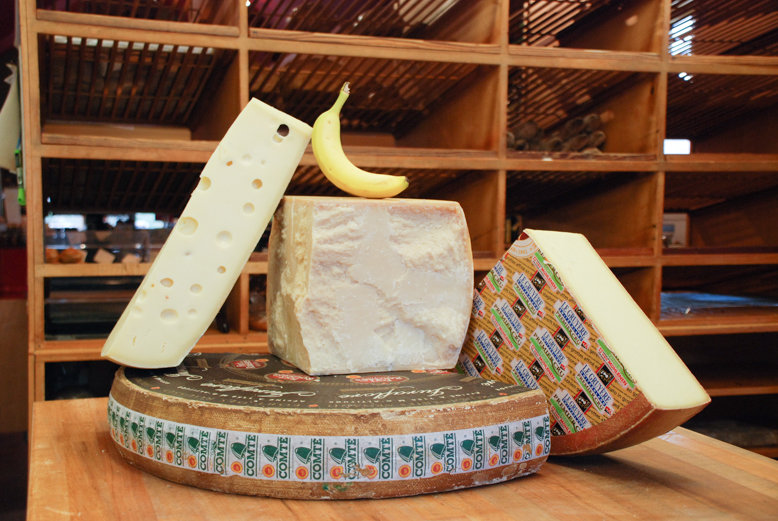 It’s a strange feeling sitting beside a cheese that weighs more than you do—a bit humbling really; a cheese that will give you such a workout opening it that you don’t need to worry about how many pieces you nibble on; a cheese that took 50 cows, almost 1000 litres of milk, and many months (or even years) to create; a cheese that, quite frankly, is boss! It may sound like an obscure creation aimed to sit in the Guinness book of world records, when in actuality it is a normal routine for select cheesemakers and mongers. The grand Alpine cheeses of Europe—Comté, Gruyère, and Emmental, among others (Parmigiano!)—are in a class of their own. Massive wheels of cheese formed in mountain pastures in the summer and proudly brought back to the valley villages in the fall. 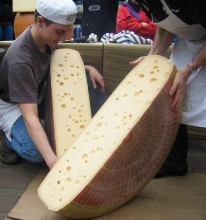 Along with being some of the biggest cheeses in the world (record breakers aside), these cheeses are also some of the oldest, dating back over a thousand years. Like much cheese of those times, they were made out of necessity to provide a reliable food source throughout the winter. In preparation for the lush and fertile farming ground that summer brought to the valleys, the shepherds would move their herds into the mountain pastures abundant with grass, herbs, and wildflowers, which makes for fragrant and rich milk. Here they spend the summer with their herds, rotating through pastures and pooling milk with their neighbours in alpine huts, to create these behemoth cheeses.

There are a couple of reasons why the wheels are so darn big. A large and relatively hard cheese can be aged for many months or years without concern of spoilage, essential to making sure the villages are fed through the harsh winter months. They are also much easier to transport come autumn. Several large wheels are much more painless to trundle down the mountains than hundreds of little ones, although the latter could end up as quite an amusing scene. Perhaps how the tradition of cheese rolling got its start?

This whole process is cause for celebration in the villages and the cows are shown a large amount of respect for their efforts. In an event known as Alpaufzug, the cows are adorned in garlands of flowers and paraded through town before heading up into the mountains. Those with the highest milk production lead the herd and have the privilege of wearing the largest cowbells. Even the herders get into the spirit and dress in special outfits. To commemorate their return in the fall, a similar celebration called Alpabzug, is held. Again, the best milk producers get the biggest bells and praise. Although quite an old tradition, it is still followed in many areas. 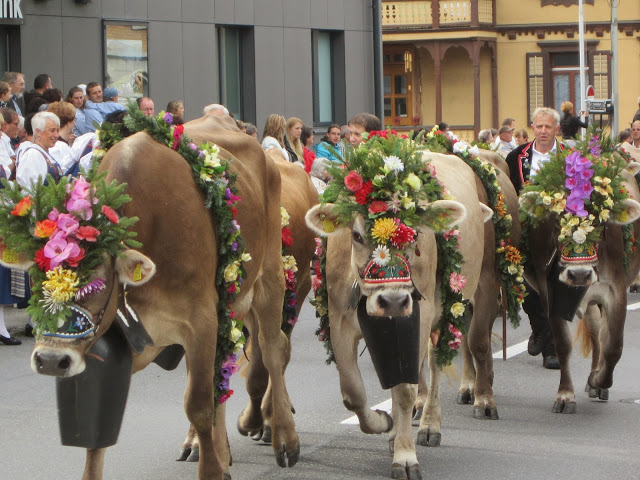 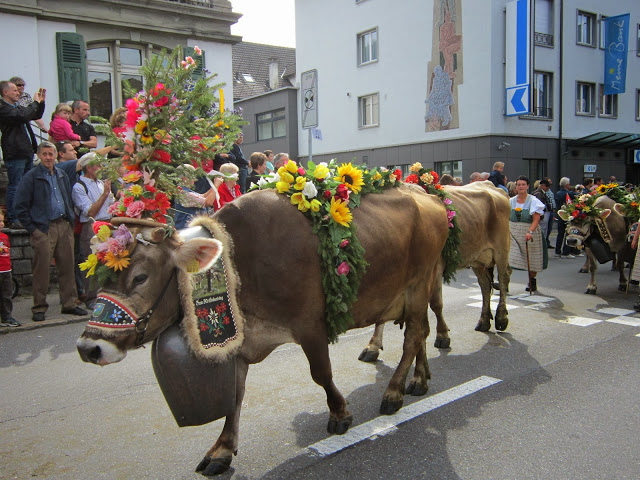 The cheeses themselves are more than enough reason to throw a party! The milk gains so much complexity and flavour from the summer diet; the winter milk, produced from hay, pales in comparison. It is such a contrast that some of these cheeses are produced solely from summer milk, with the limited quantity of winter milk going to an entirely different type of cheese.

Next time you buy a piece of cheese or pull one out of your crisper drawer, remember that these small nuggets of goodness have a long production path and are part of a much larger story. Also, ask your cheese monger for a sampling of the biggest cheeses they carry!

Considering the journey that the milk and cheese have gone through, it is quite the thrill to see one of these being cracked open and to taste the cheese fresh from the wheel. Ottavio Italian Bakery and Delicatessen in Oak Bay hosts the ‘Big Cheese Cut’ on Saturday April 25 starting at 11:30am. A free, fun, family event where the cheesemongers bust open the largest wheels of cheese.

For the ninth year in a row Rancho Vignola is setting up its Vancouver Island Harvest Sale here at the Mary Winspear Center in Sidney. Many of ...
Read More
Season’s Greetings EAT readers! We at EAT are looking forward to all the wonderful seasonal baking on offer around the city. One of the great joys ...
Read More
Masterclass Candied Citrus Holiday ...
Read More
November | December issue on the stands. Read ...
Read More
It’s noon and the full length of Puerto Vallarta’s beautiful beach is packed with people. But since I set out early, I’m already settled into a ...
Read More