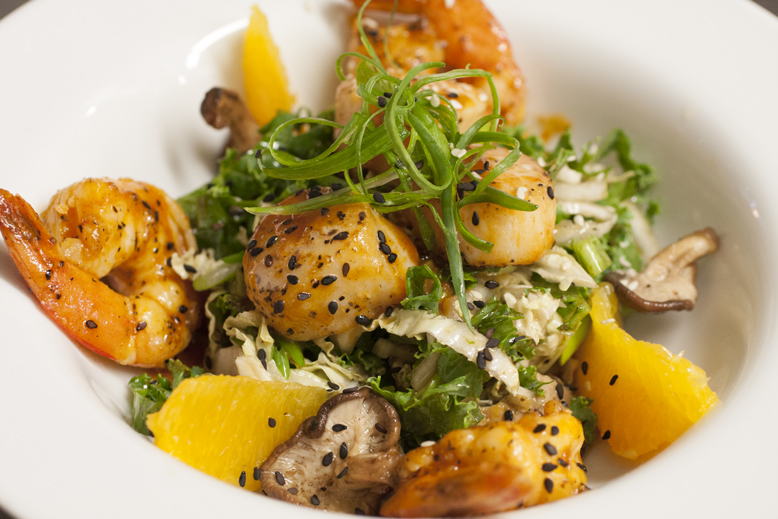 Having just moved to the Oak Bay neighbourhood, it’s only taken me a few weeks to figure out what makes this area so special: a blend of community and tradition. Blighty’s Bistro perfectly captures the Oak Bay atmosphere. I was thrilled to stop in before their dinner service for a little history, pan-seared seafood, and the latest news from the set of Gracepoint.

Owner Richelle Osborne bought Blighty’s 18 years ago. Previously named Old Blighty’s Fish and Chips, Osborne felt inclined to keep the name to honour the Oak Bay destination. “One of my biggest regrets is not changing the name, as it doesn’t represent the current cuisine,” notes Osborne.

Gone are greasy dishes, replaced with a concise menu that rotates every three months. Every season, seven entrees with a global influence are featured. Currently, Blighty’s is focused on fresh summer flavours, including a Malaysian seafood curry, and halibut fish tacos.

Prawns, mussels and scallops mingle with a butternut squash, yam and coconut curry, while the tacos come topped with guacamole, citrus crema and pico de gallo.

I tucked into Blighty’s scallop and prawn starter, a vibrant blend of napa cabbage, kale, shitake mushrooms and orange wedges flavoured with citrus hoisin and chili lime butter. For those looking to satisfy their seafood craving and their daily kale quota, this starter covers both. The crisp cabbage and kale play nicely with the dominant chili and hoisin.

Other notable dishes include Salt Spring Island mussels in a pesto cream sauce, house made orrechiette pasta alongside beef tenderloin and wild mushrooms, and a roasted pork chop with pear and ginger compote. 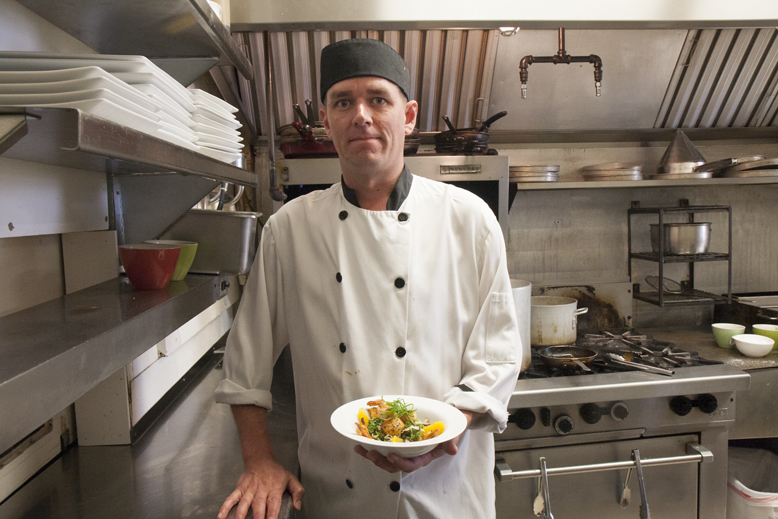 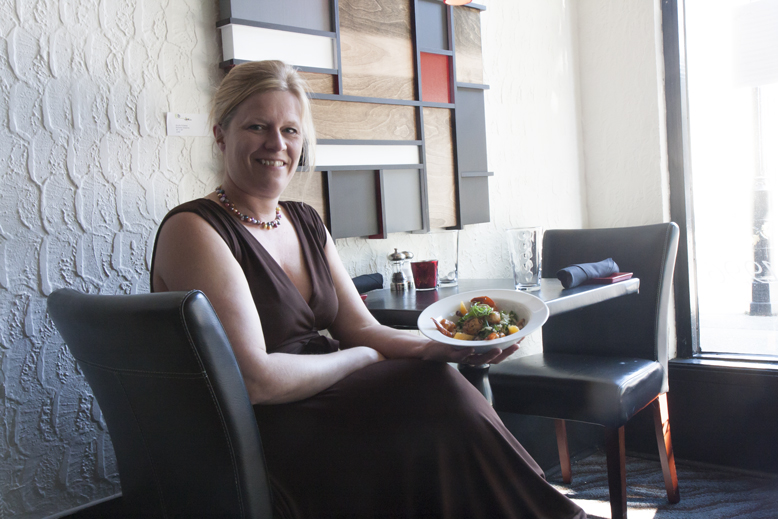 Blighty’s head chef Emil Radcliffe uses local products when available. Osborne admits striking the balance between buying local and offering cost effective menu can be tough. Even so, Blighty’s serves chicken from the Cowichan Valley, pork from nearby Village Butcher, and beef from Slaters. Behind the bar, Orborne pours Pentage Winery from Penticton, local beer from Phillips and cider from Sea Cider in Saanich.

“The one thing that always stays on our menu is a gourmet fish and chips,” says Osborne, “A tribute to the history of the restaurant.” Of course, it’s not just any fish and chips. Named the Bill Mur after two regular customers, Bill and Murray of Oak Bay, a sauté of prawn, wild mushroom, spinach and goat cheese is piped inside West Coast cod and lightly tempura battered. All orders come served with hand cut Kennebec fries and Caesar salad.

Osborne once named every menu after customers, friends and staff, but the process became tricky. With an ever-changing menu, names couldn’t stay forever. Now, she focuses on cultivating relationships off the menu. “I feel a part of Oak Bay. There’s a wonderful feeling of really belonging,” says Osborne.

Her restaurant career has led to a passion for the arts. Osborne recently redecorated, hanging her own artwork in the dining room. With each new menu, she changes the hanging ceiling display. A mother of two girls, Osborne relishes her creative time and has already sold multiple pieces.

The Gracepoint excitement has also reached Blighty’s, as they recently filmed a scene inside the restaurant. (The Gracepoint Journal is conveniently located across the street).

While Blighty’s welcomes the Hollywood spotlight, Osborne’s connection to longtime customers is the true star.

For those looking for a neighbourhood bistro, Blighty’s is the place to be.

Many people who seek out farmers’ markets are looking for an alternative to the mass produced ingredients they find in grocery shops. So it would ...
Read More