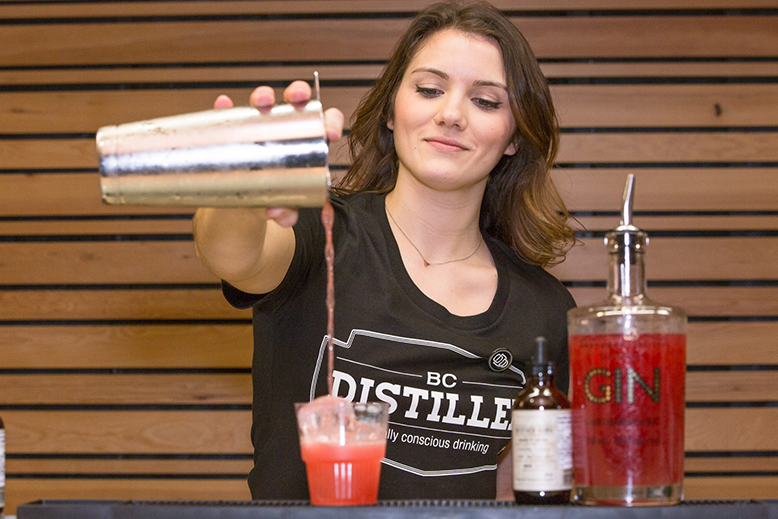 On March 26th twenty-six local, craft distillers will gather at the Croatian Cultural Centre in Vancouver’s east end for the 3rd Annual BC Distilled festival.

The number of local distilleries has exploded in recent years as changes to BC liquor laws have allowed small and medium sized distillers to set-up shop and sell their products directly from the distillery in on-site lounges and tasting rooms. Rules have also been relaxed to allow craft distillers to promote their spirits in bars and restaurants.

As a reflection of this growth, BC Distilled was created to allow British Columbia craft distillers a place to come together, network and showcase their products to the public.

Look for the return of popular Dubh Glas Distillery’s Noteworthy Gin, Wayward Distillation House’s Unruly Vodka and Sons of Vancouver Distillery’s No. 82 Amaretto. There will be an on-site liquor store so you’ll be able to purchase your favourite bottles and new this year, Woods Spirit Co., BC’s newest distillery, and will be launching its first product, an amaro.

“This is your single best chance to try everything BC has to offer, and to meet the creative people who make these spirits,” says BC Distilled founder Alex Hamer.

Small bites will be provided throughout the evening, courtesy of chefs from Blacktail, Boulevard, Cascade Room, Edible Canada, Forage, The Union and Westin Bayshore.

New this year is a pre-festival event. At the Westin Bayshore on March 25 the first-of-its-kind preview of BC cask-strength ‘almost whiskies’ will makes it debut. Over half the distilleries in the province have made or are in the process of aging spirit which will start to come to market after they pass their legal three-year mark in the barrel, after which they can be legally called whiskies. For this sneak-peek tasting, eight local distillers will have their un-aged ‘whiskies’ available for tasting.

Proceeds from the festival go to support the Pacific Assistance Dogs Society (PADS).

Don’t miss this exciting event. Tickets are on sale now are expected to sell out.

The article on L’Apéro in the May|June issue should have stated Chef Andrea Maiolo staged at The Courtney Room and Zambri’s and that he held the ...
Read More
May|June issue on the stands. Read ...
Read More
Maybe it’s Osoyoos’ proximity to BC’s most esteemed viticultural area. Or perhaps it’s all but inevitable in a destination resort town with ...
Read More