Cook Culture’s Advanced Home Chef Series, Part 3, was met with a full house of eager students this past Friday night. The topic was Building a Culinary Repertoire with David Mincey (formally of Camilles Restaurant and now with Preservation Foods). David usually introduces the class by telling us a simple tip that makes cooking easier, and this week was no exception. The “tip of the week” was that whenever he begins cooking, he starts by melting a bit of butter in a pot; this way, when he needs butter for greasing a pan, or adding butter to a dish, he has it on hand, instead of cold from the fridge. The night was filled with other similar great tidbits — too many to list, or repeat, you’ll just have to take a class with him!

David went straight to work, showing us how a simple dough can be used for many different dishes, thus expanding the repertoire of what we can make. He first made a quick bread (basic recipe last class), but unlike the class where the dough was a cornbread savory based bread, this time he made it into a sweet dessert bread. He put in cocoa, chocolate, maple syrup, marmalade, and a fig/raisin concoction that had been soaking in wine over the last week. He mixed it up, tossed it in the oven, and then quickly moved on to another type of bread. Next up was an Asian style dough; David really likes this dough because it’s very resilient even after sitting in the fridge, so you can make it the morning of a dinner party and when you take it out hours later it will still be as springy as when you first made it.

Put dry ingredients in a food processor, add water and quickly turn on processor to mix. Dough is mixed when it feels elastic, yet moldable.

David did warn us that the dough can be over-kneaded. He tries to roll it (if the recipe calls for it) properly the first couple times. After around 3 re-rolls it starts to get tough, and then cooks to a chewy hard consistency. After he made the dough, he plastic-wrapped it and put it aside. The dough can also be made with a slightly less Asian flare by using  oil other than sesame. 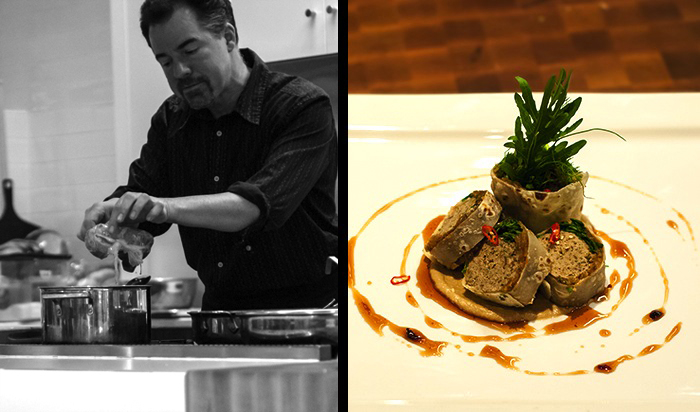 David now shifted his attention to a large bag of pork he brought out, explaining we were going to make “meat glue”, which is an essential thing to know if you make dishes like meatballs, croquettes , ravioli and other pastas, filling for meats and rolls, and stuffing. The basic premise of meat glue is to use a very fatty, generally low quality meat this way that, when mixed, the fat congeals everything together, like glue! You can add whatever else you like to it, so it has a distinct taste for the style of cooking you do. For example if you wanted an Italian style “meat glue” add basil, parmesan cheese and tomato. David made his in an Asian style using ginger, miso, soy sauce, chili paste, caramelized onion and cilantro. To prepare, he chopped all the pork into cubes, keeping any fat that was on them. He then put everything in a food processor and blended until it was a paste. He immediately formed a few into balls (meatballs!) on a baking sheet and threw them into the oven.

Looking at the meat glue, he exclaimed, “We will now make a sausage.” I thought that it would be hard to make, but David made it really easy. He rolled up some of the meat glue and tied it up in plastic wrap (see picture for how it looks) and dropped it into a pot of boiling water, explaining that most plastic wrap’s melting point is above 250°C and that the sausage would be done when it felt firm. With both meats cooking, he went back to his dough; he unwrapped and divided it. He made many small rounds about 4 inches across and relatively thin. He took another section made two rounds of the same size as the others, but a bit thicker and set them aside. 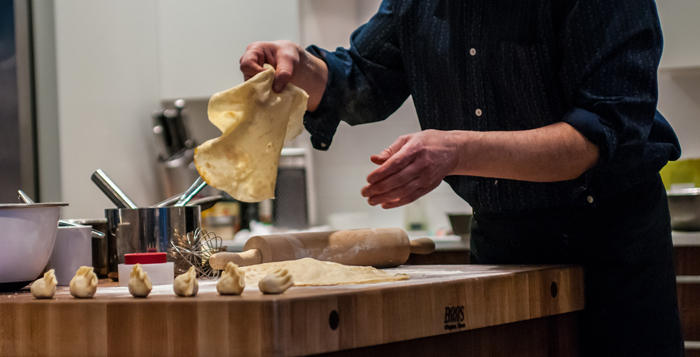 David lifting a crepe off another crepe after being fried.

Once the meatballs finished, he took them out of the oven and pinched them into the 4-inch dough rounds, making pot stickers! He set them aside and went back to the thicker rounds. David took some sesame oil and brushed one side well, and then he put the other round on top and rolled them out together. He told us he was making a crepe out of this, so to roll it as thin as you can (while still fitting in your pan). He put a large skillet on the stove and cranked the heat while telling us “it need to be as hot as someone on a street corner making this in a cast iron pan over open flame” — that is, really hot. He tossed the crepe down onto the skillet, left it a couple seconds and quickly flipped it over. Once off the heat and onto the cutting board he peeled apart the two layers! This was the reason the sesame oil was applied before rolling them out. If you miss any part of the crepe, they will stick and cannot be made as thin.

He went over to the boiling water took the sausage out of the water, feeling for firmness, placed it on the counter and unwrapped it. It looked exactly like one from a store, just without the pinched ends from being linked! David took the sausage and rolled it up in one of the crepes, along with fennel, arugula, and caramelized onion. He finished wrapping it all together and told us the crepe and the meat together is called Moo Shu crepes. You can add other things to it that might help the pork flavour along, just as David did. He put the crepe aside and went back to the pot stickers, first steaming them in a pan with a lid on and then frying them up. This is the traditional way to make them, but sometimes it is easier to reverse the order; fry them and then steam them—doing it this way is makes it slightly easier to manage how well they are steamed.

To register or for more information go here

You can also go into Cook Culture and talk with one of the staff about the classes at:

July|August issue on the stands. Read ...
Read More
Serve with some warm crusty bread —grilled cornbread is my choice in the restaurant. For 4 servings, you will need: 1 large head romaine lettuce; ...
Read More