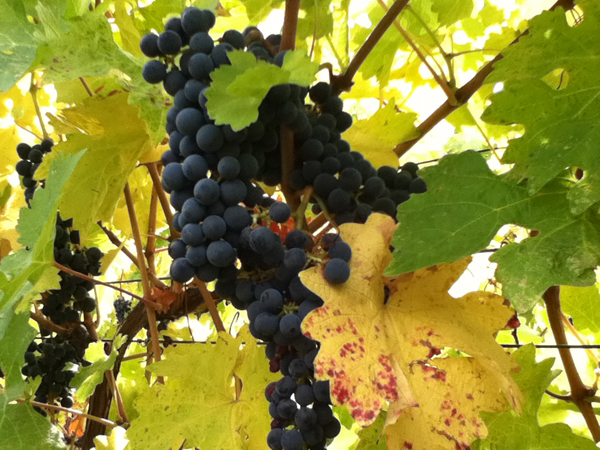 Some call Cabernet Sauvignon “the King of Wines”. It is one of the main grapes grown in France’s famed Bordeaux region and for almost a hundred years it has formed the backbone of some of the world most prestigious wines.

In the new world, Cabernet Sauvignon’s popularity boomed shortly after prohibition was over in the 1940’s and has since been the iconic variety of California. The fame soon travelled to the Okanagan in the early 1960’s, when wine producers in the valley started converting their local varietals like Marechal Foch to the more mainstream grapes such as Merlot, Pinot Noir, Chardonnay and many more.

According to the BC Wine Institute, Cabernet Sauvignon is the fifth most widely planted grape in the Okanagan Valley at approximately 680 acres, coming in just under Pinot Noir at 780 acres. Due to the climatic demands, most of the Cabernet Sauvignon is planted in the South Okanagan area. In the past 15 years there have been many discussions over whether the grape is suitable for the Okanagan, but like all other grapes, it really comes down to the producer and site.

Cabernet Sauvignon does best with long, dry sunny days that are warm (but not overly hot), allowing the fruit to fully ripen and the sugars to rise, and relatively cool nights that ensure balanced acidity in the grapes. There are small plots of vineyards scattered through the South Okanagan situated in these perfect sweet spots.

While you might think that a wine labeled Cabernet Sauvignon would be made only with Cabernet grapes, this is not always the case.  According to Canadian VQA labelling laws, only 85% of a wine named after a grape must be made from that variety.

Knowing which producer makes the best Cabernet in the valley raises other questions regarding current trends in winemaking. Are single vineyard and estate bottled wine really superior to others? Do specific winemakers typically make better wines than others do? And how important is the winemaker when it comes to crafting the finest wines?

As it turns out, wineries enjoy similar levels of success regardless of whether their Cabs are single vineyard (grapes some from same plot of land or vineyard every year), estate bottled (grapes come from vineyards that a winery either owns or lease long term), or blended (grapes come from several appellations within the valley, a portion of which might be winery owned). Though single vineyard wines are more likely to be distinctive, as they come from the same site each year, many winemakers have a talent for achieving a consistent style through blending.  With Cabernet Sauvignon as the main base, winemakers may choose to add varying percentages of Merlot, Cabernet Franc, Petit Verdot and Malbec (as is done in Bordeaux), or experiment with other less conventional grapes. The added grape varieties all possess their own characteristics, and act independently to slightly alter the flavour profile of the Cabernet. They can increase the tannin and acidity levels for longer aging, add herbaceous spice notes, or smooth the wine with riper fruit. By conducting blending trials each vintage, winemakers utilize the grapes to create a consistent flavour, even in cool years when one variety’s strengths can compensate for another’s weakness.

Fairview Cellars, located next to Oliver’s Fairview Golf Course,  is one of the popular Cabernet Sauvignon producers in the Okanagan Valley. Winemaker/owner Bill Eggert makes a series of Cabernet blends plus single variety labels. They are all uniquely created and terroir-driven, and are among the most collectable and long-lived in the valley. Across the road on the Black Sage Bench is where you will find Black Hills Winery, home to  one of the Okanagan’s finest Cabernet blended wines – Nota Bene. A few doors down is Church and State Wines, who also produce a collection of both single varietal and Bordeaux style blended wines. And don’t forget La Stella Winery in Osoyoos, the winery with a Tuscan flare that makes the label Fortissimo, a Cabernet blend with Merlot, Cabernet Franc and touch of Sangiovese. These are just a handful of producers having success with Cabernet Sauvignon – there are many more to discover.

2005, 2006, 2007 and 2012 are all stellar valley vintages for Cabernet, so be sure to stock up some Okanagan Cabs and see for yourself how long these beautiful wines can age.