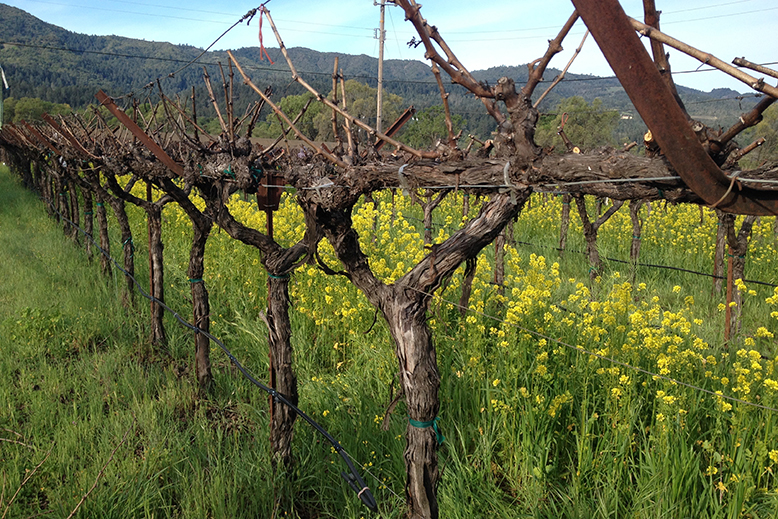 I’ve just returned from a week in California, touring vineyards from Paso Robles up through to Napa and Sonoma. Though I was happy to have a week of sun, the vines might be feeling a bit confused after the warmest winter on record coupled with drought conditions in many areas. Bud break is 2-3 weeks earlier than normal in many vineyards, meaning that frost damage is a risk for a few more weeks. It also means that the 2014 vintage could prove to be one of the most rewarding on record, with the potential for an extended, dry growing season. Some vineyards, especially those that are dry farmed and with extensive root systems, appear to be in best stead, as they are acclimatized to the lack of water and are already digging deep in the soils searching for nutrients and moisture. The biodynamic and organic vineyards that I visited were also faring well, for the same root reasons, coupled with healthy soil and active microbacterial culture. The very brief “March Miracle” rainfall in some areas was heralded as a saving grace in areas where the soils were able to absorb the moisture (all hail limestone!), but wasted in others where the soils were too dried out and compact to take in the trumpet blast of precip. Many grape growers were now looking wistfully forward to the possibility of El Niño, and the chance for refilling reservoirs and replenishing soils.

The diversity of soils (50% of the planet’s soil orders are found here), range in altitude (wineries are planting higher, more remote and closer to the sea) and marine influence (mountain gaps allow cool Pacific fog to rush in and out daily) results in drastically different microclimates and terroirs, expectations and outlooks for 2014. Generally all growers were expecting lower quantity than the previous two vintages, but high quality from the concentrated grapes; both very good things for the California wine industry as a whole in my opinion.

Hey Canada – perhaps we can scuttle the oil pipeline idea and just waterslide our southern neighbours some melted snow.

This dual citizen cabernet sauvignon is as local as I can get in a column about California. Plume Winery bridges the 49th parallel with one Canadian parent (the Stewart family, of Quails’ Gate Winery) and one American parent (the Zepponi family, of ZD Winery in Napa Valley). Their joint vintage began with the 2009 vintage, and with fruit sourced across Napa from north of Calistoga through to Rutherford and south to Atlas Peak and Oak Knoll. The resultant blend is splashed with cabernet franc and petit verdot to give a ripe and full bodied red, with warm black berry fruit, ample plush tannins, spiced oak, dark chocolate cherries, mocha and a touch of sweet vanilla on the finish. When you consider that the wine rests for 20 months in French oak and the price of the land in Napa, the price is impressive. Well built and ready to drink now, especially if you’re faced with roast tenderloin or filet mignon. 89 points.

I had goosebumps for the entire duration of my visit with Paul Draper at Monte Bello vineyards, high atop the Santa Cruz Mountains AVA, a mere 15 miles from the Pacific. It wasn’t just because of the crisp mountain air and ocean breeze (though it was bracing). It was because I was talking, walking and tasting with a living legend in the wine world. Draper, with more than 40 years at Ridge, is a pioneering steward of the land and traditional winemaking, and his 1971 Monte Bello cabernet sauvignon fared well at the famous Judgement of Paris tasting in 1976 (plus was the overall favourite in the retasting 30 years later).

This wine, from their Lytton Springs vineyard in Sonoma’s Dry Creek Valley, is predominantly old vine heritage zinfandel (82%), along with 16% petite sirah and 2% carignane, aged for 14 months in American oak (25% new). Dusty black cherry and blackcurrant teem with deep anise, olive and black floral notes. The acidity is brisk and structured tannins are firm and slightly dusty. 2011 was a cool vintage, allowing the finessed nature of these old vines to shine. Lovely bones here, clad in expressive, fragrantly herbed black fruit. Drinking very well now, but you can easily hold another decade. 92 points.

Entwine is a unique project pulled together by the Food Network and Wente Vineyards and aimed at a younger wine drinker. Karl Wente, 5th generation winemaker, teamed up with the Food Network’s executive chef and the F&B editor to concoct an approachable, modern chardy to pair with food. They recommend you pair it with “potato chips, grilled cheese sandwiches and hanging out with friends”. I can’t disagree there – though I water it’s also intended to pair with sitting in front of the TV & Food Network programming. The sustainably harvested grapes were fermented in stainless steel and oak, building freshness and spicy creaminess. Toast, vanilla, apple butter, pear and light caramel notes dominate, with a sprig of fresh apple and citrus on the finish. 86 points.

The familiar Esprit de Beaucastel was remaned Esprit de Tablas with the 2011 vintage, the winery’s flagship wine reflecting their Paso Robles home rather than their sister property in France’s Rhone Valley. Tablas Creek is a partnership with France’s legendary Perrin Family of Chateau de Beaucastel and America’s Robert Haas, a longtime importer and founder of Vineyard Brands. The families created a partnership in 1985 and in 1989 purchased a 120-acre property in the hilly Las Tablas district of west Paso Robles for its similarities to Châteauneuf du Pape: limestone soils, a favorable climate for organic and biodynamic viticulture and rugged terrain. Akin to the Rhone, they planted the varieties that they knew: Syrah, Grenache, Mourvedre, Counoise, Viognier, Marsanne, Roussanne, Grenache Blanc and more. The 2011 Esprit de Tablas is a structured, spicy blend of mourvedre, grenache, syrah and counoise, completing this mineral-dominant savoury red. Strawberry jam, ripe dark cherry and peppery spice carry to a fresh palate and are met with worn leather, earth, cured meat and wild herbs. The cool 2011 vintage gives this a welcome leanness and elegance, and I predict that it will continue to impress for the next decade. Enjoy now with grilled sausages, pork or lamb chop. 93 points.

After a full day of wine tasting, there is nothing better than a cold beer. Scratch that – there is nothing better than a cold, flavourful, craft beer. Sometimes a little brown shugga’ is exactly what the doctor ordered. The beer is quite unique – the brewers originally added brown sugar in a flailing attempt to save a failed batch of Olde GnarlyWine Ale in 1997. The resulting American strong styled ale is now only available sessionally, and is the most expensive beer in their portfolio to produce. Powerful (a hefty 10% alcohol) and medium in body, with careful notes of caramel, light maple, torched brown sugar, earth, orange peel and a balanced bite of citrus hops. Quite intriguing – the blend of earthy potency and heady sugar. Not nearly as sweet as I thought it would be, but about twice as powerful. I don’t recommend knocking back too many of these without grilled sliders or a pork sandy.

DRINK This. Each week Treve highlights 5 timely and tasty picks. Her weekly choices include Locavore (BC wines), Cellar Dweller (wines to lay down for a while for maximum enjoyment), Budgeteer (wallet-friendly bottles under $15), Adventurer (wines for geeks, enlightening or pushing the envelope) and No Wineos (a non-wine pro-alcoholic beverage). So what are you waiting for? DRINK This!

DRINKing Guide: How to use our purchasing information.
*Asterisks denote wines that are only available at the winery or select private liquor stores. All other wines are available through BC Liquor Stores. The price is suggested retail price, and may fluctuate depending on source. Wines are scored out of 100 points.

It’s all about cocktails, the home bar, what to buy, and what to serve. Founders Kyle and Nate launched their bar consultancy, The Nimble Bar ...
Read More
It’s almost summertime. And in case you didn’t know, that means gin cocktails on the patio. Vancouver Island has a plethora (yes, I just said ...
Read More
“Celebrating Caesars: Canada’s Signature Cocktail” If you enjoy sipping on a caesar get ready to raise your glass on May 19th, to ...
Read More
“Wine is one of the most civilized things in the world and one of the most natural things of the world that has been brought to the greatest ...
Read More
Lillooet. Wine. Not two words that you usually see together, but that hasn’t deterred the folks at Fort Berens Estate Winery. They’ve been too ...
Read More
I’m not advocating saving sparkling wine for special occasions. Quite the opposite – any day that ends in Y receives a YAY sparkling wine vote ...
Read More

Grand Opening of the Victoria Public Market at the Hudson Sept. 14th, 10AM Opening Ceremony, 11AM Ribbon Cutting We took a tour through the historic ...
Read More