“Crafting together gingerbread and other edible ornaments, in the name of charity and friendly competition”

Now officially into winter,  the city is beginning to bustle with a festive atmosphere. Downtown Victoria is changing from being a destination for tourists during the summer season, to a lit up haven, ripe with carols drifting through ears of shoppers. To ease the mind from the stress of endless lists of presents, a welcomed break from holiday shopping can be found through visiting the annual display of gingerbread houses, showcased at the Inn at Laurel Point until January 1st. Local media personalities Jeff Bell, Tess Van Straaten were among the panel that offered judging. With Wendy Okopski of the Delta Ocean Pointe winning first place with the professionals, and Sarah Jones from Love One Hair Studio taking first in the amateur category, the judging has already concluded. However, the winner of the People’s Choice, a public based decision, is still open for voting and will be revealed in the new year. 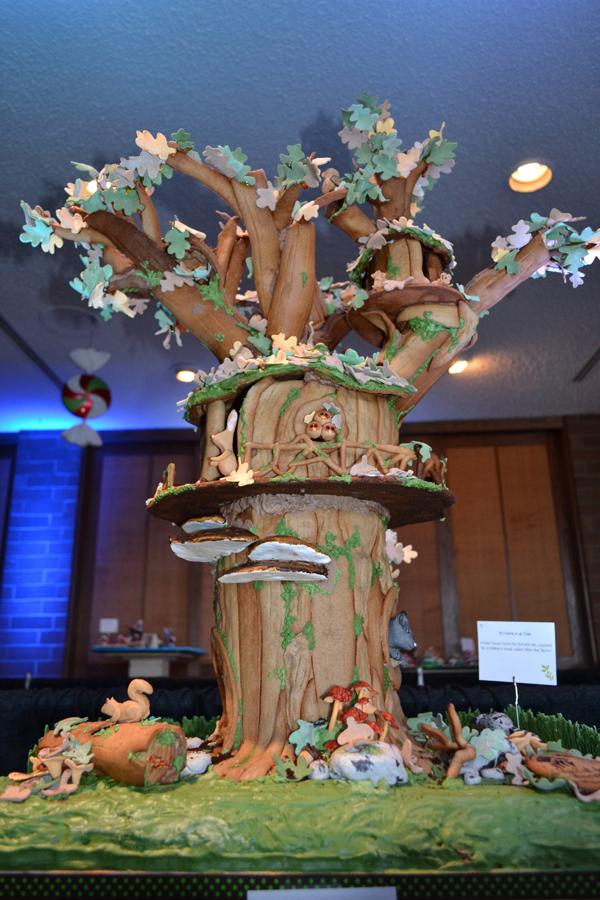 Not only is this event designed to give all bakers the opportunity to compete and for public viewing, but it is for a good cause. The foundation is rooted in more than candy canes and fondant, but also in raising funds for Habitat for Humanity Victoria. Originally the event had few competitors and was held in a mall over one weekend. Since its inception eight years ago it has grown in popularity with participants and the community alike. Five thousand dollars were raised last year for charity, and already this year they were at three thousand after only being open for eight days. The momentum of the contest and subsequently, fundraising, has increased yearly. With the inclusion of two new judges, renowned chocolatiers Dominique and Cindy Duby of DC Duby Wild Sweets, and with the competition now being extended to bakers across Canada, Canada’s National Gingerbread Showcase is becoming the annual and revered bake-off of the season. Avril Matthews, director of sales and marketing for the Inn at Laurel Point, offers that despite a high volume of traffic through the display rooms, this is the first year that the gingerbread houses have not been protected by the shield of glass. Although the bakers feel the stress of having their meticulously built houses in arms reach of children and adults alike, putting them in an interactive space with the public, better highlights the elaborate thought that went into their construction.

Crystal Duck, a self-taught chocolatier and pastry chef, has been a repeat contestant in this annual event for the last five years. An artist whose mediums encompass sugary variants such as truffles, cheesecakes, and chocolate barks, Duck has been the head director of all things sweet at Spinnakers for ten years. As the leader in creating unique and delicately crafted desserts, the opportunity to be part of the gingerbread house competition seemed a natural next step. When asked by Publican Paul Hadfield to enter the competition years ago, Duck had slight apprehension, as she had never before made a gingerbread house. For a woman who creatively, and successfully, blends ingredients like chillies and lavender with TCHO chocolate, and olive oil with house made ice cream, not having made a traditional gingerbread house seemed surprising. Alas, with an eye for perfection in everything she makes, the task to build a purely edible and personalized house, was a welcomed challenge. Fast forward four years of judging, with one win, one placing, and an honourable mention for her display was larger than the two by two foot size limits, Duck, has developed her own sense of aesthetic that stimulates her inventive vision and consistently pays attention to all small and intricate details. Seeking to achieve an impressive reaction from those that enjoy her treats, this year’s house replete with multiple stories, lighting, hand carved characters and a detailed oven, was nothing short of spectacular.

The display is shown five weeks leading up to New Years day, yet for Duck she has turned the competition into a full year hobby. Her creative process starts in February, a mere month after the previous years event closes. With a mix of ideas swirling in her mind, she narrows down to her favourite, and begins creating the templates in May. With the help of her partner Slater von Essen, the dimensions of the house are built into foamcore to help visualize the structure. Duck tries to have all the detailing and structural components complete by mid October, before she dedicates two weeks of holidays to her gingerbread house. While she justifies spending her time off  to building a house for charity, she can’t deny that bragging rights and a ribbon make the drive in her already competitive nature, that much stronger. With the event gaining speed you can expect that Duck and fellow competitors will already be starting, yet again, to get their arms deep in sticky and sweet gingerbread treats.

Visiting the gingerbread houses, donating to Habitat for Humanity, and voting for your favourite can all be done at Inn at Laurel Point: 680 Montreal Street between 10am-6pm.

Lip-smacking looks and punchy lemon flavour result in a seriously delicious gluten and dairy-free dessert. If you’re not up for making a ...
Read More