(Osoyoos, BC, April 20, 2013) – The first Canada-wide oyster wine pairing competition sponsored by Codfathers Seafood Market , EAT Magazine and Walnut Beach Resort was held this week and winners were announced during a tasting event at the Oliver Osoyoos Oyster Festival.

The inaugural competition saw over 80 entries divided into nine categories and was open to all wineries in Canada. The competition also included a “Wild Card” category where any alcoholic beverage produced with 100% Canadian product had the opportunity to enter.

The categories and winners for this year’s competition were:

“The judges all agreed that this was a great competition and some of the wines showcased quite well when paired with the raw Oysters,” comments Rhys Pender, MW and owner Wine Plus+ “We all agree that 82 entries in year one was quite an impressive number for a first year competition and we look forward to watching the competition grow.”

The Oliver/Osoyoos Oyster Festival is sponsored by Walnut Beach Resort and was created to showcase the sustainable oysters produced by the farmers and guilds of the nearby West Coast together with the award-winning wines of the Oliver Osoyoos Winery Association. Even oysters need a day in the sun! For more information on the festival visit online at: www.oooysterfestival.com or follow on twitter at twitter.com/cdnoysterwine. 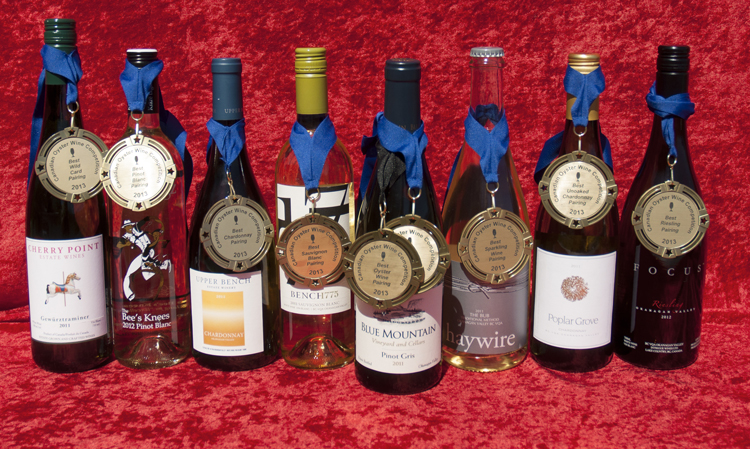 November | December issue on the stands. Read ...
Read More
For the ninth year in a row Rancho Vignola is setting up its Vancouver Island Harvest Sale here at the Mary Winspear Center in Sidney. Many of ...
Read More
Season’s Greetings EAT readers! We at EAT are looking forward to all the wonderful seasonal baking on offer around the city. One of the great joys ...
Read More
Masterclass Candied Citrus Holiday ...
Read More
For Immediate Release May  9th, 2013 Wild BC Spot Prawn Harvest celebrated in the Okanagan with the 3rd Annual Spot Prawn Festival from May 25th to ...
Read More