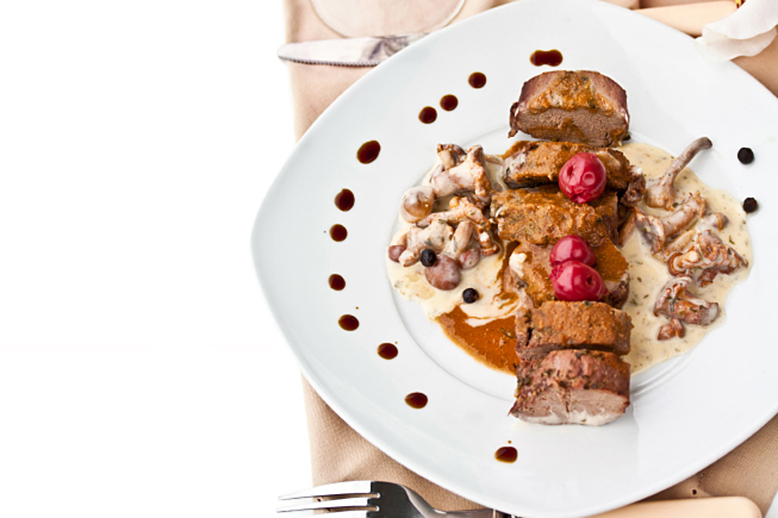 To prepare you’ll need to get a few things ready a couple of days in advance starting with the chanterelle mushroom crust and bacon.

For the mushrooms you’ll need to make a duxelle by finely chopping half a cup of mushrooms and one shallot. Sauté in some butter and deglaze with white wine until the pan is dry and everything is cooked through. Spread the duxelle onto a baking sheet and dry out in the oven at the lowest setting until almost all the moisture is out.

You’ll need 2-3 strips of thick cut maple bacon and 1/2 a cup of grand fir tips. Combine these two together in a zip lock bag with a scant amount of oil just to coat for a day or two. Once these two steps have been taken you can start cooking.

Lightly toss the wapato in some oil and season with some salt and pepper. At this step you can toss in some of your favourite herbs ie. rosemary, thyme, bay leaf  etc. Once it is caramelized and cooked through remove from the oven and puree in a blender. You will probably need to add some veg stock or water. Just adjust your seasoning. The flavour is similar to chestnut so you’ll have that sweet earthiness. 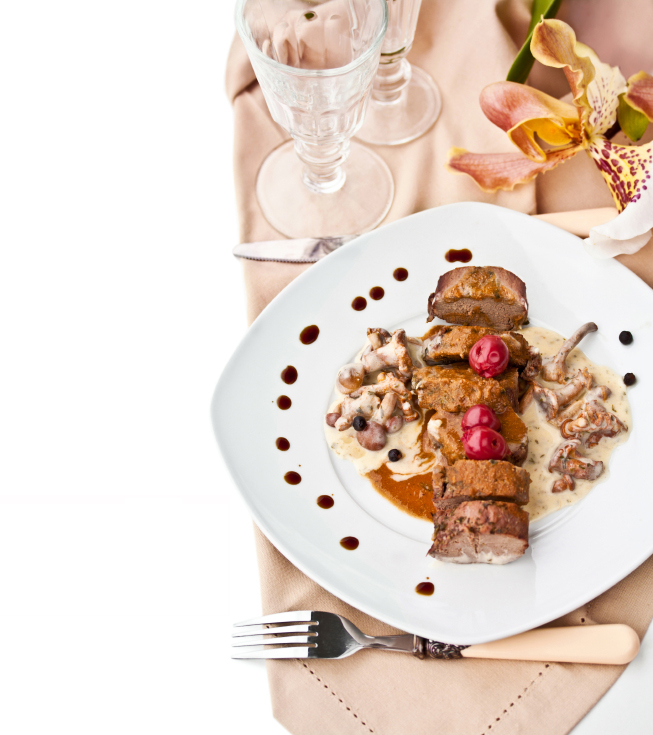 To prepare the pears, peel and core them leaving them whole. In a saucepan combine enough white wine (your personal preference) along with a few sprigs of rosemary and some sugar, again to your tasting, so that it will cover the pears. Slowly poach until tender to the middle and let cool in the liquid. Finely slice half an onion and sweat in some butter along with 2 cups of chanterelles torn in half depending on size. Deglaze with white wine and add some cream and a few fern like sweet cicely leaves and let reduce to a thicker consistency.

Rosehips are similar to artichokes for the fact that they have a furry center or “choke”. Remove this with the tip of a pairing knife making sure you have about a cup of these berries prepped. In a saucepan combine a cup or so of pinot noir and a little sugar along with the berries and slowly simmer until stewed or that they are on the verge of bursting. Remove the berries carefully and further reduce the liquid to a syrup consistency, you can use this on the plate for another element of flavour.

Season your venison loin well with salt and pepper and in a hot pan of oil brown all sides. Place the loin in an oven of 375 degrees and gently roast to an internal temperature of 140 degrees f or 60 c.

Remove from the oven and coat in the dried mushroom duxelle and let it rest while you finish the rest of the dish.

In a large enough frying pan on medium heat add a teaspoon of oil and your infused bacon that has been cut into lardons and slowly fry until crispy. At this time add in the greens. While this is happening take the pear and slice it then fan it out onto a parchment lined baking sheet and place it under the broiler in your oven to caramelize it quickly. In the pan that the venison loin was cooked in add the rosehip berries and lightly cook until they burst. That’s your sauce.

Spoon the wapato puree onto your plate, lay the wilted greens and bacon down in the center and next to that add the caramelized pear. With the onion and mushroom ragout spoon that below the puree making sure to remove the sweet cicely leaves before doing so. Slice the venison loin and fan that across the top of the greens and drizzle some of the rosehip jus on top. Take the pinot noir reduction and drizzle that around the plate as well.

Spinach and Herb Pesto Makes about 1 cup. 1½ cups finely chopped spinach 1½ cups chopped parsley 2 Tbsp lemon juice, about half a lemon 1 jalapeño ...
Read More
Perogies with Potato and Wild Mushroom, or Two Cheese Filling   This is my recipe for perogies with a fluffy, mashed-potato-infused dough—one ...
Read More
A classic Lyonnaise dish, dating back centuries. Served with a tangy red wine vinegar reduction sauce and tons of fresh herbs. This is my twist on ...
Read More
Lasagna noodles Ingredients 2 cups all-purpose flour or a combo of all-purpose and semolina 3 large eggs 1 tsp kosher salt 1 tsp olive oil On a clean ...
Read More
From the 2019 January | February Issue Serves 6-8 A combination of spicy, salty and savoury with just a touch of sweet, a good curry is one of my ...
Read More
Swiss Chard is a cool weather plant. Though once established, it grows well in the garden and can produce year round. Come spring, Swiss Chard will ...
Read More