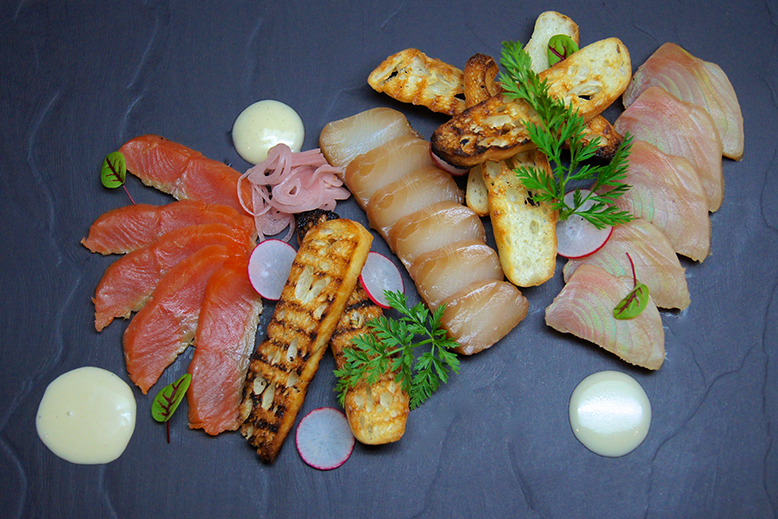 Charcuterie boards are right on the mark these days—think cured meats, spiced salamis, peppery-sweet sausages, creamy pates and rich terrines. Now picture the above and replace the meat with seafood.

In the last few years, “tail-to-fin” seafood charcuterie has been surfacing and it’s making a big impression on chefs and consumers.

Charcuterie is the craft of salting, smoking, and curing meat as a means to preserve it. Seafood charcuterie applies those same traditional methods, only with a twist. “It’s about taking it to the next level,” says Ned Bell, Executive Chef at the Four Seasons Hotel Vancouver and YEW seafood + bar. “Flavours and parts of seafood that have long been over-looked are finding their place in ‘seacuterie’.”

We asked Bell why he is excited about the seafood charcuterie trend. “First off, I hesitate to call it a trend,” says Bell, “it’s more about going back to how things have been done for millennium.”

In other words, chefs (and consumers) are re-appreciating an age-old process of preparing food, salumi style.

“Salting, smoking, and drying aren’t new techniques;” says Bell, “we’ve had a charcuterie board on the menu for years [at Four Seasons]. It includes cheese and meats, though now with our continuing hyper-focus on seafood, it’s been selling like hotcakes. We have some great octopus bacon at the moment.”

An exciting feature of seafood charcuterie is the playfulness with which chefs are approaching this ancient technique. “Chefs are getting more creative and trying new things,” says Bell, “fun things from lower down on the food chain—there’s nothing quite like a gorgeous, sweet, salted and brined mackerel.” 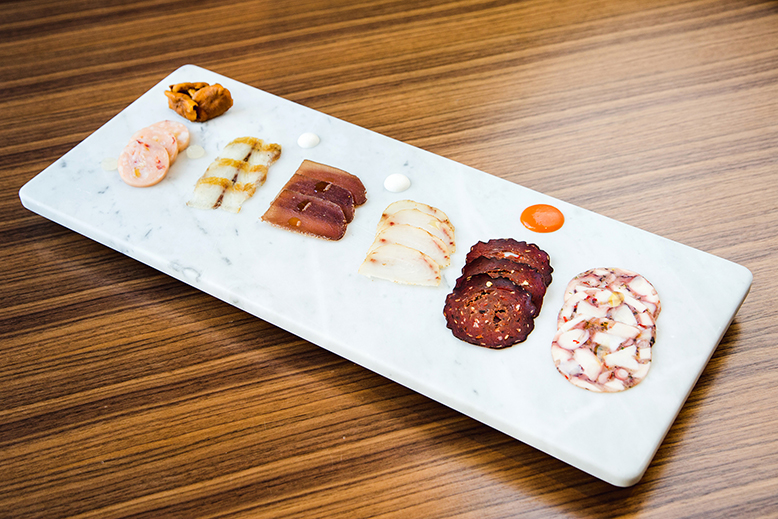 Executive Chef Rob Gentile, of Toronto’s Buca Yorkville attributes his inspiration for seafood charcuterie to traveling in Italy. The amount of seafood charcuterie Gentile encountered along Italy’s coastline presented him with a whole new, well, kettle of fish. “It was essentially salumi di mare (salumi of the sea. Some of the most incredible stuff I’ve ever eaten.” he says. As a result, the concept for Buca Yorkville was born.

“Buca’s first two restaurants (Buca King Street and Buca Bar) are known for their classic Italian fare: polenta, pasta, and prosciutto. Basically, we took what we do at our King Street location and flipped it with seafood,” Gentile explained.

Back to the playfulness of seafood charcuterie—Buca’s chefs have been having fun with all types of recipes; thanks to an impressive piece of equipment Gentile was able to get his hands on. “We’ve invested in a technology with which we can do a myriad of things,” says Gentile. While he agrees smoking, salting, and drying seafood is an ancient technique and tradition, “we’re just taking it to next level [with seafood charcuterie].”

This new technology, an oven by Enviropak can cook, smoke, bake, dehydrate, steam, and chill. “Essentially, it allows us to expand on and play with recipes,” says Gentile, “We’ve dehydrated sea urchin and later cooked with it to make broth. We’re experimenting with drying, fermenting, and hot smoking seafood.”

One of the key elements in charcuterie, or “seacuterie” is the effort to utilize flavour while wasting as little as possible (which ties into the increasing demand for sustainable, renewable food sources).

“We’re very much involved [at Buca] with our suppliers and making the right choices.” Buca sources their seafood from local fish markets such as Hooked and Societe-Original out of Quebec.

“In the Italian culture, nothing goes to waste. When you have something to eat, you find a way to make it all taste good. Take [for example] the tuna harvesting in Cicely— everything gets broken down. I was amazed with how much was used.” For Gentile, utilizing as much of the product as possible is where charcuterie gets exciting.

“I’m amazed at what gets tossed,” says Gentile. “When I’m having conversations with fisherman, I’m saying, ‘get me the garbage!’. You wouldn’t believe how hard it is to come by—the heart, roe, sound bladder, and stomach are thought of as garbage. Have you ever had braised tuna or cod stomach? People come in and say, ‘Oh my god, you have stomach on the menu?!’ But I make a braised stomach ragu that will knock your socks off. We had 10 pounds of tuna heart that we salted and dehydrated, and then grated over pasta—the flavour hit the next level.”

“We don’t have to drive a species into the ground,” says Gentile, “mass production of certain seafood has ruined the beauty of it.”

Fortunately, we are seeing a definite change in what chefs are presenting on the plate, and what consumers are willing to try.

“There’s a huge shift in awareness on the planet and a massive shift in what’s going into our bodies. People want to know what they are eating,” remarks Gentile. “I love getting something I’ve never worked with before, and figuring it out. Of course, you’re always going to get those people that just want a piece of fish [that looks like fish] and that’s when it comes back to us. It’s our job to get out there and talk to that person. Ninety per cent of the time, our guests will say ‘I had no idea lesser-known fish parts are edible and so tasty.’ Then I know I’ve done my job.”

“Do you want to know the most incredible thing I’ve ever eaten?” Gentile asks. “Swordfish fin. We took the fin, sliced it like salmon steak, and grilled it. It was full of beautiful marbled fat and just delicious.”

Buca Yorkville’s charcuterie menu includes cured fish such as hot-smoked eel, octopus salami with preserved lemon, dry-cured swordfish, and sturgeon with black peppercorn and juniper. Never a fan of waste and always one to seek creative uses for his food, Gentile has incorporated the bloodline—the dark strip of blood muscle that runs down the center of the fish—in a tuna `nduja, a soft, spicy, and spreadable salami, and fish marrow stuffed tortellini.

“One of my favourite dishes is aburi mackerel (seared topside),” says Kitamuri, “which I have on the menu. It’s salted and cured with rice vinegar then roasted in the oven.”

Another of Kitamura’s creations has been Konbu (seaweed) cured sea bream.

“I used bones and the head to make a fish stock and Nikogori jelly. It was served with cured fish and salad. It’s a take on a classic dish” says Kitamuri, “but I did not waste any parts of the fish for the entrée.”

“It’s exciting to have a different medium for preparing seafood,” Kitamuri says of seafood charcuterie. “As long as the flavour you are adding is about bringing the seafood to another level.”

It’s an exciting time in the culinary world as we continue to see creative interplays between tradition and invention. Consumers are placing more trust in the chef’s hands by embracing ingredients and techniques like never before. We’re shifting (ever so slightly) away from the customary poached or pan-fried filets of fish to delicacies that have simply been ignored for too long. Be prepared to start seeing swordfish, sardines, and spot prawns surfacing on menus where sustainably sourced, delicious cuts of seafood are front and centre.

Grand Opening of the Victoria Public Market at the Hudson Sept. 14th, 10AM Opening Ceremony, 11AM Ribbon Cutting We took a tour through the historic ...
Read More