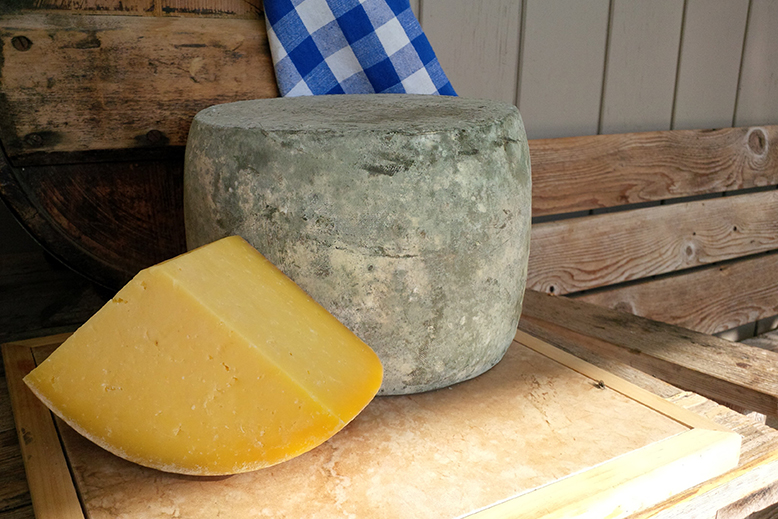 If you think all the great cheddars hail from the United Kingdom, think again.

This month’s feature cheese is a far cry from your average North American cheddar. From the rich, flavourful milk of their very own grass-fed Brown Swiss and Guernsey cows to the care given in each step of the cheese-making process, Farm House Natural Cheeses has set itself apart with its Clothbound Cheddar.

Debra Amrein-Boyes, head cheese-maker of Farm House Natural Cheeses in Agassiz, BC, is one of only three makers of clothbound cheddar in Canada.

“Because we are a small, traditional cheese creamery, we use the most original practices possible to make an authentic cheese,” she said.

Farm House does indeed make their Clothbound Cheddar the old-fashioned way. The milk undergoes a low-temperature pasteurization, so as to preserve its flavour and nutritional integrity. Once the cheese is pressed, it is smeared with purified lard and is swaddled in lard-soaked cheesecloth.

“The cloth bandaging actually allows a whole variety of molds to grow on the outside of the cloth and the lard,” Amrein-Boyes explained, “that all contributes to a more interesting flavour.”

Amrein-Boyes claims that cloth-binding adds a floral note to the cheddar, a characteristic that isn’t achieved with traditional wax-sealing.

The ten kilo wheels of cheese are then cold-aged for up to 18 months in custom-made, wooden cheddar molds. This process differs from industrial cheese-making processes in that an industrial-made cheese is inoculated with a culture rather than aged, for the sake of quick mass production.

While a longer aging period is preferred for the development of flavour, Amrein-Boyes explained that the demand for this cheese has it flying off the shelves sometimes as early as six months.

“We can’t seem to make them fast enough,” she said.

It seems that the impeccable balance of this cheese is pleasing plenty of palates across the province. Neither too crumbly nor too soft, its medium moisture content makes for an über-creamy mouth feel. The cheese’s saltiness is offset by its floral notes and hits the tongue with a nice tang.

Other well-known cheddars made in this style include Isle of Mull from Scotland and Montgomery’s from England. In Canada Avonlea Clothbound Cheddar made in PEI.

In keeping with tradition, Amrein-Boyes fancies big slabs of Clothbound Cheddar with a tall glass of ale and slices of hearty rye bread. Jonah Benton of Benton Brothers Fine Cheese recommends trying a slice with a popular Okanagan fruit. “It’s amazing with some of the apples that are just starting to come on the market this fall,” he said. If you fancy a drink, try pairing Farm House’s Cheddar with merlot-based red wines, or ales and stouts.

The article on L’Apéro in the May|June issue should have stated Chef Andrea Maiolo staged at The Courtney Room and Zambri’s and that he held the ...
Read More
May|June issue on the stands. Read ...
Read More
Where to go the day after… you know. Victoria is a patio town: great weather, a robust craft beer industry, and oceanside views. The catch is, ...
Read More