The tables are covered in white linens with immaculate place settings but it’s the astounding view of the Oak Bay Marina that makes me pause a minute, silently thanking nature for being just so darn pretty. I’m here to speak with Jeff Keenliside, back as the Marina’s Executive Chef, and I’m slightly nervous because of the formal feel of the space. Five minutes later, he’s sitting across from me wearing a casual white t-shirt that exposes tattoos and has a pint of Driftwood’s Fat Tug in front of him – I can relax. We start chatting and, despite scouring online to find the impressive list of his personal experiences as a chef, I’m again amazed by how much he has accomplished – and how deep his passion for food is. Originally planning to be an accountant, through part-time jobs in dish pits and eventually kitchens, he realized how much he enjoyed cooking and consequently re-directed his career goals. In 1995, he began an apprenticeship at the Aerie and later moved over to Cafe Brio, which was just opening, to work under Chef Sean Brennan. It was there he developed an appreciation for using seasonal and organic local produce, a value he has carried with him throughout his career. He finished his apprenticeship and continued working at Brio until he was offered the Executive Chef position at the Marina in 2005.

During his (first) time at the Marina, he was one of the first chefs to include Ocean Wise, a sustainable seafood program from the Vancouver Aquarium, on his menu. He received honours as Vancouver Islands Chef of the Year, was Vice President of the Island Chefs Collaborative (ICC) and worked diligently with local farms and independent farmers. He thoroughly enjoyed the kitchen, his staff and the overall organization of the Oak Bay Marine Group (OBMG) which owns eight resorts and several restaurants. However, feeling at the time that there was not as much room to grow in his position, and having a curiosity for a deeper challenge, he left on great terms and went on to open his own restaurant, Lucy’s in the Square.

Lucy’s was very successful, in a short period of time, with limited funds. Having worked every position in the industry (line cook, dish washer, chef, dessert, front and back of house) he thought he knew what to expect. To say the experience was an eye-opener would be an understatement. He quickly realized that being accountable to the staff and the administrative side of being a business owner was much more than anticipated. Despite closing their doors a year and a half later, it wasn’t with a sour taste in his mouth and he holds absolutely no regrets. 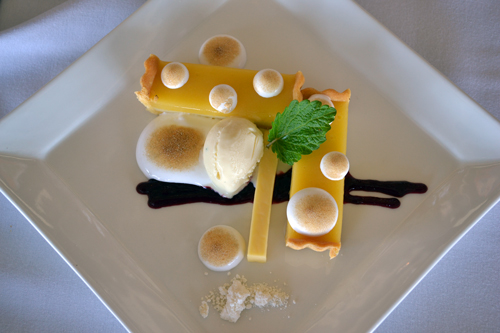 After Lucy’s there were few opportunities in Victoria for someone with Jeff’s level of expertise. While taking some time to reassess what he wanted to do, a position came up to help re-work and re-launch Maude Hunter’s. A place he remembered from his days as a dishwasher, he signed up and offered his knowledge and assistance for the next ten months. Before he was asked to return to the Marina, he recalls thinking over all the jobs he had done and, if granted the opportunity, he’d love to return to – the Marina was on that list. So, when contacted by OBMG about coming back, there was no question whether to accept or not. With the OBMG thinking of establishing a Corporate Chef position to oversee all of the properties, there are many opportunities to continue pushing himself. As someone who not only welcomes, but is drawn to challenging situations, returning feels like a whole new chapter.

In the upcoming months he will be re-working the current menu by including more seafood options to help fulfil his desire to make the Marina the seafood destination in Victoria. I asked him how he plans to increase appeal to people who may view it more as a formal “special occasions” place. While still working out the details, the concept of a Crab Feast is slowly coming together. With a bucket chock full of mussels, clams, crab and some frites on the side, guests will empty the bucket onto a brown paper table cloth and dive in – much like you’d do on the piers of Seattle or San Francisco. A fun way to enjoy some of the best seafood the West Coast has to offer. Speaking of quality seafood, all of the crabs they serve are kept alive in the ocean outside the restaurant. Handpicked from the salty water after you order, it is as fresh as you’re likely to find.

I had the opportunity to sit down and have a quick lunch with Jeff during our meeting. I opted for the Tuna Tataki, an item that he added to the menu around the time he returned. The tuna, appropriately seasoned, was seared the way it should be—thin crust with a soft, melt in your mouth textured centre — and finished with a delicious miso ginger vinaigrette. Served with fennel and jicama slaw on the side, it was the perfect flavour and size for a light lunch (actually more filling than I had originally thought). Admitting to needing some veggies, Jeff ordered the Baby Arugula and Beet salad – full of toasted walnuts, goat cheese and quinoa for protein. I was going to politely decline one of the fabulous desserts made by pastry master Brian Bradley that was until I saw the Lemon Tart. Citrus anything and I turn to putty. The tart was served with goat cheese, cardamom ice cream, meringue, blackberry port reduction and, may I add, had the perfect crust – chewy but with a slight flakey outside. Jeff assured me that with Bradley’s talent and ten years’ experience at the Marina, every dessert, pastry, and baked good made in-house rivals the incredible lemon tart.

Walking back into a kitchen that has a professional crew who take pride in what they do and how they operate has been a pleasure for Jeff. He currently has four apprentices signed on to learn flavour pairings, menu building, and how to integrate seasonal and organic produce into a menu from him. For a man who has grown to be a culinary staple on the Island, it’s exciting to see his return to the beautiful and respected Marina.

With Phase 2 beginning, restaurants and patios, tasting rooms and coffee shops are reopening. This is an ongoing process, with many changes, so we ...
Read More
A delightfully different private evening in the River Market at  Westminster Quay featuring Spring Release wines from the Naramata Bench, along ...
Read More